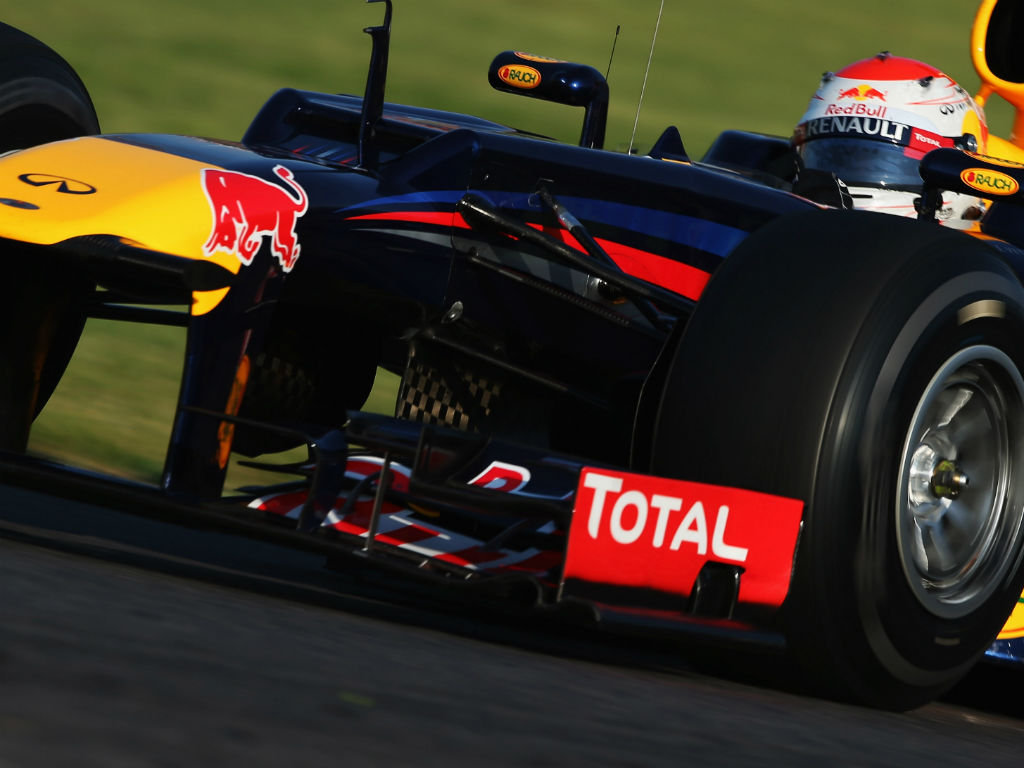 Red Bull:
Sebastian Vettel: “It’s been a fantastic weekend. Yesterday’s qualifying was perfect and today again, the balance of the car was amazing. We didn’t change too much at the stops; it just seemed to work fantastically well. I’m very happy, the guys have been pushing very hard and even though we didn’t have major upgrades here, it still seemed to come together and the balance was there – and that’s what made the difference today. It’s a shame for Alonso, it’s not something you hope for and it could happen to us at the next race. We’ve seen this year there are a lot of up and downs and things change quickly – we have to keep our heads down and take it step by step.”

Mark Webber: “I haven’t seen what happened at the start, but it’s been confirmed that it was Grosjean who hit me. We’re trying to fight for results each weekend and it doesn’t help so, yeah, it’s frustrating as a few of the big guys suffered out there today. We went onto a one stop strategy from then on, but I kept pushing, I didn’t give up and got something from it. To finish eight seconds off fifth, after the fact I was in reverse at one point – and also the safety car came in before I caught the back of the field – was something. I’ll come back in Korea.”

Ferrari:
Felipe Massa: “It was a fantastic race! Being back on the podium after almost two years away is just great and I feel really uplifted. They have been two tough years for me and, sometimes, a million things go through your mind, some of them bad, but finally I can be happy! It’s an important result psychologically and also in terms of my future, at least I think so! It’s even better getting back on the podium here, at a track I like so much and that I have known since the start of my career. Sometimes, in the hardest moments the best things come: the first people I want to thank right now are my family, my wife and my son. This race motivates me even more for the rest of the season. I feel very sorry for Fernando, because I’m convinced that today we could have both been on the podium. After what happened yesterday in Q2, I was definitely not starting from a good position. I got a good start and managed to get through the chaos at the first corner unscathed and then I immediately felt I had a good pace and that I could keep close to Button and Kobayashi. I got past them at the pit stop thanks to a great strategy and immediately I realised that, even on the Hard, my pace was competitive. The team did a great job and provided me with a competitive car: the only difficult moment of the weekend, for which we still don’t have a reason, was the damned second run in Q2… Now we must focus immediately on the race in Korea, because with five races left to go, anything is still possible.”

Fernando Alonso: “Today, we were very unlucky: to finish a race like this, at the very first corner is really a shame. Contact from Raikkonen caused a puncture to the left rear tyre and my race ended there. Unfortunately, when you start in the middle of the pack, these things can happen, because apart from the performance of the car -and ours is usually better on Sunday – circumstance can count for a lot. That could be seen from Felipe’s race, who started tenth, but produced a perfect race, fighting with the fastest cars. Clearly, this result has practically wiped out the advantage I had before, but if I’d been told at the start of the season that we would have been in this situation five races from the end, I’d have happily signed for it! Clearly, we must work a lot on the development of the car: I’m not worried, but we must react to the step forward that the other competitors have made. Now we start a sort of mini-championship, run over five Grands Prix. The aim will be to score at least one point more than all the others. What happened to us today could happen to the others next time: the wheel turns and that is what races are all about.”

Sauber:
Kamui Kobayashi: “It hasn’t sunk in yet, it is hard to believe – I achieved my first podium in Suzuka! It was a fantastic race and we have been working really hard to get to this point since we were lacking pace on Friday. But the Sauber F1 Team did a great job to recover from there. Starting from third obviously helped a lot and also the long run I did on Friday made me very confident for the race. The team has built a great car this year. You can tell this from the podium finishes my team-mate has had. At times I was close to that as well but I never had the luck. It means so much to me that it finally worked out. Maybe from now on things will be easier. I had a very long last stint today and Jenson (Button) changed for fresh tyres later. My rear tyres where really bad in the end and I had a lot of oversteer. But regardless of this I had to push to defend my podium place. Only during the final lap did I allow myself to really think I can keep him behind me, because then the best overtaking opportunity at the end of the straight was over, and then I saw all the fans and the raised hands. It meant a lot to me and I want to thank the Japanese fans.”

Sergio Perez: “I feel very sorry for the team. It worked well when I got passed Lewis Hamilton for the first time on lap six, but then it didn’t when I tried it again. Lewis went quite late to the inside and I had only room on the outside. But it certainly was my mistake. The race didn’t start too well for me either when Romain Grosjean caused a mess and I lost positions.”

McLaren:
Jenson Button: “Fourth definitely isn’t a bad result – particularly considering I started from eighth. I ran as high as third during the first stint, but in hindsight it was probably an error to make our first pitstop so early. Both Kamui [Kobayashi] and I were compromised behind a Toro Rosso, and that cost both of us a bit of time to Felipe [Massa]. He’d started on a brand-new set of tyres, and that makes a big difference: you can go longer and keep the speed up, so he was able to jump both of us after the first stops. Towards the end, I was able to push and start catching Kamui. But he controlled his final set of tyres very well – I could get close to him, but the only way I was going to get into the DRS zone was by braking extra-late into the chicane, and, every time I tried, I locked up and ran wide. Still, this result isn’t too bad – we got some more points – we just didn’t have the pace to go for the win today.”

Lewis Hamilton: “Congratulations to Jenson – he drove well all weekend, and, between us, we got some decent points for the team today. I was very fortunate to stay out of trouble at the start; there were lots of cars going off the track, so I just concentrated on bringing the car through undamaged. I pushed as hard as I