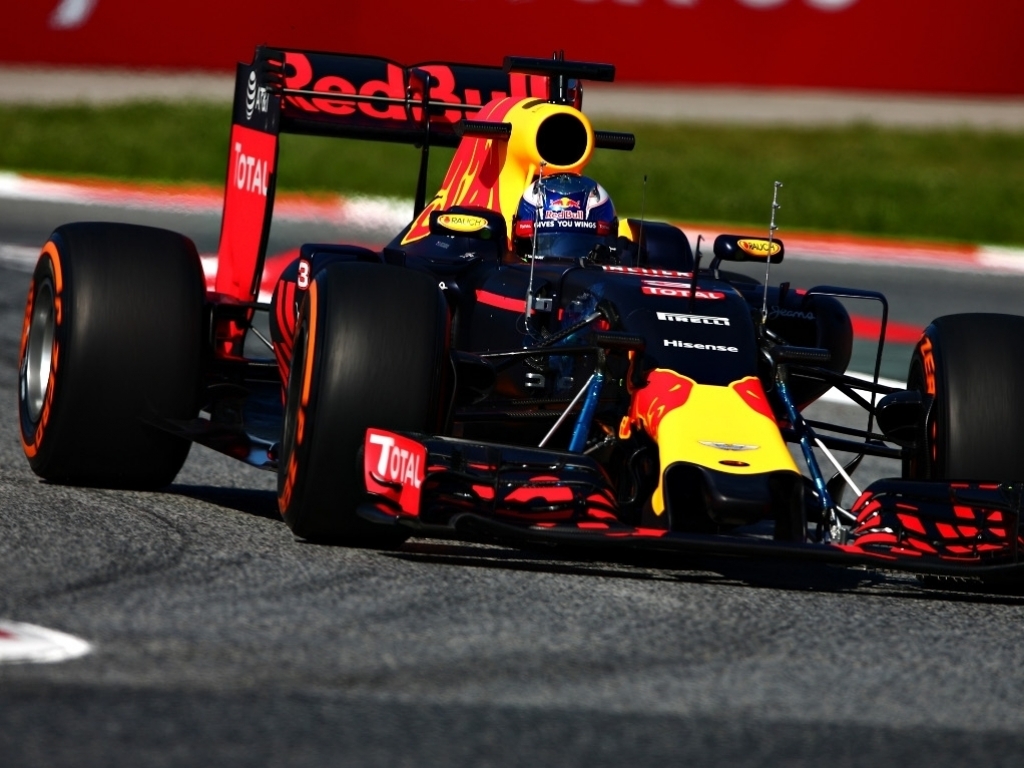 Red Bull driver Max Verstappen became the youngest driver in the history of the sport to win a Grand Prix as Ferrari failed to capitalise on Mercedes misfortune.

Red Bull:
Max Verstappen: “It’s a very special feeling. Of course I didn’t expect to win; after the Mercedes pair crashed then you’re targeting a podium, but in the end to come out on top, it’s incredible. To hear the Dutch national anthem for the first time in Formula One, I have to think about my dad for sure and I heard he was crying, so yeah it’s unbelievable. He invested a lot of time in me and this achievement is also because of him. I wasn’t nervous during the race, I was just trying to focus and drive the best I could. We focused a lot on keeping the tyres alive because at my last stop I still had to do 32 laps until the end, but it worked out well! With five laps to the end I saw Kimi was dropping off a bit, he tried a few times and of course it kills your tyres and from there I just like ‘okay, focus on the tyres now and bring it home’. I will for sure remember this and at the moment it’s just a great feeling. It’s amazing, I have no words for it. It was very good company on the podium, I mean Kimi even raced against my dad, so it’s very funny! I was celebrating a lot on the in lap and I got a bit of cramp, but that’s part of it!”

Daniel Ricciardo: “Mixed emotions today, for sure. Some of it was just bad luck today, I was leading and then went on a three stop strategy, which meant I had to try and pass three cars on track, which isn’t easy. Seb had already jumped us on the pit stop, which resulted in more overtakes to get back to the front. In hindsight, a three stop strategy was the wrong thing to do, but maybe during the race it seemed like the right thing to the team. I wasn’t content sitting in fourth so I tried to pass Vettel, I had a crack, but it didn’t work out. It really sucks to not even be on the podium and then the puncture at the end just rubs salt in the wound. It’s a big day for Max with his first race win, so congratulations to him. He got the job done, everyone questioned the decision during the week but he has proven today that he is a top class driver. It’s not hard for me to see Max on the podium, it’s just hard not to be there myself. Let’s move on to Monaco and hopefully we will both be on the podium next time.“

Ferrari:
Kimi Raikkonen: "I had a poor start, with massive wheel spin when I released the clutch. I managed to recover some places in the first few corners and then I caught up with Max pretty easily. The car was ok and the speed was good, but once you are following another car for many laps this doesn't help the tires and I was missing a bit of grip and downforce. It was a struggle to follow him close, I never really had a good run on him out of the last corner because he was really fast there. It's a bit disappointing when you get that close and you don't win, but after a difficult weekend we have to be somehow happy for this result. As a team we keep working as hard as we can and try to get the wins, we keep fighting and when we have difficult weekends likes this one, we have to keep the fight alive and be up there to score points. Max really deserves this win, for me he's not a surprise. He was doing a very good job already last year and today in a better car he was able to win."

Sebastian Vettel: "Today there was a big chance to win the race, so definitely I was attacking to win, that was what I was hoping for. But that lasted up to the point where I came out after the last stop and I realized the advantage I had, with a set of tires that were a couple of laps fresher, over the guys ahead was practically not there. We struggled on the Medium tires, where Red Bull was strong, and this is the reason why Kimi and I couldn't attack, but we were very strong on the Soft tires. We decided to split the strategies between the two cars: I went for the three stop strategy, then I tried to attack the leader and I succeeded, but in the end both Daniel and myself came out behind the two stoppers. So all in all we were lacking pace, which is something we need to understand. There is nothing wrong with our car, it's good, it works well, and the stuff we brought here seems to work. My congratulations to Verstappen. The first win is one of the best moments you can have, it's something really special. So 'chapeau', Max managed to stay ahead, even if he had a lot of pressure from Kimi."

Williams:
Valterri Bottas: "I think we got the maximum today and I’m pleased to get decent points. We know our car wasn’t quick enough this weekend, but we had a good result, so that’s positive. Of course we would like to battle for the podiums and wins, but it wasn’t possible this weekend. We need to keep pushing on the development and we need more pace on these type of tracks. We knew that if something happened we could gain a couple of places, otherwise it was always going to be tricky, but this is racing. A lot of things can happen and this time we took a small advantage from it."

Felipe Massa: "It was definitely a very good race for us with some good points, finishing eighth positon from starting 18th. It was a difficult race, and not on our best track to finish in the points, so I’m happy. I know we’ve lost points compared to Red Bull, but that’s the way it is. I am really happy for Max. I know what it means to win for the first time, and he is only 18-years-old at a top team. Looking forward to Monaco, I hope we can show that we have a better car for that type of track, as we have struggled there over the last two years. Monaco is Monaco though and anything can happen."

Toro Rosso:
Carlos Sainz: “What a fantastic race! We finally put a whole weekend together – we had a productive Friday, were fast in Quali and had good pace in the race today – and I’m a very happy man! P6 is an amazing result for me and the team, and to achieve this at my home race makes it even better. The start to the race was great, I think I did one of the best race starts of my life to be honest, running in a podium position and battling with Ferrari… Those first laps were really nice! I felt comfortable during the rest of the race, the team did a very good job with the pit-stops and I had a big smile on my face when I crossed the line in sixth position. I’d like to thank all the fans that have shown their support all weekend here in Barcelona, especially to those who came to my grandstand at Turn 12, they really gave me an extra boost. I’d also like to congratulate Max on his win today, I’m very happy for him and the Red Bull family – I think it’s great that Red Bull brings young talent into Formula 1 and we keep succeeding, proving them right.”

Daniil Kvyat: “It was a good race for us today. We had to give two positions back at the restart of the race, so we lost a bit of time there. But a part from that, the pace was strong and we were competitive. It’s positive to be back and to finish in the points straight away. The car felt good and it didn’t take me a lot of time to get used to it. The second half of the race was fun, following the leaders without interrupting their fight, and I was able to overtake Gutierrez and get back into the points. The team also did a great job with the strategy and I’d like to congratulate them for this. It was a very productive day for the team, overtaking Haas in the Championship, so all in all, a positive weekend and we will continue fighting.”