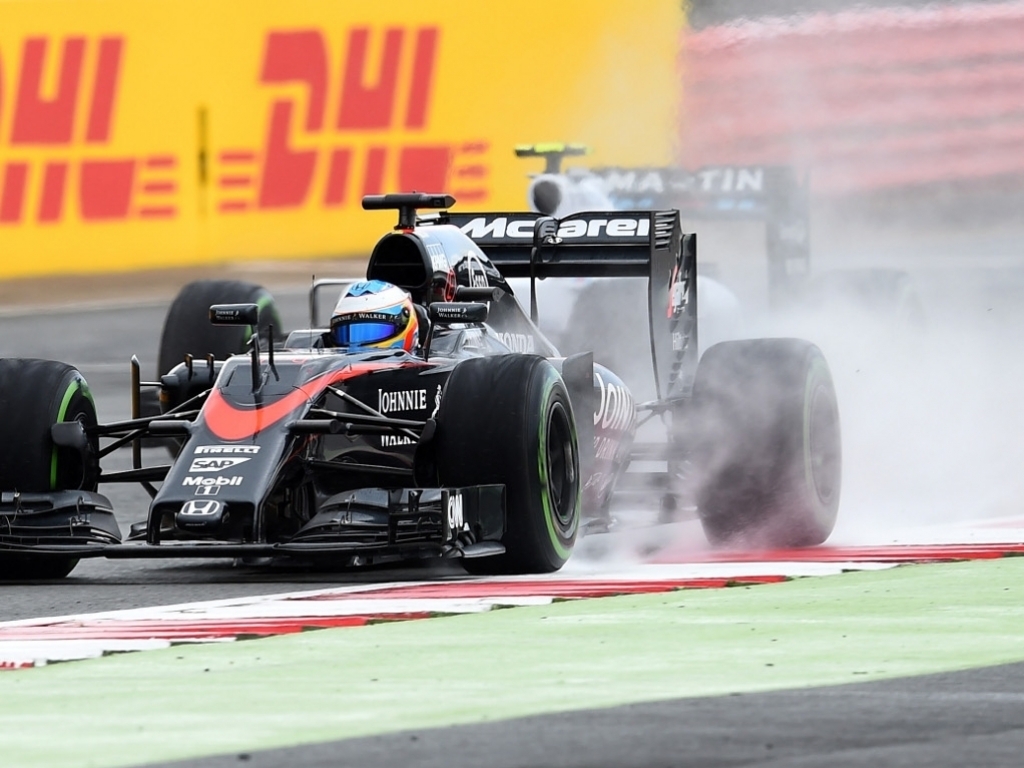 Daniil Kvyat was the sole finisher for Red Bull, but Fernando Alonso claimed McLaren's second top 10 finish of the season.

Red Bull
Daniil Kvyat: "We were really competitive today, the race was really fun, a little crazy with the rain, and I was enjoying myself. The team have done a great job and the car is handling really well. We will keep pushing to improve and move forward over the next few races."

Daniel Ricciardo: "I was really optimistic and excited for this weekend but it didn’t work out for us on the day. We suffered an electrical problem which forced us to retire. I could feel the loss of power going into turn 7, we tried circulating for a few laps to try and fix it, we also tried to reboot the engine in the pits but unfortunately it didn’t work. The last few races haven’t been kind to us but that’s racing. We have some time off to look forward to and we’ll go into Hungary a little more hopeful as the track there should suit us better."

Force India
Nico Hulkenberg: "That was an entertaining afternoon and it’s great to come away from our home race with a good bunch of points. My start was sensational – maybe the best I ever had in Formula One – and I rocketed up to fifth place ahead of the two Ferraris. I was able to keep them behind me for the first stint, but they had too much pace and were able to use the strategy to jump us by pitting early. When the rain arrived at the end of the race the track was very slippery. I was a bit unfortunate with the timing because I had just passed the pit lane entry when the rain became really heavy and I had to do a full lap before I could change to intermediates. Overall, though, I think seventh place is a great result and we should be satisfied. A lot of the performance today is down to the updates we brought here. It’s moved us in the right direction so I have to say a big well done to the team."

Sergio Perez: "Finishing with both cars in the points at Silverstone is a very positive step for the team. We probably could have been even higher up, but the strategy didn’t really work out in my favour. After my first stop, I lost a position to Sainz and I spent a few laps stuck behind him when my tyres were at their best. I was in the dirty air and struggling with the front tyres, which had a lot of graining. When the second rain shower came we had a lot of discussions over the radio about what call to make and unfortunately we waited too long, which cost us a place. When you get opportunities and you don't make the best of them you are obviously disappointed, but I think we should focus on the positives of this weekend. We’ve shown good progress and there is a lot of potential for the second half of the season."

McLaren
Fernando Alonso: "It’s not the best of results, but 10th position helps to motivate everyone. The whole team is incredibly focused – they’ve been working day and night to improve the car – and we all know this is a long-term project, and there are no magic solutions, but to get a decent result, and to put some points on the table, is always important. The start was unbelievable. It was a big mess as we arrived at Turn Three. The two Lotus drivers were far too aggressive, and they touched each other; in avoiding them, I had a half-spin, and touched Jenson. There were a lot of retirements, and little common sense on display. Still, we know we’re improving, and today has been a good day for morale."

Jenson Button: "On lap one, there was an incident between two cars at the apex of Turn Three. Fernando tried to move to the right in order to miss them, and in so doing I think he lost the rear end and clipped my rear tyre. The impact lifted the car up and turned it off. With the engine not running, I had no option but to retire. When you start towards the back, there’s always a greater chance that incidents may occur because the closing speeds between cars are much larger. I just want to add that the crowd has been amazing all weekend – they were even clapping and cheering me after my race. It’s been such a nice atmosphere – very special – and I just wish I could have done more for them today."