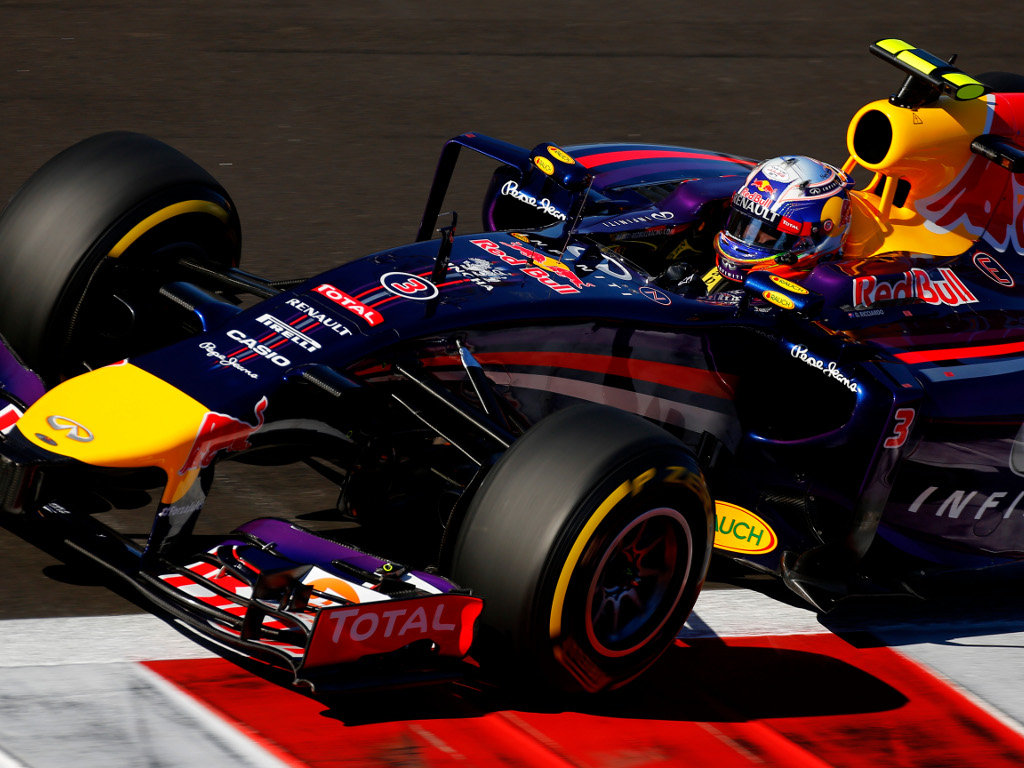 Red Bull:
Daniel Ricciardo: “The first few laps were pretty hectic and we lost a few places at the start. We will have to have a look at that, it’s nearly the end of the season now, but we haven’t had many good starts so that’s a bit frustrating. Starting the race the tyre was already blistered, it had quite a bit from qualifying, so it wasn’t looking too healthy and the first stint made it worse; I could see it starting to come apart, so we had to pit quiet early. Then on the prime the tyre lasted well and we had good pace and could match Alonso, but couldn’t get past. Congrats to Mercedes – it’s been a dominant season by them, so hats off to them.”

Sebastian Vettel: “I had a good start and then a tough battle with Daniel, but from then onwards the speed was nothing special, we had the same issues as we had in qualifying. I was alone for a lot of the race, the beginning was entertaining, but after that it wasn’t that busy. Congratulations to Mercedes on the title, they deserve it.”

Force India:
Sergio Perez: “It was a very hard race and a very hard-earned point. We tried our best to push throughout the race, but obviously the fuel strategy was quite marginal – especially because I started the race on the medium and had to really push to keep in touch with the group on the softs. When I was on the softs, it was hard to save fuel because I had to defend from Felipe [Massa] who was behind me for the whole of the second stint. So it was a hard afternoon, but hopefully we can be in better shape for the coming races.”

Nico Hulkenberg: “It was quite a difficult race for me today. We started pretty far back on the grid and I was struggling a little with my straight-line speed compared to the cars with which I was battling. We were doing well in the corners, but losing a bit of ground on the straights, which made it difficult to overtake, especially on a track like this, where the straights are the only good passing opportunities. We could have probably finished in a higher position had it not been for this. We will need to regroup and come back stronger in Austin.”

Toro Rosso:
Jean-Eric Vergne: “It was an extremely frustrating race. We have to understand why we had to save so much fuel. It’s a real shame because the guys did an excellent job giving us a very good car, which I felt was great for the whole race. The start was very positive, we were attacking as much as possible but then I had to stop doing it, even though I felt I could really do a great job. We have to move on to the next race in Austin, where hopefully we will be able to extract the maximum out of the car.”

Daniil Kvyat: “It was a tough race. Apart from the fact that I could not find immediately the right grip, we had to care too much about our fuel consumption compared to the others. This is something that we will have to understand, so as not to lose performance for this reason in the future. Last but not least, I also had to pit again towards the end of the race, losing even more positions. I would have liked to do much better here in Russia, in front of my own crowd, which really made me feel their great support. Regardless of the disappointing final result, it was great to race in such an amazing structure, with an excellent organization.”

Sauber:
Esteban Gutierrez: “It was a clean race with an interesting first part. We were betting on having a safety car period during the first stint, and this is why we extended this run. It was not ideal for the strategy, but we took that risk and hoped to gain an advantage. In the end, the safety car did not come out. Although I think the way the tyres were behaving and the way the car drove was pretty enjoyable, on the other hand finishing in P15 was very frustrating, after a race where almost everything went very well. However, we will keep fighting until the end of the season to have a chance to score points.”

Adrian Sutil: “The start on the medium tyres was difficult, as I had almost no grip. In addition, several drivers behind me put the soft compound on, which was a clear advantage. In Turn 1 I had no space and was forced to drop back. It was very slippery on this set, I lost some time in every corner and, as a result, positions. We decided to go for an early pit stop in order to change to the soft tyres. Afterwards I was able to continue the race without major incidents, although the grip level reduced towards the end. We knew that the start on the medium tyres was a risky strategy in case there was no safety car period. In the end, no safety car came out. However, it was in general difficult to finish the race in the points with our pace. We still need to do our best during the upcoming races.”