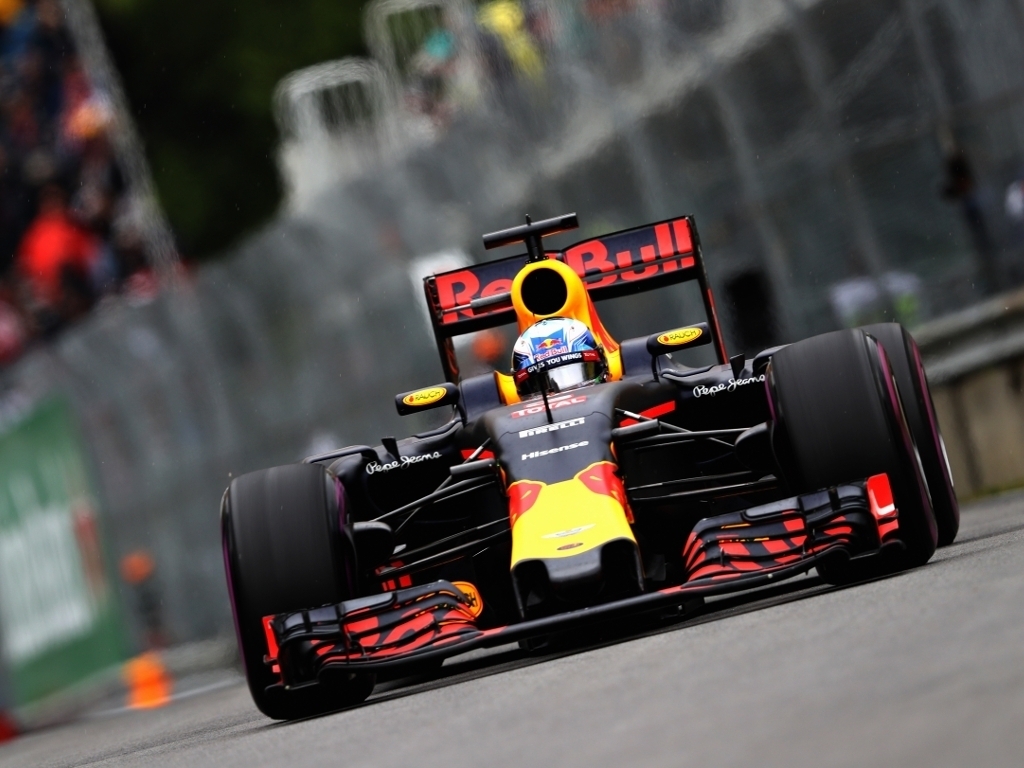 Red Bull:
Max Verstappen: “We did what we could today and that was a great job. We wanted to finish on the podium in front of the Williams but soon realised we were suffering with a bit too much tyre degradation. I think a little bit of rain could have helped us today. At the beginning I saved my tyres and fuel as I knew I could not stay with the front two. When Daniel got close behind I then decided it was time to push. I am very satisfied with my performance but also with the new power unit, you could see it was hard for the Mercedes to try and pass on the long straight so we are making good progress. The last ten laps I really enjoyed, I would actually say they were the hardest ten laps of my life. I was in fourth for a very long time so didn’t want to give up that position. It was a very hard battle at the end of the race, his [Rosberg] pace was very strong but we managed to keep ahead and then the last lap was pretty spectacular. After Monaco it’s nice to leave this race with a big smile on my face. Now looking ahead to Baku it’s a new experience for everyone so we have to wait and see how the grip levels are but today was definitely positive for us.”

Daniel Ricciardo: “The start initially was okay, the Mercedes were really slow so there wasn’t really anywhere to go and then out of Turn 2 with Rosberg coming back on, I had to go on the inside, Max was on the outside and then I lost a position there. Then we were a bit quicker than Max on the first stint with the ultra softs and I said I could be quicker if I had clean air, but after my first pit stop I locked the softs and ruined that set of tyres. I came in again and had traffic to Kimi, we were able to stay with him but damaging the tyres too much to really make an impact and pass. I think we didn’t have the best race today, fortunately in seven days we’ll get another chance. We definitely need to make it a better Sunday in Baku. I’m always excited to go to a new track. It’s a street circuit as well so it should be fun.”

Force India:
Nico Hulkenberg: “I’m happy to score points, but at the same time I was hoping for a bit more from the race because I really believed we could challenge the top six. For some reason the car didn’t feel as good today as it did during practice and qualifying. Maybe it’s because the conditions were so cold and windy, which meant we lost the sweet spot and the car was not easy to drive. That’s something we need to look at in more detail and understand. At the start I didn’t get off the line very well, but I had a great first lap and recovered some positions. Then, the story of my race was simply tyre management. I think we made the right calls with the tyre strategy because even though we wanted to try and one stop it just wasn’t possible in the end.”

Sergio Perez: “It was a difficult race and looking back I don’t think we chose the optimum strategy. We tried to go down a different route compared to everyone else, but the cooler track conditions didn’t help: it was very difficult to get heat into the soft tyres during the first stint and that cost me a few positions at the start. I got stuck behind the two McLarens and that hurt my race. I lost a few seconds at the final stop when I briefly stalled the car and that dropped me behind Kvyat, but I managed to get the position back with an overtake going into turn one. In any case, to bring both cars home inside the points is a good result for the team, especially when the weekend doesn’t really go your way. We gave it our best and we have come home with points in the bag.”

Toro Rosso:
Carlos Sainz: "A really good race for me today here in Montreal! If you had told me before the race that I would have finished in P9 after starting P20, I would've probably signed immediately! I'm really happy to have made it back into the points, I enjoyed it a lot out there. We chose the right moment for our first pit-stop, going for the undercut, and I then did five or six qualifying laps on the Soft tyre, which allowed me to overtake five or six cars and keep up with the Force India. Even if I hadn't made yesterday's mistake in qualifying, more than a P8 this weekend was impossible, so we can be happy and satisfied with our weekend. A result like today's shows that we are strong and that we are constantly improving. Today we did the right strategy and good pit-stops, so I'd like to congratulate the whole team for this weekend, it's been great!"

Daniil Kvyat: "If I say the truth, it was quite a boring race today. We were trying to fight for that last point with Perez, but they were just that bit faster and we didn't manage to get in front of him. We then switched to the Ultrasoft tyres for the last stint, but the set didn't quite give us what we expected and they got destroyed while battling with the other cars around us. Unfortunately, I spent most of my race stuck behind a car and in traffic… Luckily the next race is just around the corner, so we can start thinking of that straight away and forget about today. But looking at the positives, it was a clean weekend for me, something which I needed. We were able to finish the race, as well as get important data for myself and the team, to learn as much as we can. We now need to start showing some performance and I hope we do this starting from Baku next week."

McLaren:
Fernando Alonso: “A tough race – we didn’t have the pace to be competitive today. I enquired about the possibility of fitting fresh tyres for the last few laps, but I guess it was a little too much of a risk: at that point we were 11th and stood to score a point or two at the end if something were to have happened ahead of us. Still, I’d done more than 50 laps on those tyres – and the two-stoppers were a lot faster than me. I guess we were a bit unlucky – we really needed some rain or a Safety Car to put us back in the fight. Ultimately, I think our strategy was the right one – it was the quickest way home. Anyway, we’ll now work hard to try to improve the pace for the next race.”

Jenson Button: “I radioed in to say I had a terminal problem, and I looked in my rear-view mirror and saw a lot of smoke and sparks. I had no warning – the car just failed as I came out of the hairpin. The engine was still running, but I turned it off anyway. It’s a shame, since I was saving a lot of fuel at the time, and I had DRS on every lap too, so I could save even more fuel. That could have made a massive difference later in the race. It’s so often the way, though, isn’t it? You save a lot of fuel for later in the race, but it doesn’t last…”