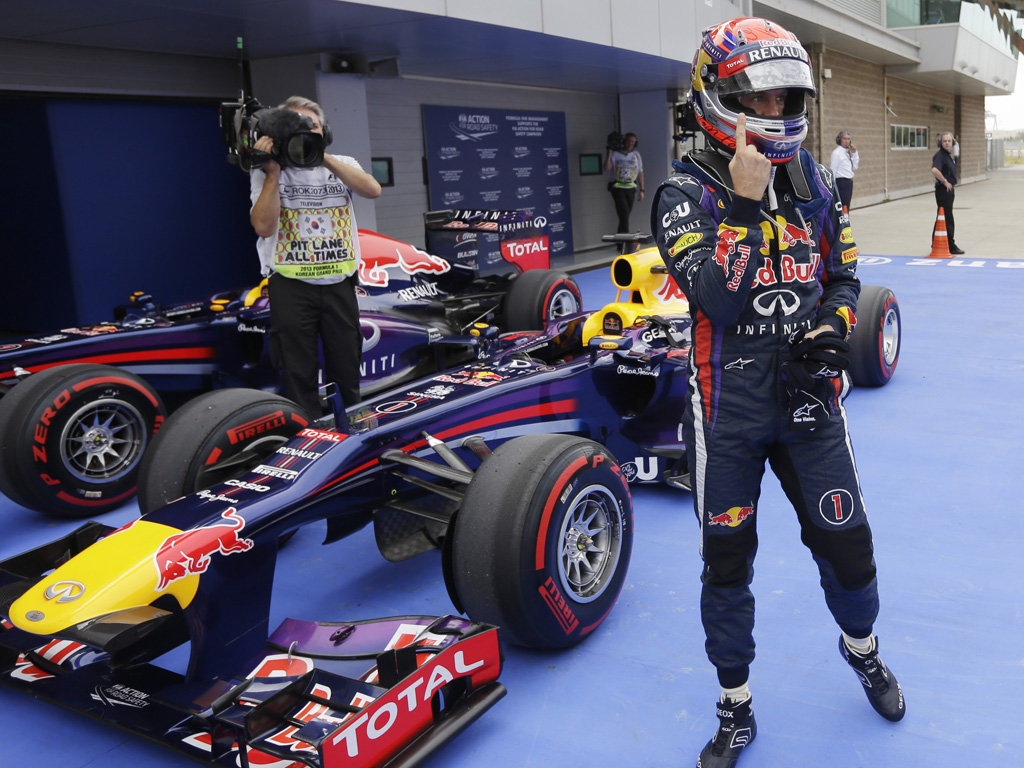 Red Bull:
Sebastian Vettel: “It was a long race today, but it’s really great to win. The start was crucial, it’s always tricky here as you’re nervous about the long straight when you start from pole. Fortunately we had good traction off the line and I had a strong exit out of the first corner. We kept the lead and tried to control the race from there. I think Mercedes had more range than us today, but we were able to win which is great. It was a very strong performance from the whole team and I’m happy. We’re just focusing on continuing to take one step at a time and trying to get the best out of the car at every single race.”

Mark Webber: “The incident with Sutil was obviously the end of my race today. It was in Turn 3 on the restart, everyone bottles back up and I was looking for a big exit on the next straight to use some KERS on Daniel (Ricciardo) and the Williams. Then Sutil, I don’t know what happened, but obviously he hit me from the inside and that was that. There was quite a lot of damage at the back of the car and I hope it hasn’t gone towards the chassis – we will have to see before the next race. Before that I was very happy with how I drove and we’d got back to a very good position before I got the puncture. After the Pirelli tyre failure on Perez’ car, I was very lucky to miss the tread of the tyre that came off and then unbelievably I managed to get a puncture from going through the debris.”

Lotus F1:
Kimi Raikkonen: “Second place is ok and a good result for the team, but we’re here to win and having to fight your way to the front from a bad starting position is not ideal. Qualifying was pretty awful for me, but it’s difficult to say whether a better grid position would have made the difference. Sebastian was faster than us at the end; not massively, but a little bit for sure and his tyres were fresher too so I think it would have been tough to catch him in any case. We were closer to the Red Bull today than we have been in some races, but not close enough. People might say it was good luck with the safety car, but sometimes these things go with you and others they go against you. We made up some places even before that happened, and if we hadn’t had the speed then we wouldn’t have been in a position to take advantage. You could see at the end that we had more than enough pace to keep the others behind, so I think it’s deserved.”

Romain Grosjean: “It’s a fantastic result for the team. Of course, one step higher on the podium would have been better for me and two steps better would have been superb, but it didn’t quite work out that way. Our battle with Lewis [Hamilton] was good and our pace was great, but the two safety car periods hurt our attempts to battle for the win. After the restart I should have been in front of Kimi on the road, but it was my mistake which let him past. I went a bit wide in Turn 15 and got on the Astroturf – which is very slippery – and that let him get a run on me. Then there were yellow flags into Turn 3 so I couldn’t take the place back straight away. Of course, I was asking the team to let me past Kimi as I was on fresher tyres, but they left us to race which is our philosophy of fair play. You lose so much downforce in sectors two and three and obviously our cars are pretty close on performance so it’s pretty hard to pass, but we have to be very happy with a double podium.”

Sauber:
Nico Hulkenberg: “Today I drove one of the best races in my career so far. I have had cars in the mirrors before, but today there were a lot and it was a bit annoying. Lewis really put the pressure on at the end, especially in the last sector. I knew I needed to get out of turn one well. The car’s traction was very good today, so that kept me alive against Fernando and then Lewis later on. We were also very fast on the straight. I had a good start, although on the outside into turn one, which was a loss at first, but then I had a real good slip stream and was able to get past on the outside. A big thank you to the entire team for providing such an excellent car today.”

Esteban Gutierrez: “I had a very good start, then I arrived at turn three and saw what was going on. I tried to protect my position, my rears locked and that’s why I lost a couple of positions. To recover from that was quite a challenge. I had some good fights with Massa and Checo coming from the back. Of course, I wanted to score points today, but this is racing. It’s a great experience and will help me to improve my race craft. We had good pace today and are definitely able to fight in the top ten.”

Mercedes:
Lewis Hamilton: ” That was not a great day for us and it feels like we deserved more as a team. After Grosjean got ahead of me at the start, there was no way past and it seemed that we were losing out to other on traction cars all day. In my second stint, running the prime tyre, my right front was just destroyed all of a sudden. When that happens, you start losing temperature, understeering and locking up under braking, so it was really hard to maintain the pace in those laps. It was a really difficult part of the race but I had to get to a certain target lap before I made the final stop. After the Safety Car, we were just losing out in traction to the Sauber. Our car was really strong through the middle sector but not quick enough on the straights to stay ahead. It was a nice battle with Fernando but it’s hard to take when it’s only for P5 or P6. It was just not a good race for us today but we have the chance to bounce back in Suzuka.”

Nico Rosberg: “That was another very tough race for me. I couldn’t believe what happened with the wing: I was on course for a podium finish after overtaking Lewis and two seconds later, the front wing just broke. It was pretty scary because that could have been a dangerous situation but the engineers told me over the radio that it was under control and I could carry some speed back to the pits. It’s a shame because the car felt great today and I found a good balance and how to get the most out of the car, which I hadn’t managed until this point of the weekend. It’s been a real up and down season so far for me but it’s good that we have another race in a week’s time. Our car is very competitive and I had good pace compared to the cars on the podium. So I’m looking forward to the next races.”