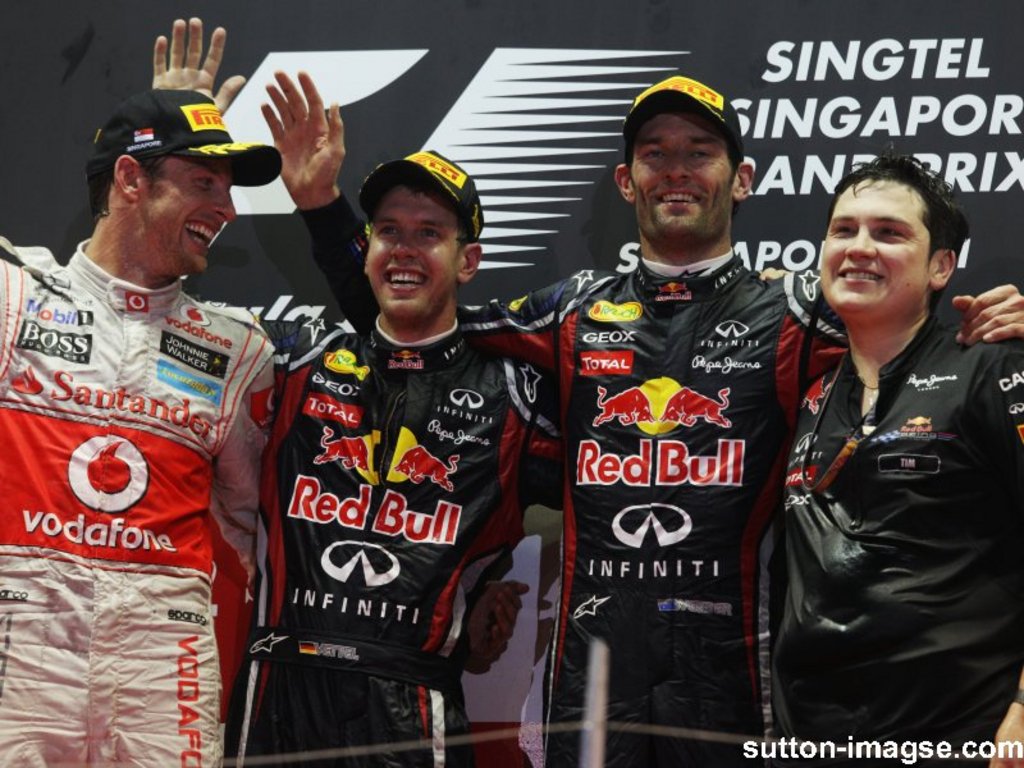 Red Bull:
Sebastian Vettel: “I am very, very pleased with the result today, the car was fantastic all the way through. When we needed to push, we could pull away quite easily, which helped us. When the safety car came out, it didn’t really fit to our plan as we had a gap of about thirty seconds with thirty laps to go, but nevertheless I had a very good restart. I was a bit lucky that there were some back markers between me and Jenson and I was able to get back into the rhythm straight away. I pulled out a gap and I was quite happy. All in all it is a fantastic result. I really love this track and I love the challenge here – it’s one of the longest races of the season, but the car was fantastic and engine-wise everything was great. Renault again did a very good job, so we were in a comfortable position for most of the race, which is pretty handy around here because it’s quite a challenge to put all the sectors together, not only in qualifying, but also in the race. I’m very pleased and for the Championship it looks like we have another chance at the next race.”

Mark Webber: “Unfortunately I’ve found myself having to come back through the field too often this season. I can’t make the starts I made last year at the moment. I need to work on those; we’ll look at them and definitely improve. I have to keep working harder because it’s quite frustrating and it’s quite risky to have to come back through and try to regain positions on the track, particularly when the DRS isn’t working. In the end I probably lost a position today out of that, JB put a good last stint together so it would have been good battle with him, even if he did have track position. Seb deserved the victory today and overall, if you come here and you get a podium, it’s not too bad. Of course you’d love a win, that’s what we all strive for, but this is a very challenging venue. The guys have done a great job all weekend, for me in particular – as it’s not the easiest track for me here. I want to thank all the guys – they’ve done a great job for me all weekend and Renault also – we have had 100% reliability, so a great job.”

McLaren:
Jenson Button: “I was being told throughout the race to look after the car and the tyres; the only time I was really able to push was in the last 12 laps, when I chased down Seb [Vettel] on the Supersoft tyre. I gave it everything – but, in the end, we didn’t quite have the pace to make up the gap. Still, I think we had the best possible strategy for both Saturday and Sunday, and I couldn’t realistically have asked for a better result this weekend. In fact, we didn’t make any mistakes this weekend and, as a team, I think we did the best possible job with the equipment we had. We need to improve a few things in our package, but I think Suzuka should suit us a little better [than Marina Bay]. I’ve had a run of podium finishes recently, so I’d really love to finish one step higher at the next race!”

Lewis Hamilton: “Congratulations to Seb on a great drive – he drove fantastically all weekend. And well done to Jenson, too – he showed what was possible from our package by really getting the maximum out of it. He nearly brought home the victory too – so I’m encouraged that we can continue to challenge for wins for the rest of the season. I had fun picking off cars after my penalty, but it was frustrating to once again be down the field when I felt we had a car that could have challenged up at the front. For me, this weekend was a bit of a missed opportunity. As always, though, I’ll put it behind me – I’m already looking forward to Suzuka!”

Ferrari:
Fernando Alonso: “Unfortunately, today it was impossible to finish on the podium. We were not fast enough and, even if we were third for some parts of the race, we knew that sooner or later we would be overtaken. Sure, if you nail the start and something unusual happens and you do everything perfectly and then some, the podium might come your way, but at the moment, the reality is that our car is third best in terms of performance. Then, as happened today, if the Safety Car wipes out the few seconds advantage we had put together over Webber and the backmarkers, who were maybe a bit distracted, create unexpected problems, then everything becomes more difficult. At the start, on the Supersofts, we had very high degradation, while on the Softs the situation got back to more or less normal compared to Red Bull and McLaren. We fought all weekend long and I’m pleased with the way the team worked, because they always did their very best and we got the most we could have done out of this race. We have five difficult races ahead of us, but our motivation does not change: at some point maybe we will be able to attack, while there will be other times when we have to defend, but either way, we will always do our best.”

Felipe Massa: “There’s no point in me hiding the disappointment and anger I feel at the end of a race that could have delivered a very different result. The damage following contact with Hamilton penalised me a lot because I lost so much time in the early stages when the traffic was still very heavy. After the race, I tried to talk to him to clear the air but he walked away without even answering: so I told him what I thought when we found ourselves in the interview area. On top of that, the Safety Car added to my troubles: I had changed tyres a few laps earlier and had fitted the Supersofts which definitely would not have got me to the end of the race, while other drivers were able to make the most of the race being neutralised to make their stop without losing too much time. In the end, first of all, I lost some time behind Barrichello and then I had to let Vettel by, which meant I was a lap down on him and had lost any chance of finishing seventh, given that Sutil and Rosberg in front of me were struggling with their tyres. I would really like to have a trouble free race at some point, something that I have not experienced recently, if you look at Monza for example. Today, a top six finish was definitely within reach.”

Force India:
Paul di Resta: “My first Singapore Grand Prix was a lot of fun and I’m very happy with the outcome. I don’t think the safety car really helped us because I still had a lot of life left in the supersoft tyres in the middle of the race, but it didn’t really hurt us either. After that it was a case of managing my pace to Rosberg, looking after the tyres and bringing the car home. I was in free air for the final part of the race, which helped, and the pace was strong. It’s probably my best race of the season, but it’s the result of all the hard work behind the scenes. We came here with an upgrade package that has allowed us to gain performance in the race, gain tyre