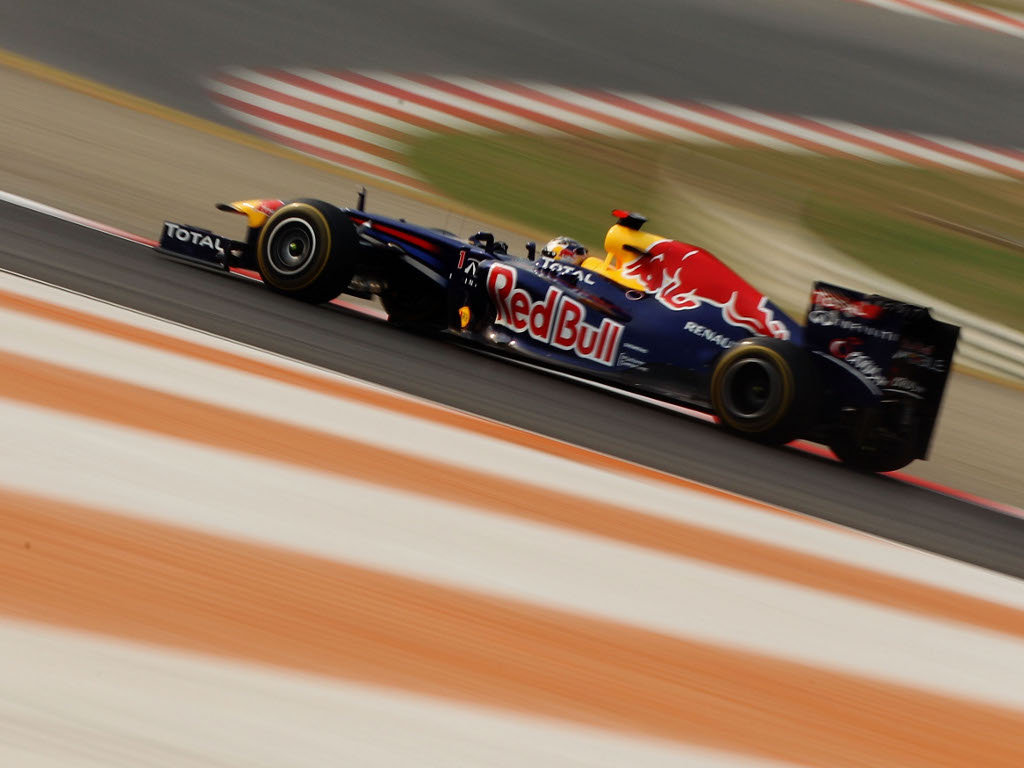 Red Bull:
Sebastian Vettel: “It was very good race for us and I enjoyed it. I had a bit of a fight with Jenson in the distance who was always around 4 seconds away, but strangely he kept closing in around the pit stops. I was pushing very hard into the box, but we seemed to lose a little bit there, which we need to understand. On the circuit it was crucial to manage the tyres and make sure we had enough left at the end, but it was a very smooth race. The car was very well balanced and it was a fantastic race today. Thanks to the whole team and to Renault, who have done an exceptional job so far this season. But I have mixed emotions today. I’m very proud to be the first winner of the Indian Grand Prix, but on the other hand we lost two of our mates recently. I didn’t know Dan Wheldon, but obviously he was a big name in motorsport. I got to know Marco Simoncelli this year and our thoughts are with their families at this time. We are ready to take certain risks, but obviously we pray that nothing happens;sometimes you get reminded and that’s the last thing we want to see. It’s a very impressive country here, very different to what we know in Europe, but very inspiring. If you keep your eyes and ears open, you can learn a lot from the way the people handle things here. It’s a big country with a lot of people, but they are happy and enjoy life, which is what it’s all about. At the end of your life, it’s friendships, emotions and thoughts that you take with you, rather than what’s in your bank account. So, even though people don’t have a lot here, they are a lot richer in many ways and we can learn from that. It’s been a great race, a great event and the circuit is fantastic, so thanks a lot to all the
people in India.”

Mark Webber: “We lost the podium in the middle of the race really. It’s pretty much the general story of this year; I just don’t have the pace at the end of the stints, so I run out of tyres and then lose strategy, it means I have to pit earlier and it makes life harder. In the end, I wasn’t quick enough. I had a reasonable pace at the start of the stints, but as they go on, we go back into the clutches of the other guys. We were struggling a little bit with the balance at the end of the stints. It was a good fight with Fernando, but the McLarens and Ferraris were pretty strong in the first sector, Jenson got me on the first lap on the back straight. I was quick against him in the first few laps, but after that, as soon as you fight you chew up the tyres. So that’s the way it goes, disappointing, but now we go to Abu Dhabi.”

McLaren:
Jenson Button: “In terms of team effort, we did everything right today – our car just wasn’t quite quick enough to actually win. I got a good start, made up places on the first lap and then settled down to keep Mark [Webber] behind me for five or six laps. Eventually, I think we ‘broke’ his rear tyres, which enabled me to establish a gap. Then I could set about Seb [Vettel] – but it was very difficult to close him down. At the final stop, it was a risk going to the harder tyre earlier than Seb, but we had to give it a go and it worked pretty well as I was able to close him down by a further three seconds. My car felt really good: before Seb could find his rhythm on the Prime, I was able to get the gap down to 2.8 seconds, but it wasn’t quite enough. Still, this was a very good result for us – and I think we delivered the maximum possible. I loved the whole experience this weekend. And I think every driver will be excited about coming back here because it’s such a phenomenal circuit; fast and flowing with a bit of everything. It gets a big tick from me. The Indian people have really welcomed us to their country; I’ve never seen so many people smiling before. And the crowd has been wonderful. I hope that Formula 1 grows in India in the future and that we get an even bigger crowd here next year.”

Lewis Hamilton: “The contact with Felipe [Massa] was just one of those things. I really didn’t feel like I was at fault – it was a racing incident. On the grid, just before the one minute’s silence, he and I were standing next to each other and I put my arm around him and told him: ‘Have a great race today.’ I’ve still got great respect for him. During the race, it felt like there was a vibration in the car through the right-handers: it felt like the floor was scraping on the ground, in fact. I was pushing as hard as I could, but couldn’t find the performance, so we’ll have to look into that. It’s been an eventful year, but there are more races ahead and I’ll try to score as many world championship points as possible in both of them. Jenson did a great job today, so clearly we were quick enough. I just need to try to pick up on that for the next race.”

Ferrari:
Fernando Alonso: “It’s nice to jump on the podium for India’s debut in Formula 1 and I’m pleased to have a new trophy to take home. However, today was a special day, full of contrasting emotions. In fact, the satisfaction at getting a podium finish cannot cancel out the sadness which has been with us for several days, because of the deaths of two of our colleagues, two special people – Dan Wheldon and Marco Simoncelli. After this race, second place in the Drivers’ championship is still possible, but it will be very difficult because McLaren is on great form at the moment, even if the gap is only 13 points. We are aware that on paper, we are behind the two Red Bulls and two McLarens: then, if something unusual happens, we can make it to the podium. Today, the team was fantastic, managing to fix a problem on the front wing which was only identified twenty minutes before the start. At the start, I did not get away particularly well and so Button was able to pass me. Then I tried to stay close to Webber and when he slowed down a bit, I closed right up and, staying out on track a few laps longer than him, I was able to get ahead of him. Being patient paid off. Now we head for Abu Dhabi, a race that is a bit unusual…Maybe I will go to the Ferrari Park to play golf to relax prior to the race and then, on Sunday night, I will try and bring home the only trophy not yet in my collection.”

Felipe Massa: “There’s not much to say at the end of a weekend like this. I am really unhappy that I was not able to finish a race in which I showed I had the pace to fight for the podium. As for the collision with Hamilton, I can only say I do not share the opinion of the Stewards who inflicted the punishment. I simply stayed on the ideal line, braking on the limit and staying on the part of the track that was rubbered in. What else could I do? It’s the umpteenth time that Hamilton runs into me this year and it seems it’s some sort of fatal attraction…In the past, I tried to