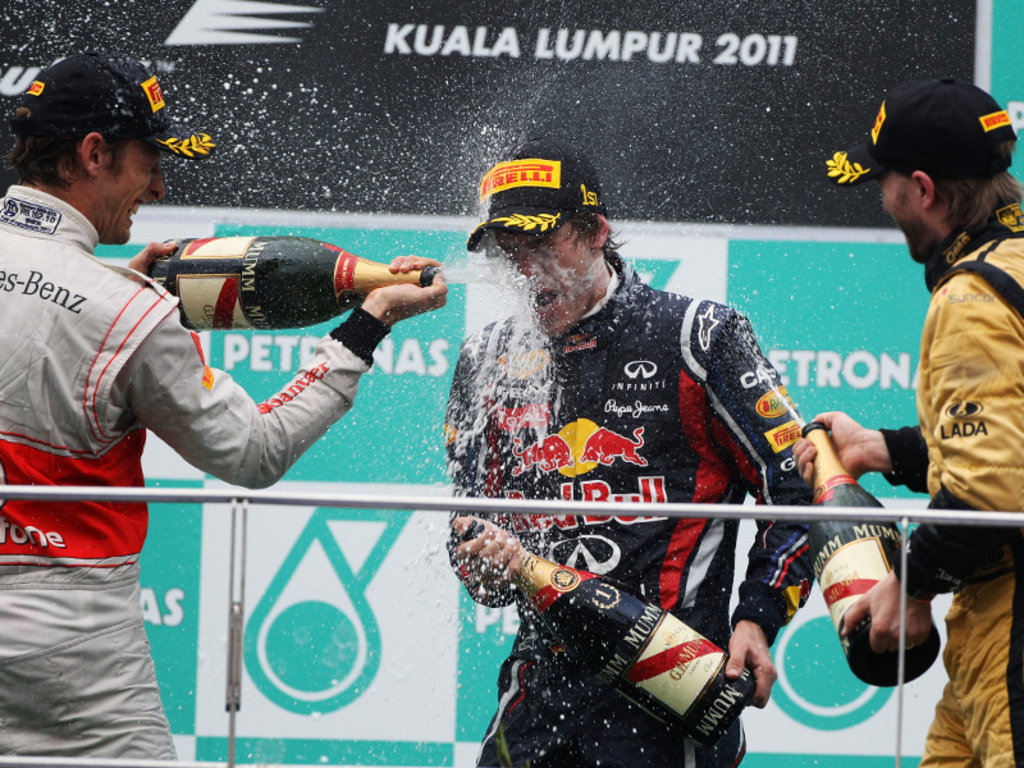 Red Bull:
Sebastian Vettel: “The start was crucial. I thought it was a very good start, but then I saw Lewis lining up behind me. I was surprised going into Turn one, as all of a sudden I saw something black in my mirrors – I knew it was a Lotus. For the first stint it was a good thing to happen, as I could pull away lap by lap. The entire race was quite different to what we saw two weeks ago – it was a lot closer and there were more pit stops due to the tyres. With the stops, you don’t want to be first in, as you want to do as few stops as possible, but also you don’t want someone else to go in, get an advantage with new tyres and undercut you. It wasn’t an easy race, but in the last section Lewis had a problem and was then behind Jenson. I’m very pleased with today’s result. I love what I do and don’t think I could be happier at this stage. It’s been close here, so we need to keep cool and keep pushing, but the guys know this is the way forward, so I’m not worried. But for today we will enjoy it and be very proud.”

Mark Webber: “It was a tough race today. It wasn’t a good start out of the box and we had a failure with the KERS, so I was out of position on the first lap. For the first three or four laps, I was trying to pass people, but they were coming back at me on the straights; it was tough to clear people when I didn’t have KERS. Anyway, I fought back with a good strategy and got some good points at least. It wasn’t our day today and I was disappointed not to get on the podium. It was close, but not close enough, But, it will come and now we go to Shanghai.”

McLaren:
Jenson Button: “This has been an extremely encouraging weekend for us. It’s very satisfying to come away with a good lot of world championship points – everyone in the team has done an amazing job and we should feel very proud of ourselves. Today’s race was all about looking after the tyres. On the way to the grid, I purposely took a lot of front wing out of the car, which was a mistake because I had massive understeer for the first stint, which also hurt the rear tyres. I just got the balance wrong. So at each pitstop, I dialled in more front wing and my pace kept getting better and better. At the end, the Prime tyre was really working for me. I knew Lewis had a problem in one of his pitstops and that I would be able to come out in front of him, but my pace was very good anyway. It was a great afternoon. In the closing laps, the team told me to take it easy on the tyres, but I chased down Sebastian [Vettel] as much as I could all the same – still, it wasn’t quite enough. We should all feel very encouraged that we have a good, strong package. I still don’t think we’re getting the best from it yet – but I hope we will in China, and that Lewis and I will both have great races.”

Lewis Hamilton: “Today was just one of those days. It’s never satisfying to start second and finish seventh, but that’s racing. We just have to take it on the chin and move on from it. At the start, I was on the outside going into the first corner, I got squeezed and it was difficult to defend without risking hitting Jenson or Nick [Heidfeld]. Then, during the race, my tyres kept dropping off; we pitted earlier than was optimal, and ran out of tyres at the end. I’d hoped to make the end of the race on a set of used Primes, but they didn’t last so we had to pit right at the end of the race. There were a lot of factors that made this afternoon very difficult: the delay at the pitstop, being chased by a couple of cars when I was trying to look after my tyres, and being hit from behind by Fernando [Alonso]. I think he got a bit too close, and, when he pulled out, he just clipped me with his wing and broke my car’s rear floor. I don’t how much downforce that lost me. Today wasn’t the greatest of days, but I’m going to China aiming to win; I’m only looking forwards.”

Renault:
Nick Heidfeld: “I had a great start just like in Australia, and did not expect to make up so many positions. I moved up to P2, making up four places. After that I did my best to follow Sebastian (Vettel) but he was much quicker. Then, I noticed some drops of rain and my tyres were going off but I stayed out. I lost a couple of places at my first pit stop, but it’s clear we had really good pace and we were able to fight with the cars ahead. I got lucky with Fernando (Alonso) having a problem, but it was great fun fighting and getting ahead of Lewis (Hamilton). In the final few laps Mark (Webber) was close behind me but we had the pace to stay ahead. It’s another great result for Lotus Renault GP and it’s clear the team has taken a big step forward this year.”

Vitaly Petrov: “First of all I am happy for the team as we got another podium, so we can consider this a great start to the season for us. It was a strong performance by the team in an unusual race. I made a small mistake which shouldn’t have had the consequences it had. I went wide and the car took off on the curb, landing hard. Both cars should have been in the points today, but the good news is that we clearly have the pace needed to compete this season.”

Ferrari:
Felipe Massa: “We definitely have to improve the car, but it’s equally true that our race pace is very different to our performance in qualifying. That’s a positive, but we know that grid position is nevertheless very important, so we have to move forward on this front. As for my race, it was a shame to have lost valuable seconds at my first pit stop: but for that problem, I could have fought my way to a podium place. With the soft tyres my pace was very good, less so on the hards, to such an extent that Webber, who in addition had made one more stop, managed to pass me.”

Fernando Alonso: “I am happy with this race: not with the result but because we were finally competitive, capable of fighting wheel to wheel for a place on the podium. This is further motivation for the forthcoming race in China. We were not lucky: if the moveable rear wing had worked all the time, I could easily have passed Hamilton down the straight, but instead we had to fight hard. He defended very well and, unfortunately, we touched: that broke my wing and I had to come back into the pits to change it, thus losing any chance of getting to the podium. These things happen: today went badly for me, but another time we will have better luck. Here, the car seemed capable of managing the tyres really well which meant I could fight with the others. With the package we have today, we cannot fight for the win, but I hope that changes soon. In Shanghai, we realise we can expect another difficult weekend. We will have something new, but we don’t know how much progress it will see us make. Everyone knows