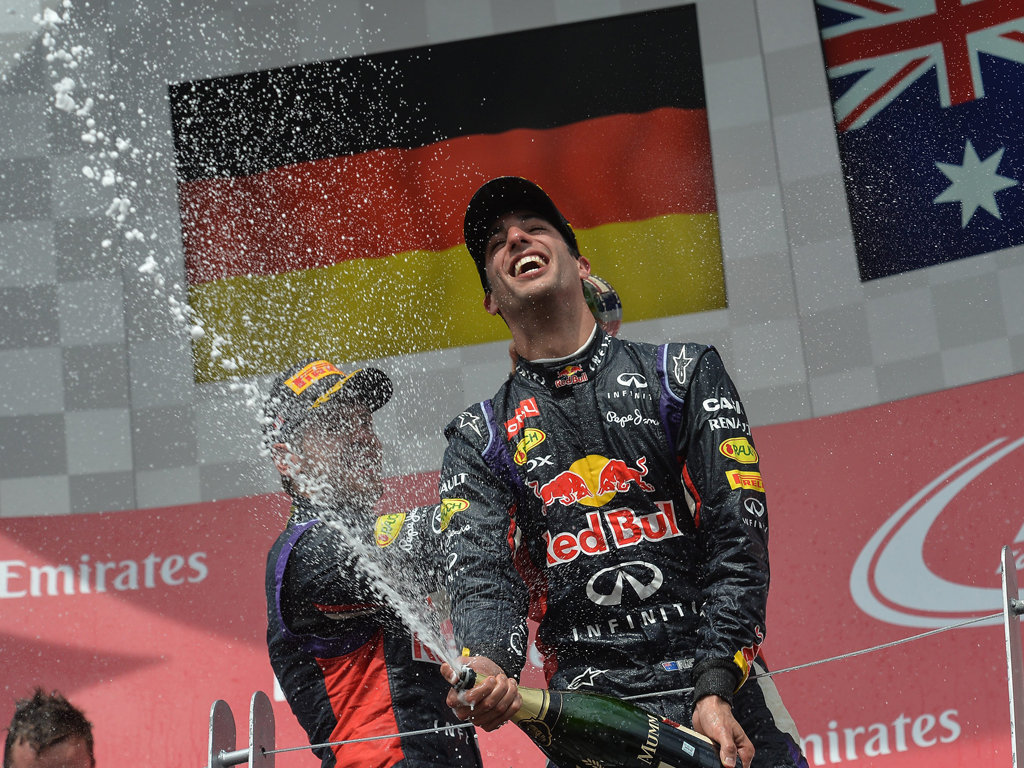 Daniel Ricciardo won the first race of his Formula 1 career in Montreal on Sunday, joined on the podium by Nico Rosberg and Sebastian Vettel…

Red Bull:
Daniel Ricciardo: “I’m a grand prix winner! I think it still seems a bit surreal to be honest, just because it all happened so quickly at the end. I was third for a while and then it all happened in a really exciting fashion. Once I got past Perez I knew I just had to drive clean and get in Rosberg’s DRS zone and, from then on, it was just awesome. Finishing under the safety car made it a bit weird, but I wanted to make sure the two drivers who were in the accident were okay before I started celebrating. We achieved a great result today with first and third – so let’s enjoy it – but we will still have some work to do also. This will motivate the guys to work even harder and find even more, so I’m sure it will keep coming even better for us at the next few races.”

Sebastian Vettel: “Congratulations to Daniel for his first win, which is very, very special, so I’m happy for him and happy for the team, especially after such a horrible winter. It’s nice to be able to finally break through to get a win this year and capitalise on Mercedes having a problem. I think we could have taken more risk with the strategy today – but it’s hard to know exactly what was going on around me when I’m not sitting on the pit wall. We have developed the car a lot this year, so we are going in the right direction, but we need to develop it even more for the straights, so there is still a lot of work ahead of us. We are here to keep pushing and to keep doing our best.”

Mercedes:
Nico Rosberg: “That was a big battle all the way through today! I had a tough start but I was able to defend in the first few corners and fight against Lewis. The race went smoothly for a while then both cars suddenly lost the MGU-K system and a lot of power which was really tough. Then I lost some time in the second pit stop which let Lewis jump me and I was struggling to cool the rear brakes down so it was all happening. Towards the end of the race, I tried to defend against Sergio which was fine but Daniel was too fast on the straights with much more power than I had available and he was able to get past. With so much going on, I had to ask my engineer where I finished at the end as I thought I was probably about fifth or sixth. I was so happy to hear that I was in P2! They are important points for me in the championship, so it was a tough but ultimately good day. Congratulations to Daniel for his first Formula One win.”

Lewis Hamilton: “I did the best that I could out there today and felt like I was having a strong race but unfortunately it just wasn’t our day. Montreal has been a good track for me so to come here and not finish is disappointing but there are plenty more races ahead of us this season so let’s hope for better fortune. There was nothing I could do about our issues really. We were managing the loss of power but as soon as I finally made the jump on Nico in the second pit stop, my brakes failed going into turn 10. It’s great for the team that Nico was able to hold on and get second place today but it’s tough for me. That’s two DNFs now this season and now I have to try and recover the points gap again. But these are learning experiences: we’ll learn as a team and get stronger. Congratulations to Daniel today. It’s awesome for him to get his first win and I know this will be a really special day for him.”

McLaren:
Jenson Button: “What a fantastic race! Big congratulations to Daniel – I’m a big fan of his, he’s a great guy, and he’s obviously got the skills. Your first grand prix victory is always very special, so very well done to him. The opening stint on the Option tyre was tough-going for me, so I decided to jump off it quite early and move to the Prime. But then I just kept coming up on traffic – there were cars everywhere: if you were racing against a single car, it was easier to get past, but if you were in a bunch, it was tough because lots of drivers were able to use the DRS. Still, I fought my way through at the end. I had a little dice with Fernando and Nico [Hulkenberg] – Fernando almost hit Nico at the hairpin, and had to dive down the inside. Then they both ran wide and I got down the inside of both of them. On the final lap, you never want to see an accident like Felipe and Checo’s – but, fortunately, they both got out of their cars okay, which was good. We come out of this weekend knowing that there’s a better overall feel to our car – it’s encouraging that we’re making progress. In a straightforward race, I wouldn’t have finished fourth, but we did a good job today and ought to be happy. These points are helpful, and they’ll spur us on to do another good job in Austria.”

Kevin Magnussen: “Before the race, I told myself that I’d be happy if I could score some points this afternoon. Getting both cars home in the top 10 was great for the team, but we know there’s still work to do to catch up with the teams ahead of us in the championship. Everyone is pushing so hard at the moment, so we just have to try and push that little bit harder. At the moment, I think we’re finding our way – there are a lot of good things happening back at MTC – and the whole team is working flat-out, doing a really great job. This was a bit of a challenging and frustrating race for me. It’s tough when you have to focus on looking after the tyres – I was racing Vergne for a long time at the end of the race, but I just didn’t have the pace to get past him. Still, I think we can be encouraged – we have some positive steps in the pipeline, but it’s still relatively tough-going for us at the moment. We just need to be patient and things will start to come our way.”

Force India:
Nico Hulkenberg: “It has been a very busy race for me today, so to come away with ten points and a fifth place is a good result. I gained some positions at the end due to the crash between Sergio and Massa but lost one to Jenson [Button] when I was in a battle with Alonso, but we were always going to finish in the points regardless. The safety car at the start didn’t help me as it allowed those on supersoft tyres to stretch their stints. Being on a different strategy from everyone else meant I always had someone pushing close behind me: it was fun, but also very challenging, especially towards the end of the race as I had quite a long stint on the supersoft tyres. Stopping only once I had a bigger challenge managing the tyres compared to the two-stoppers, but I think we got the right reward for it. I think it was the fastest strategy for us today and to be the only two cars to manage a one-stopper is definitely a positive.”

Sergio Perez: “On the final lap I was defending my position going into turn one when I suddenly got hit from behind. It was a big impact, but I am okay. I’m really sad for the team because we had an amazing race today and the one-stop strategy was working perfectly. It was not easy in the final laps and I was pushing hard to try and get ahead of Nico [Rosberg] for the lead. Daniel [Ricciardo] managed to get ahead of me when I had an electrical issue with my car, but I managed to reset the system for the final couple of laps. The podium was possible today and I’m just very disappointed for the points we have lost.”