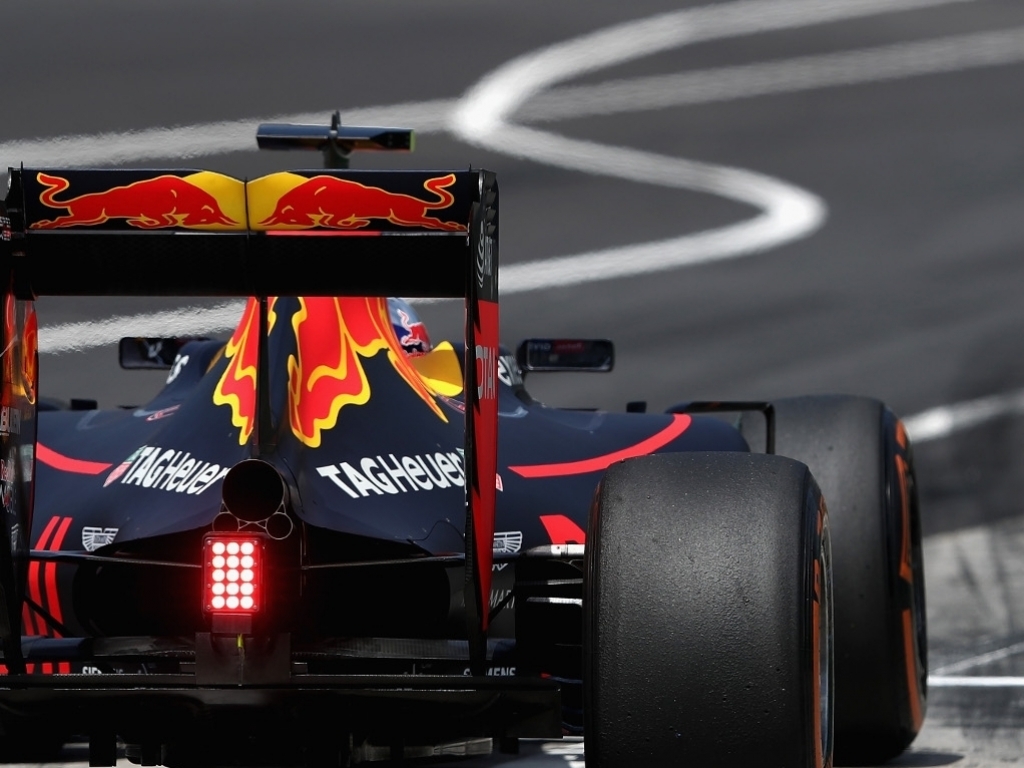 Red Bull:
Daniel Ricciardo: “What a day, I’m feeling a bit emotional and overwhelmed! It’s been a long time between drinks! A couple of weeks ago I said we’d win a race this year but to be honest I didn’t expect a win to come at this circuit. This is probably the sweatiest race to win and do a shoey, but for me it’s not so bad, I felt a bit sorry for the others though having to drink from my shoe, but the crowd was encouraging me! We had an opportunity today that we needed to capitalise on and I was determined to not let it go. We had a good battle with Max, he is a hard racer and we have that in common. We fought hard and aggressive but I think we showed we can push to the limit but still keep it on the track. We had a fair and clean fight and I think we both enjoyed it. My tyres were a little more tired than his but I was going to hold him off as long as I could. When the Virtual Safety Car came out and we both came into the pits for new tyres, that made me a little more comfortable for the last stint. This year has been an awesome year of progression for the team. We started the year a step higher from last year and kept going and getting better, and it really is amazing to win at this circuit. I want to thank the team for making this all possible and I’m very grateful for today. After Monaco I had a lot of mixed emotions and it was a hard one to take but I felt as a team we came through that stronger and better. I want to thank my parents and my sister as well for the support they gave me growing up. I also want to dedicate the win to Jules (Bianchi), I have been waiting for a victory to dedicate to him. My life definitely changed since that incident and I am extremely grateful and appreciative of everything I’ve got.”

Max Verstappen: “Having both drivers on the top two steps of the podium is a fantastic result for the team. I was really pleased about my start, finally it worked well again and put me right up there into turn one. I was then compromised due to Sebastian’s move, I had to avoid his collision with Nico which meant I lost a few places. The time I lost ultimately cost me at the end of the race along with a few unfortunate Virtual Safety Cars, but that is racing. Once I had the hard compound on I was catching guys ahead. The battle with Daniel during the race was great and really good fun. We have a lot of respect for each other so you can see we gave plenty of space but were still able to push hard. I got close to being in the DRS activation zone but my rubber was slightly older and overheating so I just couldn’t get within range and attack. The team told us we were free to race as long as we kept it clean, which we did. It is really nice to hear that from the radio. I think we had the race pace and speed to win today but we have to be very happy to settle for a perfect one-two for the team.”

Mercedes:
Nico Rosberg: “I came here with the will to win and that didn’t work out, so I can’t say that I am happy. After the first corner, it was looking pretty dark. I thought my race was over and never thought I’d be able to continue. It felt like an uncontrolled four-time World Champion torpedo had hit me! I reported to the pits that it was a pretty hard hit. I was fortunate to be able to fight through the field. But I got the knife between my teeth and went for it. I fought my way through, with some great battles along the way which I really enjoyed, and was pleased to make it back up to the podium. To be honest, I can’t believe that I’ve just been standing up there from last! After the incident with Kimi I was surprised that I got penalized. I had to give it a go at some point and I saw the opportunity, so I went for it. You need to be creative and wherever a chance comes, take it. I thought it was an aggressive move but still okay, to be honest. That’s what we race for! But I accept the decision and luckily it didn’t have an influence on the result, as we had a better pace than Ferrari. I had to give it everything at the end to eke out that ten second gap but at the same time save the engine, as after Lewis’ problem we were a bit hesitant to run it flat out to the end. It must have been a tough day for Lewis. I know how hard these moments are as I also went through a couple of them myself in my career, like in Abu Dhabi in 2014. It feels horrible and I’m sure he will come back strong, he is a fighter. But that brings me back to the approach of just taking things on a race-by-race basis. You just never know what’s going to happen next. I’m not going to start thinking any differently. The next race is Suzuka, where I’ll get back in the car and try to win again.”

Lewis Hamilton: “Max (Verstappen) was in my pit window so I was just trying to push him out of it. I think I’d done that, almost. But then, on the straight, I just lost power all of a sudden. You could hear something blew and I obviously had to stop. Honestly, you’ve got to understand it from my point of view. On one side, we’ve had the most incredible success these past two years, for which I’m so grateful. These guys work so hard and we’re all feeling the pain right now. When you get out of the car – that feeling you have after leading the race and then your car fails – it’s pretty hard to say positive things at the time. As I said in the TV interviews, Mercedes have built 43 engines or however many it might be with the extra three I’ve had, and I have happen to have most of, if not all of, the failures. So, that is definitely tough to take. But I have 100% confidence in these guys. It’s my fourth year with them now and the guys in the garage and back at the factories – I have 100% faith in them. I love it here and without them I would not have won these two Championships. While the struggle is real right now and has been all year, I honestly feel that it’s a test of my will, my spirit and who I am as a person to get back in and keep fighting it head on. It’s not how you fall, it’s how you get back up. That applies not just to me but to the guys as well. I saw tears in the eyes of my mechanics so I know that we all bear the pain. But, as I said, it’s how we re-group. We have to keep in mind what we’ve already built. While in the short term it doesn’t look good and for the long-term this year it might not be so good, there are still lots of positives. There’s still five races to go and if I can perform the way I performed this weekend there’s still everything to play for. We will learn. The guys will take the engine back and they’ll understand what happened. Every time we’ve had engine issues they’ve gone away and found out why. It puts us potentially in a better position to make sure it doesn’t happen next year. All I can do is what I’ve done this weekend. Come correct, be as focused as I can possibly be, put in this kind of performance and pray that the car holds together. I still have faith and hope. That’s a powerful thing. It feels a little bit like the man above, or a higher power, is intervening a little bit. But I feel like I’ve been blessed with the opportunity firstly to be here with so many great people around me, in this great team, to have won these last two Championships with lots and lots of victories and records that I’m breaking time and time again. Whilst it does not feel great right now, I have to be grateful for all of that. If at the end of the year the higher powers don’t want me to be Champion after everything I’ve given towards it, I will have to accept that. As long as I end the year knowing that I’ve given it everything, done everything I could possibly do and that we’ve done everything we could possibly do, that’s all you can ask for. Don’t forget that I’m World Champion. I’ll be okay.”

Ferrari:
Kimi Raikkonen: “Fourth position is not the result we wanted, but today unfortunately we couldn’t get more. Overall the car was not too bad and the handling was quite ok, but the pure lap time was not there. We were missing speed and we never had the chance to challenge the cars in front . When Rosberg passed me I suddenly had to turn right to avoid him: I knew he was going to hit me and we both would have probably been out: my rear floor was damaged because of that and Nico got penalized. After that I did my best to keep the ten seconds gap to him, but unfortunately it was not enough to get a better result. Obviously we want to be higher up, but now we have to take what we get. We’ll try to improve and push forward to make the car faster and be able to challenge the others.”

Sebastian Vettel: “We had a good start, then I was going side by side with Max. We were both battling for position into turn one. Nico in the front was turning in and he obviously decided to pick his line, which is absolutely fair and in his right. At that point with the speed I had I couldn’t slow down anymore and I was also pushed by Max to the right. I did my best under braking but I couldn’t avoid the impact. It was an unfortunate chain reaction which ruined my race and Nico’s one. I can’t do more than apologize to Nico, because the accident had nothing to do with him being in front. I think it was different to the case in Spa with Max and Kimi, as Max and I were trying to fight for turn 1, and Nico was trying to do a different thing ahead. I don’t have to comment on what Max said afterwards.”