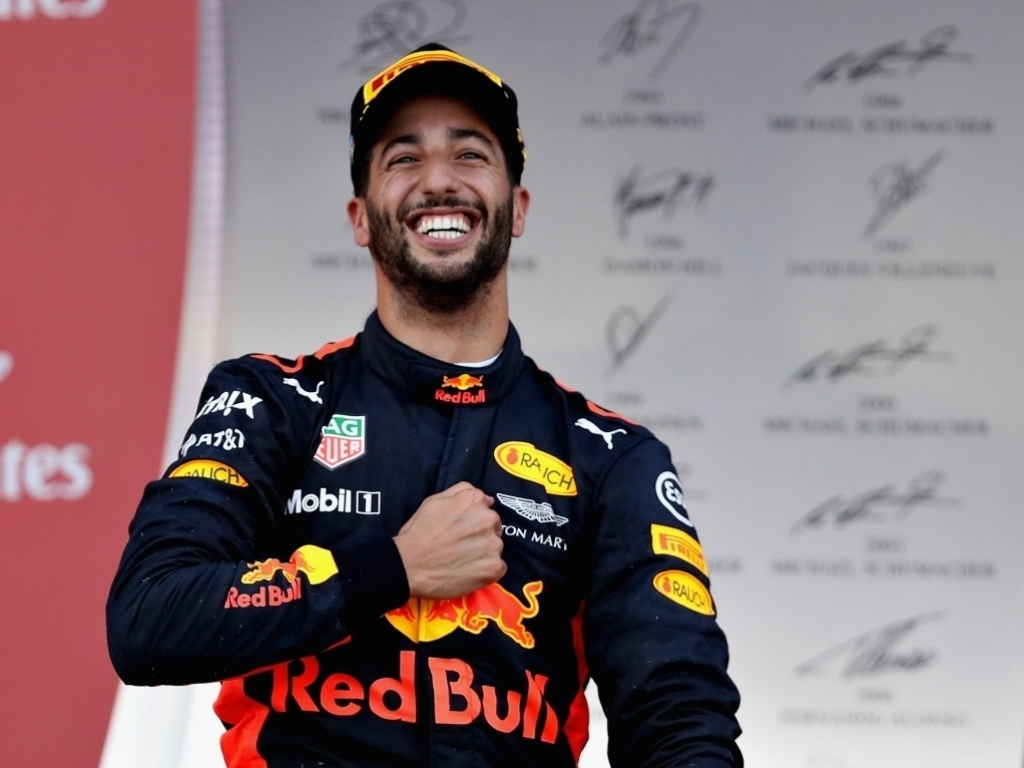 Daniel Ricciardo: “I have never really had a boring win and today was certainly not that. After all the chaos and the red flag I felt that a podium was in reach but then once Lewis had to pit and Seb had the penalty I knew the win was possible. I kind of said yesterday that after my qualifying mistake and starting in tenth place, today was going to be a race of no mistakes, capitalising on moments and opportunities and I felt like we did everything we could this afternoon. The odds of a podium or win got pushed even further back when we had to make an unscheduled pit stop early in the race and I think I was back in seventeenth place. Then things fell in to place quite nicely and on every re-start I was able to make up positions and make it happen. The last re-start was the most important and I think it was Stroll, Hulkenberg, Massa and me, all nearly four wide but I managed to get third and I think that was, in a way, the winning move. Once I saw the gap I was going to do everything I could to brake as late as possible and get that position. It was a real shame for Max today but it is great to get this victory for everyone in the team. I felt like this weekend was better for us overall and hopefully both of us can be on the podium together soon. What a day, it’s crazy and it’s slowly sinking in.”

Max Verstappen: “After what looked like a promising position at the beginning of the race I was gutted to be let down once again by a technical problem. After an action packed race we were confident we could have had at least a podium here in Baku, so I am very disappointed with this outcome.”

Valtteri Bottas: “Today was a crazy race, especially for me. I had a puncture on the first lap after the contact with Kimi on Lap 1. I was a lap down, then had to overtake the field under the Safety Car. The second Safety Car after that really helped me out and, step by step, I moved forward from there. My main goal today was to fight for the win but that went out of the window after the first lap. I was actually last at one point, but I got my head down, gave it absolutely everything and tried to get the absolute maximum out of every single corner. We didn’t quite manage to win but P2 from where we were is a great feeling. Importantly for the team, we scored more points in the fight with Ferrari and I got some good points for myself as well.”

Lewis Hamilton: “It’s difficult to swallow a result like this after a strong weekend. I drove my heart out today right to the line – I gave it everything. I know the team will be devastated about the issue with the headrest, but what we have to take away from this weekend is the great performance we have shown. We all feel that pain, but it’s on me to gather my thoughts and try and lead the team through this adversity. We’ll pull together and move forwards. I’m proud of my performance and I hope we can take the speed we’ve shown this weekend forward. I definitely didn’t brake-test Sebastian. I controlled the pace under the Safety Car and, just like with the other restarts, I slowed down in the same place on the entry to T15. At that point, it is up to me to control the pace and then I felt a bump from behind. But that wasn’t the issue for me – everybody saw clearly what happened after. All the young kids in other series look up to us, as champions, to set an example and that is not the behaviour you expect to see from a multiple champion. But we know that when times get tough, true colours show, and we have managed to apply some good pressure in the last weeks. Personally, I want to do my talking on the track and win this championship in the right way. More than ever after this weekend, I believe we can.”

Lance Stroll: “I’m just lost for words right now. It was such a hectic race and so much happened, but the team kept me cool on the radio, the pace was good, we took it to the end and stayed out of trouble. I can’t quite believe what’s just happened. We just lost out to Valtteri at the end there in one of the closest finishes of all time going side-by-side across the finish line. Coming into this weekend I never thought I would be standing on the podium. It’s an amazing feeling and, for me, a dream come true. However, what happened today was a team effort and I can’t thank everyone enough for making this happen. I am just so sorry that I could not celebrate with Felipe, as that would have been the icing on the cake. I am sure without his problems he would have been up there with me.”

Felipe Massa: “I’m so disappointed about the result today. The race was going perfectly. I was overtaking cars and I had really good pace. On the restart the car just started shaking on the straight and I didn’t have the speed, other cars were passing me so easily. I also couldn’t do the corners because it was shaking so badly. Today we had the opportunity to have both cars on the podium, and maybe even a victory. I do want to say a massive congratulations to Lance. I’m so happy for him getting his first ever podium in Formula One.”