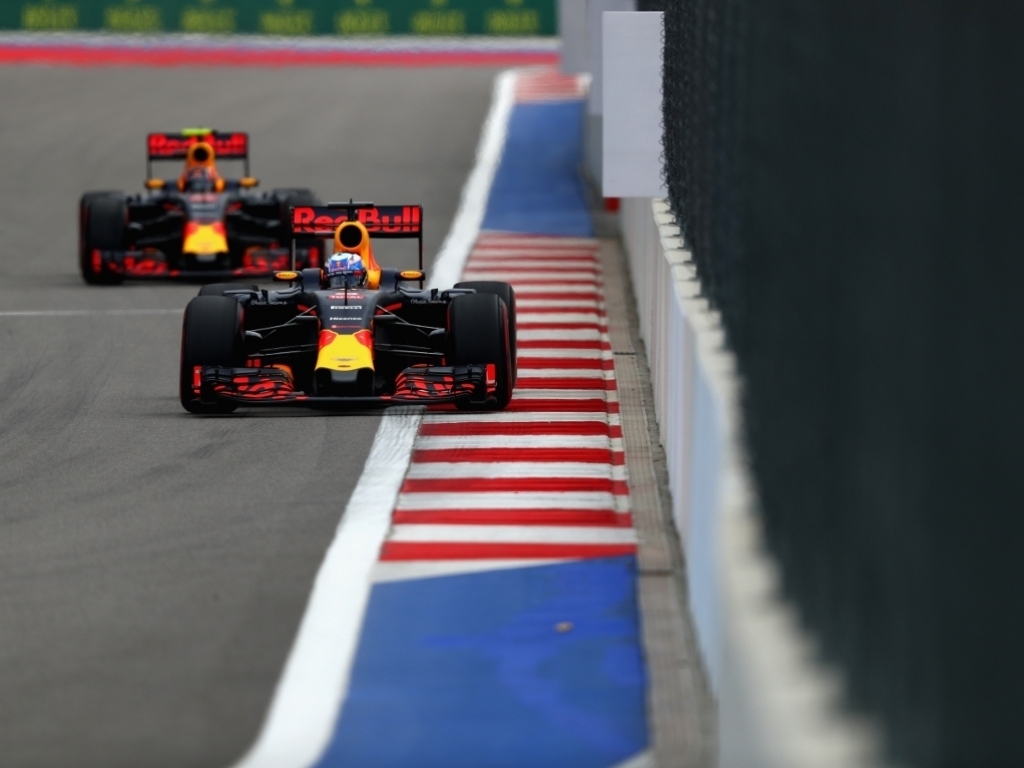 A disappointing Russian Grand Prix for Red Bull as both Daniil Kvyat and Daniel Ricciardo were involved in an incident with Sebastian Vettel.

Red Bull:
Daniel Ricciardo: “It’s frustrating and a shame to be out of the race more or less from the first lap onwards but I think these things happen with racing. After the start I felt a big hit. I saw Seb come into me but it looked like he got hit as well. We had a lot of damage and had to pit. We thought we’d try the mediums but that wasn’t really working. Unfortunately the damage was so much that we didn’t really learn anything from today’s race and we don’t know what our pace was. Barcelona and Monaco should be better, so we have a few races to be excited about.”

Daniil Kvyat: “There was a lot going on at the start and I didn’t expect to slow down as much, I locked the rear wheels and the car was a bit out of control which caused the contact with Sebastian. On Turn 3, I couldn’t see what was happening ahead, Sebastian seemed to slow down and unfortunately I didn’t have time to react and this caused the second contact. I’m sorry for Sebastian and also to the team as we gave away a lot of points today from both my side and Daniel’s. It doesn’t feel great, this is probably the messiest first lap of my career.”

Toro Rosso:
Carlos Sainz: “What an unfortunate race. Even though I did one of my best ever starts, a piece of another car got stuck in our side pod, which made me lose downforce during my first stint and also meant I had to stop too early for my pit-stop onto the Softs. This then compromised my second stint and I then also got a 10-second penalty…Now it’s time to reset, get ready for my home race – it always gives me an extra boost! – and come back stronger than ever.”

Max Verstappen: “Unfortunately I had to retire today after running in P6… It was looking like a great race up until then, as I was cruising around and I didn’t have any pressure from behind; I was just following the guys in front and our pace was strong. We could hold on to the tyres very well and I have to say I was quite relaxed, managing everything well and it was all looking so good… Who knows what could’ve happened! Of course it’s disappointing to have to stop the car, but this is a mechanical sport and these things happen. Now we just have to take the positives from the weekend and get ready for the first European race of the season in Spain in two weeks’ time.”

Sauber:
Marcus Ericsson: “It’s been a decent race for me. I had a difficult weekend as I have been struggling a lot to get the tyres to work on this special surface here. After the long-runs on Friday, we expected the car would behave better on high-fuel, which was the case today. For myself I can be satisfied with my race performance. Obviously, the result is not where we want to be. We are struggling with our pace at the moment, but we just need to focus even more to work on our performance.”

Felipe Nasr: “I had a good start and was able to gain some positions in the first laps of the race. Unfortunately, on my first stint with the supersoft tyres, I had a slow puncture on the left front tyre, which forced me to box on lap 12. We changed to the soft tyres on which I made it to the end. This early pit stop surely compromised my race. It is unfortunate, but I can also take some positives from the weekend as I felt comfortable in the car.”

Manor:
Pascal Wehrlein: “A disappointing result today. I got a good start and managed to avoid all the problems in the first couple of corners, then the first stint was quite good for me. I had a good fight with the Saubers but after the first pit stop they were in front of me. I tried to push hard to overtake one of them again but I couldn’t manage it and I destroyed my tyres behind them so I had to box again. At the second stop we had a problem with the left-rear which lost us a lot of time but by then I think 18th was the best we could hope for. Now we have to focus on heading to Europe and what we can do to improve. My thanks to the team so far for a good first few races and their hard work.”

Rio Haryanto: “Today I was unlucky and it’s very disappointing, especially after I made such a good start, probably my best of the season so far. I managed to gain a couple of places, however when I got to turn 2 there were lots of cars fighting and the Force India of Hulkenberg spinning but I had nowhere to go. There was contact on the side of the car and quite a bit of damage, which meant I had to stop the car. After a good couple of days it’s disappointing to finish the weekend in this way, but looking at the positives I feel we have been more competitive and I’m looking forward to continuing this at the next race in Barcelona.”