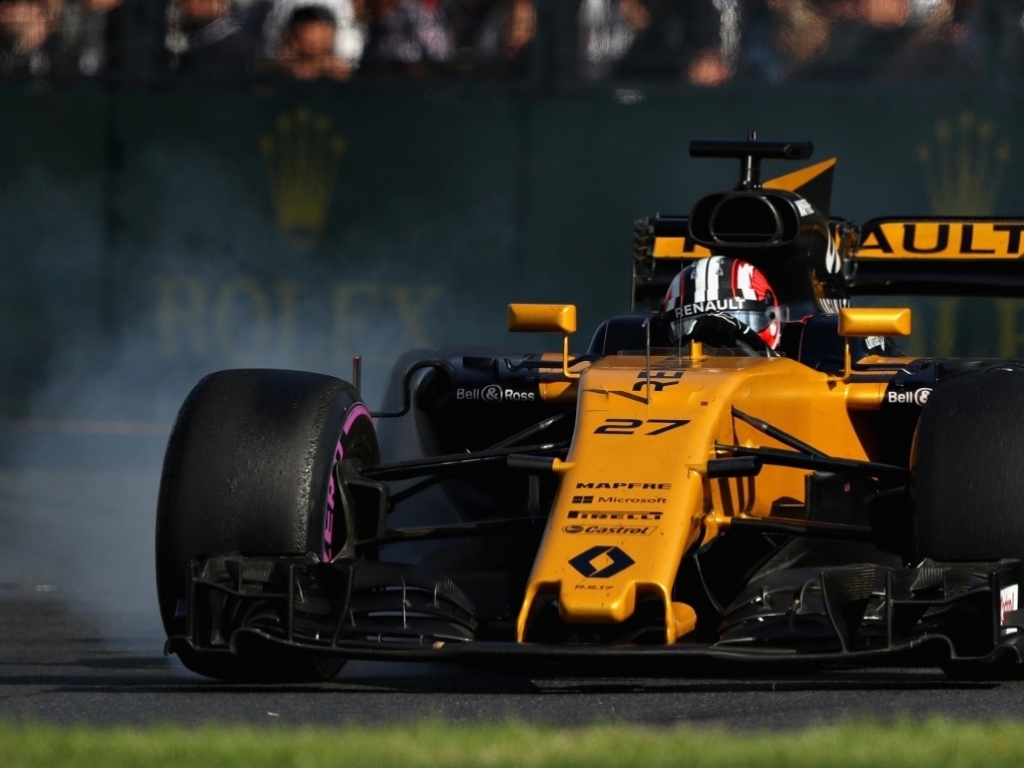 Fernando Alonso was running in the top 10 before being forced to retire, while there was a double DNF for Haas.

Nico Hulkenberg: “The conclusion from my first race with the team is that we are firmly in the midfield and we’re looking forward to continuing to improve. My first lap wasn’t great as I tried to get Kvyat on the outside of turn 13 but he squeezed me wide and I lost a position to Alonso. There was not much I could do about him, even though I was lot faster as I just couldn’t overtake. I had a very positive last stint on the ultrasoft tyres with the car getting better and better, although it wasn’t quite enough to gain another position. My battle with Ocon and Alonso was a lot of fun, I had massive double tow from them, so I gave it all with overtake mode and DRS. It was quite spectacular and must have looked pretty good from the outside too.”

Jolyon Palmer: “My race was going well. I made places at the start despite being on the hardest tyre, my pace was pretty reasonable and I could see Nico and Esteban ahead of me. Unfortunately, my brakes stuck on at turn 14. We hoped it was just a glitch, but it happened again so we had no alternative other than to retire. It’s not been the start I wanted to my season, so we’ll put it down to experience and look forward to China.”

Antonio Giovinazzi: “A very disappointing race for me. I did not have a good start, but then I was fighting hard in the first couple of corners on lap one. Unfortunately, in turn 3 I got hit from behind, which caused lots of damage on the right side as well as to the floor of the car. From that moment on, it was all about finishing the race. Later on, I had to stop the car on track due to a hydraulic failure caused by the incident on lap one.”

Marcus Ericsson: “A very disappointing race for me. I did not have a good start, but then I was fighting hard in the first couple of corners on lap one. Unfortunately, in turn 3 I got hit from behind, which caused lots of damage on the right side as well as to the floor of the car. From that moment on, it was all about finishing the race. Later on, I had to stop the car on track due to a hydraulic failure caused by the incident on lap one.”

Stoffel Vandoorne: “I had a very tricky race. At my pit-stop, I had to perform a full power-cycle of the car to reset it, which cost me time and position, and I also lost the dashboard readout for a while. Throughout the race, I was very busy on the steering wheel, making a lot of changes to the car’s settings while trying to bring the car home. Nevertheless, after the tests in Barcelona, we didn’t really expect to finish the race, so this is a little bit of a milestone today. We definitely don’t have enough pace to compete with the cars ahead of us, so we need an extra big push for China, in a fortnight’s time. We’ve had decent mileage all weekend; Fernando showed well in qualifying; and we finished the race, so there are positives to take away from this first weekend of the season. I think I probably deserve a slice of birthday cake this evening!”

Fernando Alonso: “In terms of driving, I probably had one of my very best races today. I was able to drive the car at my maximum; I felt confident, and I enjoyed driving the car throughout the race – I was able to push. With such little degradation from this year’s tyres, it’s enjoyable to be in the cockpit again. However, that enjoyment is less for us, because we are not fighting at the front. Our car is obviously not very competitive at the moment, so being able to keep the car in the points was a little surprising. At the end of the race, I had a problem that prevented me from finishing the race. It’s disappointing to see we’re not ready to fight at the front – we need to quickly make some further improvements.”

Kevin Magnussen: “I had contact at turn three. I had Ericsson on the outside and I understeered into the side of him, which was unfortunate. I lost my front wing and damaged the car a little bit. We changed the front wing and then I went for a long test session to feel the car and learn a bit more about it, which was good. It feels good and the car is fast. That’s the really positive thing from this weekend. The car is there. We just have to make it finish and score points.”

Romain Grosjean:“I suddenly lost a lot of power. I told the guys, then the next thing I knew I had to slow down the car. It’s a pretty disappointing result, but again, right now I’m hot and we’re all disappointed to lose a seventh-place position, but the car was there in qualifying in P6. The start wasn’t ideal, so we need to improve that. I felt I was faster than the Williams, so there’s huge potential in the car. I guess the key for us is to keep the momentum and get the consistency we didn’t have last year, where I’d be fifth in Bahrain then 19th in China. I really want to improve on that and get more consistency in terms of results. If we do that, then I’m sure there are going to be plenty of races where we can score good points. I’m feeling it right now, but tomorrow I’m going to wake up thinking, you know what, we’ve got a great car, so no matter what, we’re going to be there this year.”