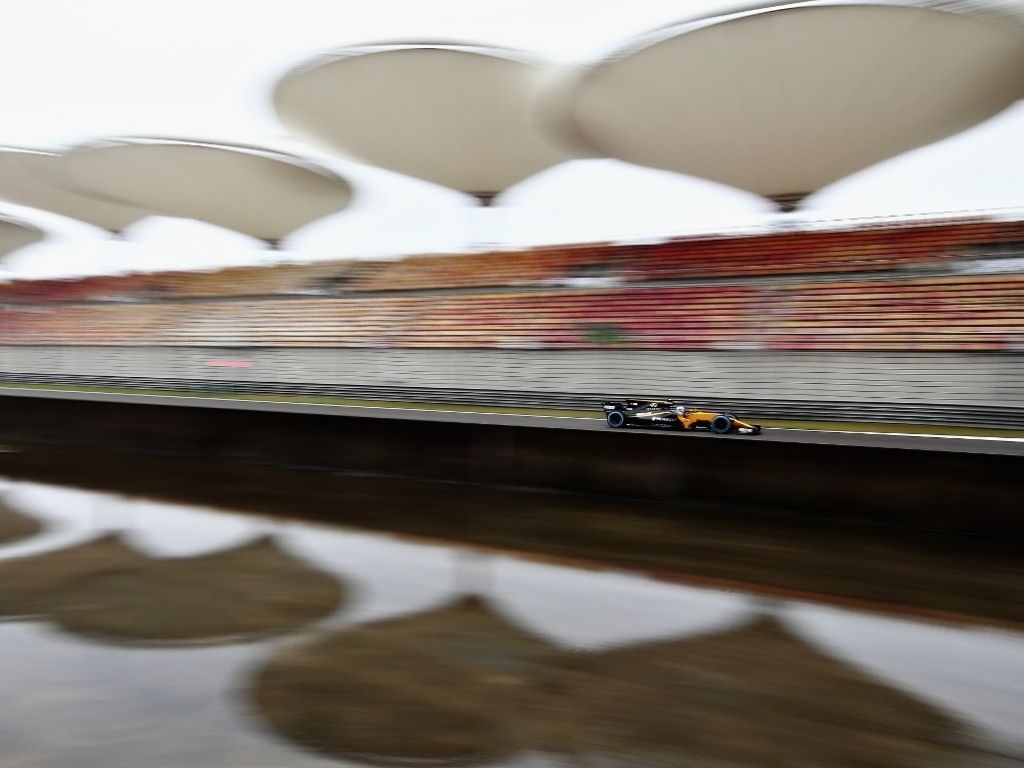 Lance Stroll’s race ended on the opening lap, while there was double DNF for the doomed McLaren.

Nico Hulkenberg: “We took a risk right at the end of the first lap and came in for slicks as the track was really dry everywhere apart from the main straight. As I exited the box though, Stroll crashed and the Virtual Safety Car came out, and in damp conditions if you can’t push, you lose all the tyre temperature. I lost all grip; it was like driving on ice and I spun a few times… From there it just went wrong, the VSC pretty much ruined our strategy and so the race. It’s a shame because I think it could have worked out very nicely for us today.”

Jolyon Palmer: “It was a difficult race. We made the right call to pit at the end of the formation lap but I hit a wet patch when racing a Toro Rosso, then the tyres lost temperature under the Virtual Safety Car, so it was a very difficult first stint. On the plus side, the car ran reliably and I have a race distance under my belt now. Now we reset and head to Bahrain with the objective of a much better weekend.”

Felipe Massa: “I’m really disappointed today as everything went wrong for us. I had too much wheelspin at the start, and then behind the safety car we had five slow laps on the dry tyres, so they were completely cold. I wasn’t able to drive in the proper way because it felt like I was driving on ice. That was the worst part; we lost so much time and so many positions. Then we tried to risk stopping before the others to see if we could pass people and keep up the pace, but I couldn’t. We need to carry on trying to do what we did in the first race in Australia and qualifying here. Now we will look forward and concentrate on Bahrain.”

Lance Stroll: “I was hit from the rear at Turn 10 and that was the end of my race. I was in front, knew the corner was mine and had to turn in eventually. It was just unfortunate as that was my race over. I got hit and then the car was broken, most likely with a puncture and damaged suspension. While today was difficult, we have some positives to take out of this weekend, as the qualifying was good even if the race was not what we wanted. But it is still early days and there are a lot more opportunities. I am now looking forward to Bahrain next weekend and that is what I am concentrating on now.”

Marcus Ericsson: “I had a good start as well as a decent first lap. During the virtual safety car phase we were changing to soft tyres, even though we knew that the track was partly dry as well as still wet. After that, it was quite difficult. The conditions were tricky as well as the asphalt temperatures being relatively low, which made it difficult to get the tyres to work. Overall, I struggled with the tyres during the whole race – I never really got them into the right working window. Now I look forward to Bahrain.”

Antonio Giovinazzi: “First of all, I want to apologize again to the team. They did a great job to get the car ready for the race. It was a shame that I crashed again today. A learning lesson – I just want to forget this weekend quickly.”

Fernando Alonso: “We started from P13 in very tricky conditions, and after a few laps we were running in sixth position. That was a big surprise and was thanks to an amazing couple of laps. I was hoping those tricky conditions would continue as other cars were spinning off here and there, and, as we said yesterday, we maximised our opportunities as we were overtaking ‘for free’ at some moments. But then, when the track started drying out, we started to lose a little bit of ground even though we were still able to hold onto P7 for some time. Today we proved once more how hungry we are to get a good result, but unfortunately we’re still not strong enough to finish the races. The lack of winter testing means we’re paying a big price now, but hopefully we can improve quickly. It’s a shame that neither Stoffel or I could not get to the end today, and especially painful because I was in the points, but all we can do is learn our lessons and be a little bit better in Bahrain, even though the forecast is of course for no rain…”

Stoffel Vandoorne: “It was a short race for me, but quite exciting at the beginning. Both Fernando and I got good starts, and were in the mix for the first few laps, although the positioning wasn’t great after the pit-stops, and then after that it was a bit more tricky, but our pace was actually quite promising. When we put the slicks on, we were actually quite competitive and I was able to push when I wanted to. The car feels very good in the corners – I felt very confident and I was closing the gap to the guys in front – but as soon as it started to get drier, we really noticed the difference in speed and it made it very difficult to overtake. With the straight-line speed we have, we can’t really compete with the others and it’s tough out there for us to make up ground. On lap 17 we lost power – I don’t really know exactly the reason – but I think it was a fuel problem. It’s a shame we couldn’t get to the finish today – the potential was there and the car felt quite competitive in the corners compared to the cars I was racing against. I felt the power drop and I could feel immediately we had very low power. It’s not ideal, and obviously I would have liked to go to the end. There’s not been many laps for me in China, but this is the situation we’re in at the moment. We knew that before coming here and hopefully next weekend in Bahrain it will be better. There are still positives we can take away: the chassis is coming along, and both Fernando and I are feeling very confident to push. I hope it will get better soon – it’s difficult to put a time-frame on it so we’ll have to wait and see. Bahrain is a very different kind of circuit from Shanghai, and we’ll do our best as usual.”