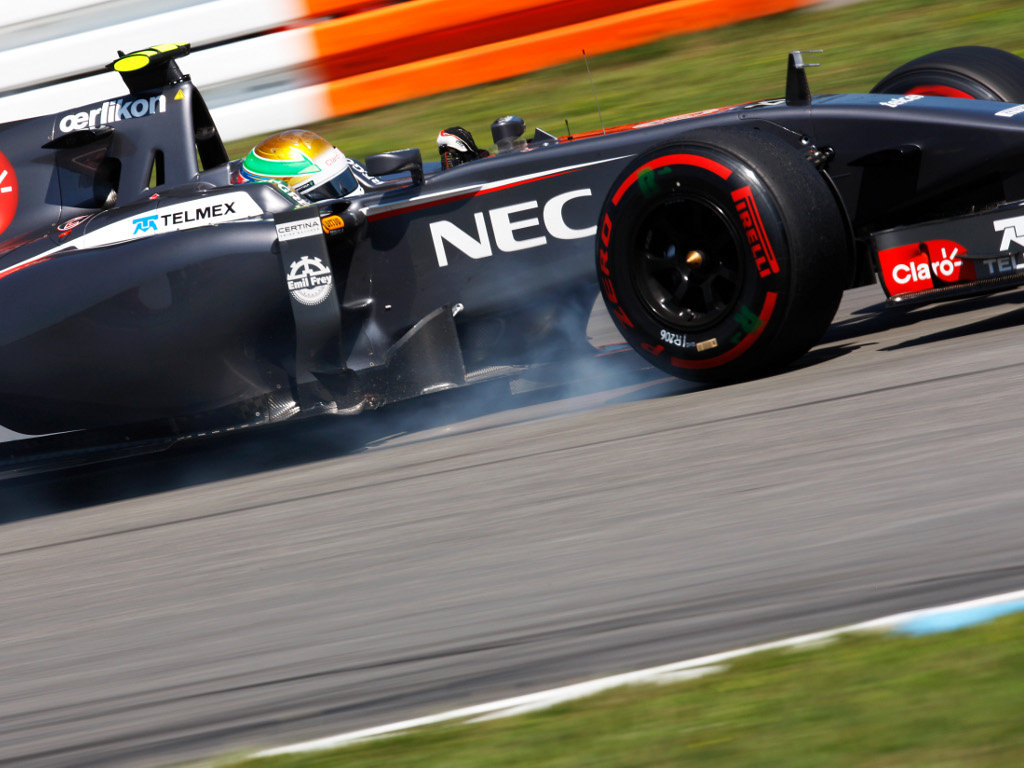 Sauber run of point-less races continued in Germany as they finished at the bottom of the timesheets, only ahead of Marussia and Caterham…

Sauber:
Esteban Gutierrez: “The whole team did a good job over the weekend. From Friday on we developed the car as best we could. However, 14th position is not satisfying. I was fighting the entire race from the beginning to the end, trying to gain positions and keeping cars behind me. At the moment we are missing the pace to be able to fight with the others in front of us. There was not much that we could do. We need to keep working and focusing on our performance so we can be more competitive in the next races”

Adrian Sutil: “It was an exciting race with good battles. I had a lot of fun and it was the first time I could keep up with some other drivers. It is positive as our car was more competitive this weekend. Suddenly, after my last pit stop, I lost power and when I entered the Motodrom I thought the engine would switch off. In the last corner I had a similar problem, then I spun and this time the engine did switch off. It is certainly frustrating, but at the moment we have to come to grips with it.”

Marussia:
Jules Bianchi: “I had an issue at the start and dropped to the back but I got back ahead of Kobayashi and Max in a few laps and I was happy for that. Then the race went pretty well for me. I could keep everyone behind me and I was quite a bit quicker than the cars behind, so the only factor was that we were not quick enough to catch the Saubers. As we know, this is something we have to work on. So, the race was how we expected really. The balance changed a little because of the different temperatures today but otherwise fine and a good team result with us retaining our championship position.”

Max Chilton: “I got a good start and managed to avoid the Turn 1 incident but after that my race was not so good. We changed the strategy to try to get ahead of Kobayashi but it didn’t work out for us. I was giving it everything but not getting enough back from the car, so we have a few things to work on before Hungary. We seem to have lost a little bit everywhere with the changes we have made to the car prior to this race, so it will be a short but busy week ahead to try to regain that ground.”

Caterham:
Kamui Kobayashi: “At the start I managed to avoid Bianchi who was slow off the line but I was behind Chilton going into turn one. After the safety car went back in Bianchi managed to get ahead so I focused on pushing to the first stop where really good work from the pitstop crew helped me jump Chilton, and I held that place comfortably up to the second stop on lap 32.

“The car balance was ok – there was a bit of understeer, less than on the supersofts I’d started on, but I didn’t have the outright pace to catch the cars ahead. When we boxed again the guys did another great stop and helped put some more time between Chilton and me so I didn’t have to push the second set of softs too hard on the first few laps of the third stint.

“I pulled away from Chilton and then when Sutil span we boxed for the last time to finish the race on another set of supersofts. 16th was about as much as we could have done today – we didn’t quite have the performance to catch Bianchi so now it’s on to Hungary next week for the last race before the August break.”

Marcus Ericsson: “I started from the pitlane so it was always going to be a struggle today. Obviously the safety car on lap one helped but I had to serve the ten second stop / go we’d incurred for breaking parc ferm