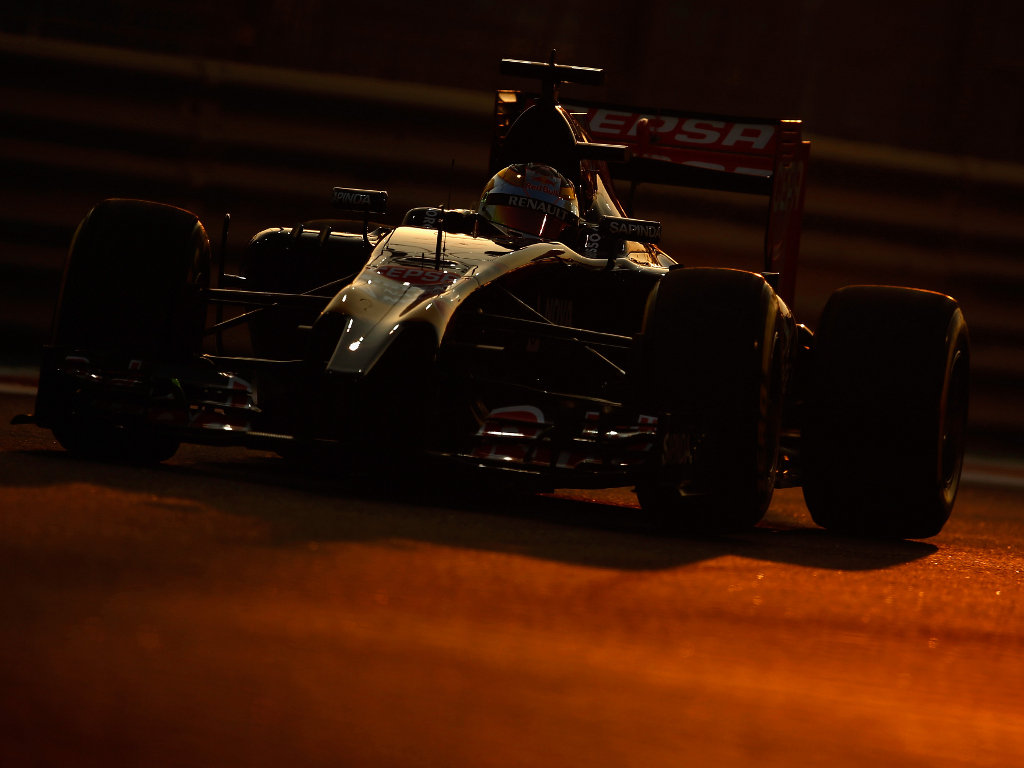 Toro Rosso, Lotus, Sauber and Caterham all finished their 2014 season outside the points in Abu Dhabi…

Toro Rosso:
Jean-Eric Vergne: “”Today I have absolutely given my maximum to catch the ones in front of me but the pace was just not good enough. It’s a shame as our starting position made us think we could have finished in the top ten. We really wanted to score some good points for the final race of the season and we could not achieve our goal. On the positive side, we are still 7th in the Constructors Championship and this is very important for the team. I want to thank everybody, for yet another season together.”

Daniil Kvyat: “This is one of those races, in which we were just not able to show our full potential. We were expecting a much better final race but an engine related problem forced me to retire in the early stages. This was unfortunate, because speed and pace were quite good until then. We were fighting with Ferraris and Button and I think we could have finished somewhere around him. Anyway, I have to thank my team for everything they have done for me this year, helping me to grow as a driver and be ready for next year. This has been massively important for me. Looking back to this season, it’s a shame that in many occasions we could not show our real potential. I think we would have deserved much better results, but very often we have just been unlucky. Now I am looking forward to this new challenge with Infiniti Red Bull Racing.”

Lotus F1:
Romain Grosjean: “We did the best we could today. My race wasn’t that eventful and unfortunately it came to an early end for Pastor, so I think that we are all glad that the season is now over. We thought about doing a three stop strategy early in the race but then we swapped back to two stops. I’m already looking forward to being in the simulator to test the E23. We have a new Power Unit and aerodynamically next year’s car is looking like a great step forward. Now it’s time to take a break, recharge our batteries and look forward to 2015.”

Pastor Maldonado: “That was a surprising race for me. Our race pace was actually pretty good and I was able to fight with the Ferraris as well as enjoy the feel from the car. I was able to push and the car worked well on both tyre compounds. Unfortunately, my race had to end early. The flames showed the engine wasn’t working too well which also mean it was getting quite hot in the car! It’s a shame to finish a season like we did, but I know we have a lot of potential for 2015, so I am really looking forward to surprising some people when we return.”

Sauber:
Esteban Gutierrez: “A race during which I fought from the beginning to the end. We managed to keep our planned two-stop-strategy, which was quite an aggressive one. On my last stint I had to drive as many laps as possible on this set of tyres, which worked out for us. I was pushing every lap, but at the same time I had to manage the tyres. I want to thank every team member; it was a pleasure to have worked with the Sauber F1 Team. I wish everyone all the best for the future.”

Adrian Sutil: “It was a normal race. I had quite a good start. Afterwards Kevin (Magnussen) drove into my car, and I dropped back many positions. I still cannot say if my car was damaged or not. After this incident I tried my best to get back into the race. However, we had to switch to another strategy with three pit stops, which was not ideal. In general the pace was not good enough, so a better result would have been difficult to achieve. Finally, I want to thank the engineers and mechanics who have all worked very hard throughout the season.”

Caterham:
Will Stevens: “We completed the objective of the day, and that was to finish the race, which is good not only for me but also for the team – we can be pleased. I struggled quite a bit during my first stint on the Option tyre, trying to keep it up to temperature at the start during the formation lap, so I had a lot of graining on the front. But the middle stint wasn’t too bad and I was able to get into more of a rhythm. Towards the end I was feeling good in the car and it feels really good to have completed my first Formula 1 race! I want to thank all the fans once again for giving this team another chance to race, this is where we belong.”

Kamui Kobayashi: “It’s a real shame to finish the season with a retirement, but unfortunately this is what happened: I started to feel some strange vibration on the car and a couple of laps later it started to be un driveable, so the team decided to retire the car for precaution. Up until then, it had been a solid race, we had found a good pace and I was enjoying myself. Overall, it’s been a very positive weekend and I’ve been impressed with the whole team’s effort – it wasn’t an easy task but, thanks to the fans continuous support, we got here and they gave us that extra boost to carry on fighting. I also want to congratulate the team and thank everyone for their work and commitment throughout the season.”