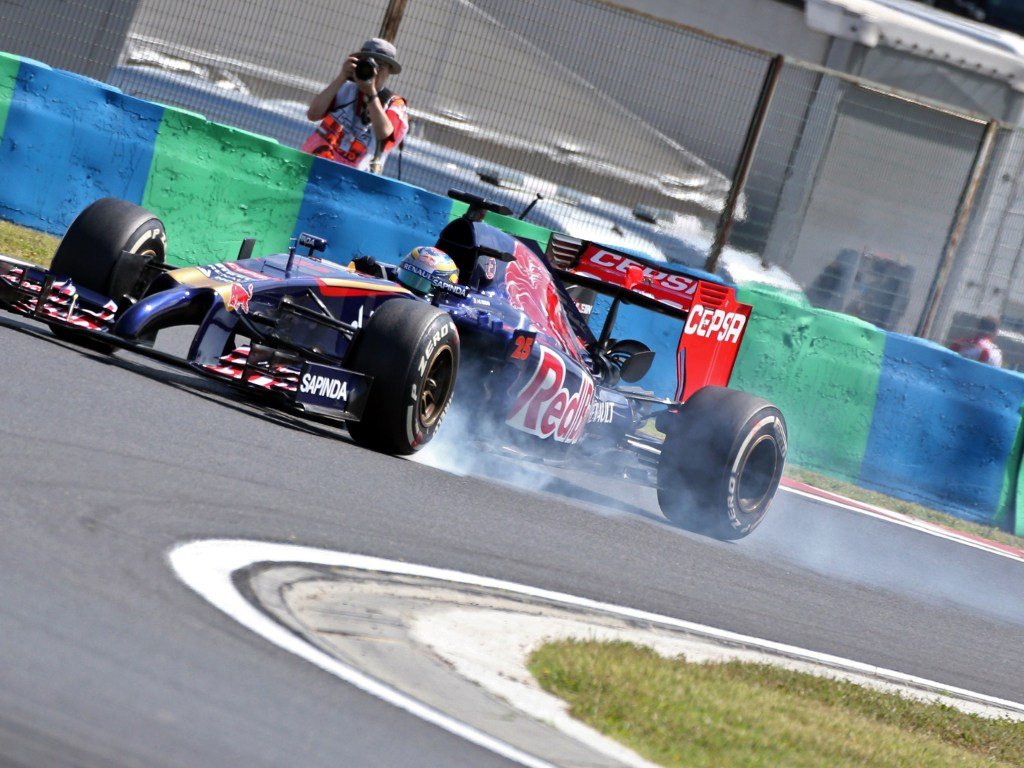 There were points in the German Grand Prix for Jean-Eric Vergne and Jenson Button, but Sauber miss out again.

Toro Rosso:
Jean-Eric Vergne: “I’m very pleased with the weekend, I think it was a good one. As for the race, the team did a fantastic job to call me in straight after the safety car and everything worked well. The race was really nice and I had a lot of fun being in second position for some time. I knew that I didn’t have the pace to keep up with the others around me until the end of the race but it was a great moment. Obviously I would have liked to finish in a better position to get more points but we still have to improve the performance level of the car. I’m confident that step by step this will come soon, so I’m really positive for the second part of the season.”

Daniil Kvyat: “This was a very tough race. I’m not sure what happened at the start, it has never happened to me before. The engine just stalled and so I was forced to start from the pit lane. The first half of the race was not too bad, I tried to catch up but overtaking was difficult and I had a hard time looking after the tyres, especially being stuck behind the other cars. It’s a shame we couldn’t finish the first half of the season on a high note, but I’m sure we can turn things around and come back stronger at the next race.”

McLaren:
Jenson Button: “I’m glad it was an exciting race for the fans, but it was a tough afternoon for us. We didn’t make the right decisions today. The opening laps in the rain were great: I got up into fifth – which wasn’t a bad position for us – but it went downhill from there. As the track started to dry, we thought it was going to rain again – unfortunately, however, we were the only ones thinking that. I feel like I did everything right, and in every track condition, which is why it’s tough – but we win as a team and we lose as a team, and we’ll quickly put this behind us and move on. It’s the perfect time for the summer break – obviously, we’re not where we want to be, but we’ve had some positive results, and the whole team has worked incredibly hard throughout this first half of the season. I hope that everybody can get the chance to recharge their batteries before we embark on what we hope will be a better half of the season.”

Kevin Magnussen: “We didn’t make the best of things today, but having started from the pitlane, I don’t think I really lost too much by choosing to stay on the Inters when everybody pitted for dries. I know we took a risk to wait for more rain, but I think we had to take that risk. I don’t think things would’ve been much different if we’d made a different strategy call, but we now need to sit down with the engineers and strategists to discuss it. Once we switched to the Prime, we didn’t have the pace to challenge for too many points. After a race like today’s, we just need to stay positive and look for areas where we can further improve. The whole team now has the opportunity to take a break, rest and return feeling stronger than ever. I want to thank everybody for their hard work, spirit and determination throughout these first 11 races – we can come back and achieve better things in the second half of the year.”

Sauber:
Adrian Sutil: “The race started well, as I could gain positions during the start. I was pushing as much as I could, trying to drive very precisely and consistently. I was able to gain some positions and everything was going in the right direction. During the safety car period I came in for the pit stop, everything was right on target. After the restart, I was fighting with Kimi (Raikkonen) and trying to keep him behind. The pace was good and I was also able to keep up with the drivers in front of me. It was an unfortunate ending, but there are a lot of positives we can take from the weekend.”

Esteban Gutierrez: “Finishing in P11 was very close to gaining one point. It was not an easy race, especially at the beginning with the difficult weather conditions and the two safety car periods. During the first safety car period we made our first pit stop. When I came to the box I had to wait as Esteban had not finished yet. I did loose some time, but I was fighting back. At the end I finished the race in 11th. In the corners I was faster than Jenson (Button), but I could not overtake him as he did not make any mistakes and drove away on the straights. However, it was a positive day as we came closer to the teams in front of us, and this is what counts.”

Lotus F1:
Pastor Maldonado: “It was a tough race for us. It was a struggle to find enough grip and the track surface was very slippery. We didn’t always have full power, which certainly added to the challenge in what was already a pretty difficult race with the changeable conditions. We weren’t able to close in on the cars ahead along the straight which made it hard to overtake, and there aren’t many places to overtake around here.”

Romain Grosjean: “The conditions on the circuit this afternoon were very tricky and we couldn’t get the best out of the tyres. We made the right call to move to slicks when the safety car came out – like most of the grid did – but I made a mistake when I was trying to keep the tyres warm. Unfortunately, I touched the white line and spun and that was it. I feel very sorry for everyone in the team who are giving everything they can to give me the best car possible. We didn’t finish the race today which is very disappointing.”