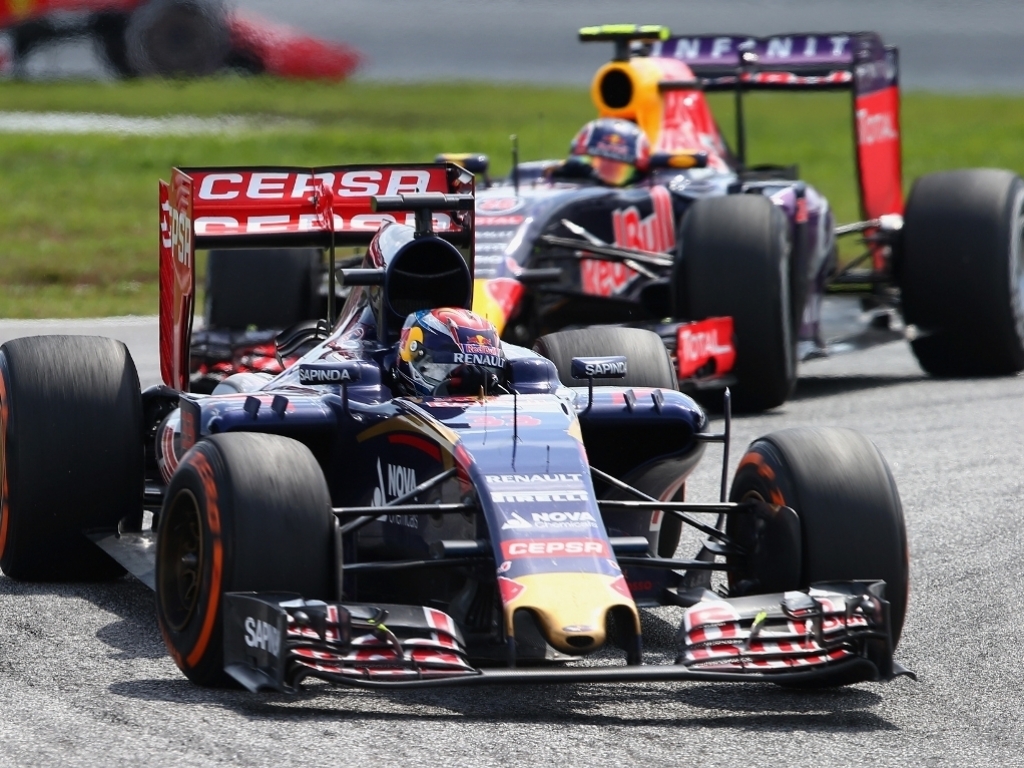 STR:
Max Verstappen: "I really enjoyed that! I’m very happy to have scored my first ever points in F1 and to end seventh! I think we did a great job as a team. The first few laps were a bit tricky for me as I was struggling a lot on the Medium tyres, so we boxed early for the Hard ones and that worked perfectly, the car felt great. We had a few good fights with other competitors and it was good fun. This was the right strategy and we did a great job managing the tyres. I felt well physically, it was quite hot at the end but I was still able to cope with it and be consistent, so I’m happy with that. This is a big boost for the team, we couldn’t have done a better job today."

Carlos Sainz: "It was a mega day for me today! A two-stop strategy at a track like Sepang was never going to be easy, but it worked out well in the end and it’s definitely made me forget yesterday’s result in qualifying. Starting from P15 and making it to P8 is amazing! There was a lot happening around me throughout the whole race, so it was very easy to lock-up, make mistakes or lose positions, but I kept calm and in the end it paid off. The conditions have been very tough here in Malaysia, much more than in Australia obviously, but we prepared well for it and I had no problems. Such a result gives us great confidence and motivation to keep up the good work. The team is doing an excellent job and to finish with both cars in the points is a great way to end the weekend."

Red Bull:
Daniil Kvyat: "We took the maximum out of the situation today. We are lacking some pace and need to catch up, I am confident that the team can do it; it’s a challenge and we have to face it with a strong mind. Fighting for P9 and P10 is not what we want, we struggled today and we need to work out why."

Daniel Ricciardo: "A really frustrating race. I was ready for a fight going into the race and hoping for something special – but it wasn’t to be! I had a bit of contact on the first lap, which hurt us and then we had a few issues throughout the race, which we had to manage. It took a long time to pass cars as we didn’t have the pace and we had some problems with the brakes, which didn’t make our afternoon easy. It was a good job by Seb, a great drive from him."

Lotus:
Romain Grosjean: "Overall we had quite a good race with a strong first lap and some nice overtaking, although I lost a lot of time behind Hulkenberg and then the spin with Perez in such a fast corner. I had some fun overtaking with Red Bull, Toro Rosso and Force India, which was great, and we had a good strategy but we lost too much time to benefit from it. I also had an issue with my drinks bottle which added to the fun. Overall the car behaved well though and we’re not far from the top ten so we’ll work to close the gap for China."

Pastor Maldonado: "The potential is clearly there, especially in the race where the car pace is very competitive and we can score good points. Unfortunately there was an incident on the first lap which lost me a lot of time and compromised the race from then on. Despite dropping to the very back fo the field, we switched to a different strategy and we recovered well. Unfortunately, we suffered from a brake issue, which isn’t great but it’s effectively our first race and we need to keep working through issues, ready for the next Grand Prix. As soon as we have a clean race, we will be fighting for good points."

Sauber:
Felipe Nasr: "It was overall a difficult weekend for me. I was struggling to find a good set-up for the car. We need to reflect and understand why we didn’t have enough pace. The race itself was not easy, as I had contact early on with Kimi (Räikkönen). I should have avoided this incident, but it can happen sometimes when we are racing. Now we have to look forward to the next race weekend in China."

Marcus Ericsson: "It is a very frustrating end to a good weekend. I felt comfortable in the car straight away and had a good start during which I could make up one position. Nico (Hülkenberg) must have had a good start as he was ahead of me, but I felt I had more pace than he did. When I tried to pass him down to Turn 1, I went for the move to the outside. I know it is possible to overtake there, but unfortunately I lost the rear, went off and got stuck in the gravel trap. Anyway, we need to take the positives out of this weekend, and I have learned from what happened in the race. In China we will be even stronger."