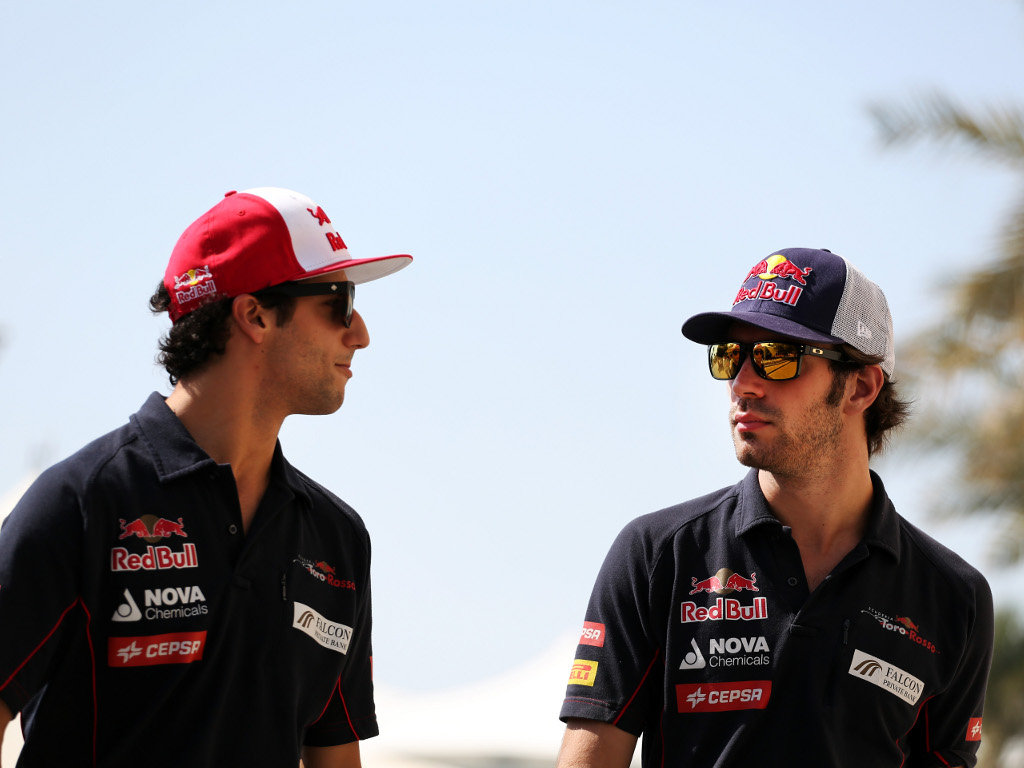 Toro Rosso:
Daniel Ricciardo: “This was not at all the race I was hoping for. In this sport, if the start doesn’t go well, it’s hard to recover, so I want to look at the data to understand what happened. The car didn’t get off the line well and then, at Turn 1 there was a bit of chaos as I dropped back into the group behind me. I had to run wide to avoid some accidents and from then on, my race was pretty much over. At the moment, our pace is not sufficient to fight back into the top ten if something like this happens. We must see what we can do to have better starts, because when we get good ones, we have generally gone on to score points.”

Jean-Eric Vergne: “This is a very disappointing result. To sum it up, going for a one stop strategy was the right decision, but we made the change from Soft to Medium a little bit too early, so there was no life in the tyres towards the end, just as all that group of cars came up behind me. The original plan was for a two stop, but looking at how the race was developing, we decided to take this gamble, but it didn’t pay off. I tried all I could to keep the tyres alive, but it was not enough. A shame, as I was in the points for most of the race, especially as the car felt good and I was running at a strong pace. It seems that luck is just not on my side this season, as it’s not the first time I’ve been having a good race until circumstances have worked against me. The incident with Alonso? For a while now, if a driver puts a wheel outside the track when overtaking he gets a penalty and he had four wheels outside the line. In any case, he would have passed me down the next straight as I was struggling with my tyres by then.”

Caterham:
Giedo van der Garde: “I have to say that’s one of my best ever races. The car was great today and the work the boys did in the stops, they were really on it and that helped a lot in the race. At the start I was ahead of Raikkonen who made contact with my left rear in turn one. I nearly spun after the contact, and lost a bit of time to my teammate and Chilton, but both Charles and I passed him by the end of the second lap and then we also got Bottas. I’m obviously pleased the luck went my way this time and I made it through the first lap and from there the car was feeling great, just really well balanced. In the first stop I went from softs to mediums and I could really push everywhere – I had a bit of oversteer but nothing too bad. I was behind my teammate after the stops but had more pace and the team made the call to let me past – with clear air I could really push and opened up a gap to him right to the flag. We know we need more luck and things to happen to the cars ahead to be able to get back tenth place in the championship, but it’s still good to have finished so far ahead of our nearest rivals. We need to carry that form through for the final two races and I know that if things come our way, we can do what’s required to finish my rookie season on a really positive note.”

Charles Pic: “The car’s been understeering all weekend and it just carried on the same today in the race. I had an ok start, passed Chilton and Bottas by the end of lap two and was immediately pulling away until the first stop on lap eight when we went from options to primes. In the second stint the car just didn’t have any balance I could work with. I was ahead of Giedo but the team told me to let him pass so I did but with the way the car felt I couldn’t get any more out of it. That was the same pretty much right to the flag – in the final stint it felt a bit better but still nowhere near enough what I’d wanted.”

Marussia:
Jules Bianchi: “I think we are quite surprised by our performance today after we had seemed to arrive at an improvement in qualifying. It was a very long race, I have to say. The car balance was not as we expected and I had to really push very hard to keep pace with the Caterhams, which is not ideal for managing the tyres. I think we will have to have a good look at everything before we go to Austin as, in theory, our new developments had seemed positive. It has been a tough weekend so we hope for better things in the final two races.”

Max Chilton: “That was a tough race for us today. We’ve made some good progress this weekend but for some reason we were unable to show that today. The start was good – again – so well done to the Team for getting on top of that because that last few races have been very good in that respect. Into the race the car balance was difficult and we were just battling for pace. It’s a shame, because our new developments seemed positive, but they haven’t translated into the race today. On the plus side, I finished yet another race – so that’s 17 out of 17 now – and of course we still hold position in the Constructors’ Championship. I think we have a lot of work to do to get on top of this before Austin as we need two strong final races.”