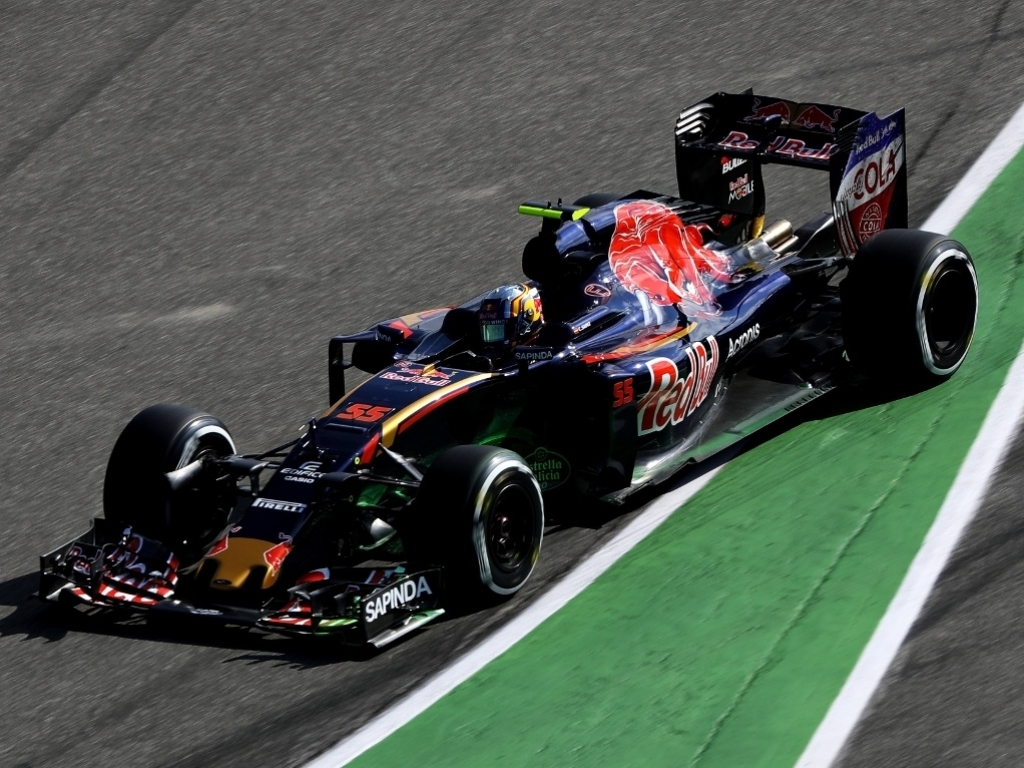 At the back of the grid, Sauber driver Felipe Nasr suffered a late retirement at the German Grand Prix while Toro Rosso Carlos Sainz failed to impress.

Toro Rosso:
Carlos Sainz: “It wasn’t the best of races… Starting from P15 because of the three position grid penalty meant it was never going to be easy, but we had a good start and the first part of the race wasn’t’ that bad. We were able to overtake quite a few cars, make a good recovery and get very close to the points positions, racing in P11. It even looked like another comeback was possible, but we lost quite a lot of time during our first pit-stop, and that cost us the places we had gained earlier out on track. From then onwards we were unfortunately stuck in P14, which is definitely not where we wanted to be. I’d say it’s not the perfect way to end the first half of the season but in general I’m happy with my performance so far this year – now it’s time for a well-deserved break but I can’t wait to go back racing again in a few weeks’ time!”

Daniil Kvyat: “Our race pace was a bit more consistent today and we had some good laps, even though we were missing a bit of grip and power in the straight lines. It was therefore difficult to battle the other guys ahead of us and it was a tough race, where we ended quite far away from the points. We now need to see where we can improve, try and maximize our strong points and come back stronger for the second part of the season…today’s pace is not enough. I will now use the summer break to recharge my batteries and come back as fresh as possible for the next races.”

Renault:
Kevin Magnussen: “We decided on a two-stop strategy before the race as all the data pointed to it being the correct thing to do, however we saw that the three-stop strategy of our rivals worked better today. This wasn’t immediately obvious and we were too committed to the two-stop so it’s a lesson learnt. We were too slow on the soft compound on the final stint and our degradation on the supersoft was greater than expected which undid our opportunities of finishing higher today.”

Jolyon Palmer: “Everything was really positive coming into this event, and I had a good start ; I think I was up to tenth, so it’s a disappointing result today. I had a big lock up in turn two and massively flat-spotted my tyres. I could barely see where I was going because of the vibrations and I tipped a Williams whilst trying to hold on from one of the McLarens. This damaged my front wing which we changed at the second pit stop. After that there wasn’t much I could do. It’s a shame but we can take the positives, put the rest behind us and focus on the second half of the season.”

Manor:
Pascal Wehrlein: “I’m really happy. It was a very straightforward race, so there were no opportunities to improve further through the field, but we still achieved our target of finishing ahead of Sauber and we got a Renault too. So it was a good race. I was on a three stop strategy, so it meant that there were many cars to overtake – and overtake again – so it made the race very interesting and fun. For most of the race I was running without a front-wing end plate, but it didn’t hurt us too much. It was a very special atmosphere and you could really feel the crowd. Before the race, we stopped in the Motodrom to greet the fans and they were really great and supportive. It is something very special to see so many German flags and I think they got a good race today after so long without a German Grand Prix. I’m happy that I got a good result too. Now we have the Summer Break and though I’m not that eager to hang up my helmet for four weeks, everyone in the team deserves a holiday, so my thanks to them and I’m looking forward to us coming back stronger than ever in Spa.”

Rio Haryanto: “Overall, the race wasn’t too bad for me. We were still fighting with Sauber, which is what we need to keep doing. Early in the race, I saw an opportunity to pass my team-mate when the gap between us came right down. Unfortunately it didn’t work out and we ended up touching, so I damaged my front wing in the process. We kept going until my first pit stop and in the meantime I was able to keep in touch with Ericsson, just ahead between Pascal and me. We knew we had some damage, but we kept going until our first planned stop, then made the nose change at the same time. It takes a bit longer, so I lost some time, but after that I was catching back up to Ericsson and trading places with Nasr as our respective strategies played out. It was a good weekend for us and a nice result for the team at an important race for us. Not too much rest though; we’re busy working to ensure I continue into the second half of the season. But I do wish the rest of the team a good break because it has been a very long 12 races and everyone has worked incredibly hard. My thanks to them for a good job so far.”

Sauber:
Marcus Ericsson: “Bearing in mind that we started from the last row, it was a decent race. It was a good start during which I could overtake some cars going down to turn 1. But then one car in front of me had a moment and braked a lot. I had to brake as well, and fell back to last position after the first corner. That was disappointing after having a good start. I am definitely not happy with P18, but we knew it was going to be a difficult race. We did what we could.”

Felipe Nasr: “It was not a good day for me. My start went well, so I was able to gain a few positions. I felt my tyres were losing grip quickly. We lost some time during the first pit stop, as my call to pit came too late. Towards the end of the race, I suddenly lost power. I had to stop the car due to a technical issue. It is a shame to finish a race this way, but this is also part of racing sometimes.”