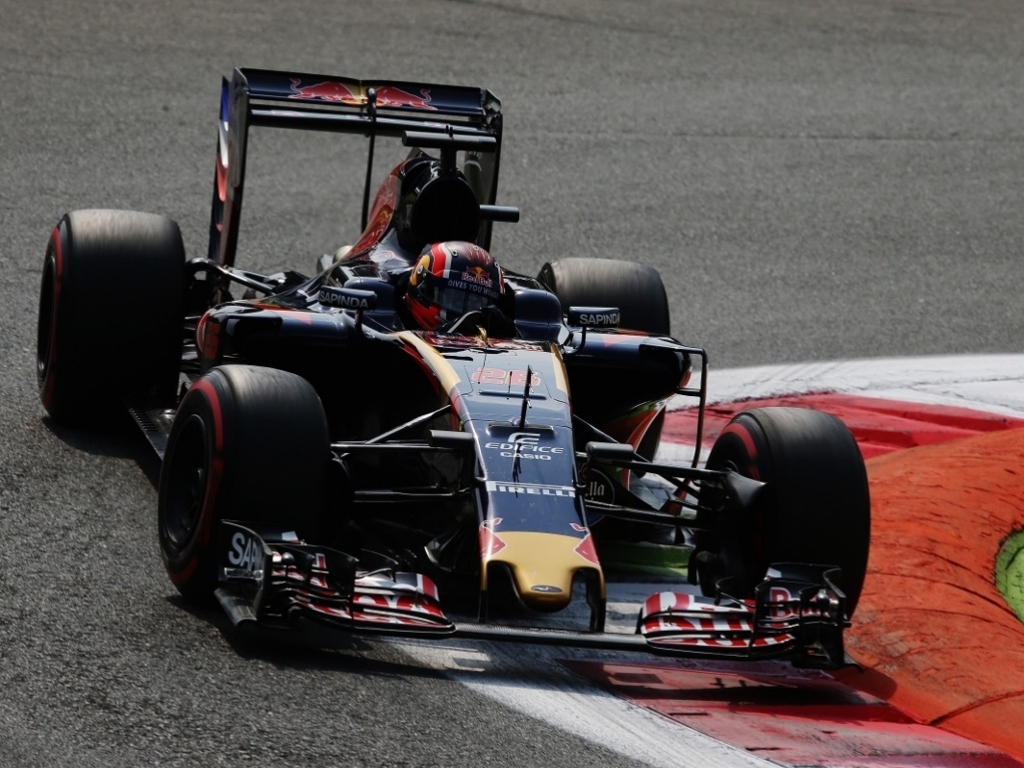 At the back of the grid, a driver from each minnow team suffered a retirement while Jolyon Palmer and Felipe Nasr collided with each during the early stages.

Toro Rosso:
Carlos Sainz: “I think we tried everything we could today to make it into the points, but when you just don’t have the pace, it’s impossible. We had decided to go for a one-stop strategy and at one point it looked possible, but in the end I was losing too much time so we had to pit for a second time… Not the ideal race, but all I can say is that we extracted the maximum out of the car today and in the end a P15 was the most we could achieve. Here the car behaved better than last week in Spa, so this is something positive for us – the last three races have been very tricky, racing at very power-dependent circuits, and this has made it very difficult to fight… Hopefully in Singapore this situation changes a bit and we can get back to where we deserve to be.”

Daniil Kvyat: “Not the race we wanted. We had an issue with the floor, which got damaged after Turn 1, as I was sandwiched by a few cars, and we therefore lost a lot of downforce… A part from this, the battery was also constantly overheating, so we decided to retire the car. We knew it was going to be difficult here, but it’s a shame to have to end my race early… We just need to be patient and hopefully the next tracks will suit us better.”

Sauber:
Marcus Ericsson: “It was a decent race. It is surely disappointing that we could not fight for points higher up in the midfield. It feels like we have taken a step forward compared to the race weekends before the summer break, but we are not where we want to be yet. Monza is unique in terms of the track characteristics with it being a high-speed circuit. The track in Singapore requires much more downforce, so it will be interesting to see our potential there in regards to our package.”

Felipe Nasr: “It was a disappointing early end of the race for me. Again I had quite a good start, moving up four positions. It is a shame we had to retire the car after the collision with Joylon (Palmer), as the damage was not repairable. I hope we will have a trouble-free weekend in Singapore.”

Renault:
Kevin Magnussen: “My start was okay but there were incidents everywhere… I had a better start than the Saubers ahead of me, which meant going around them, then another car on the grid. After that, I was able to build-up the momentum into turn two but had to avoid a spinning car by going on the grass. From then on, it was a quiet race with just a bit of early action with one of the Manors. It’s a shame that we didn’t get a good result today but we still learn more about the car every weekend and this race was no exception.”

Jolyon Palmer: “I had a really good start and made a lot of positions. I was alongside Nasr through turn one with no problem then he decided to run me off the road in turn two. I can’t explain why he did that or imagine what he was thinking. I went as far off the track as I could without risking a spin from the gravel and he still made contact with me. There was no racing room and both our races ended way too early. For me I feel I’m driving better than ever and I’m hopeful that will show in Singapore.”

Manor:
Esteban Ocon: “The objective was to take the chequered flag, but in a much stronger position. It was a long, tough Grand Prix from where I started. We were on the Medium tyre for a very long stint – 32 laps – and none of the opportunities that we hoped might change the face of the race happened. At the end, on the Soft tyre, we were really on the limit. So it’s good to finish, especially after the problem for Pascal’s car. That’s two race distances with a lot of learnings about the tyres and managing races, but now I’m ready to use that experience to fight for something more. I think we were capable of much better here, so it’s a shame. The last two races have had their difficulties, but they were also my first two races in Formula 1. I achieved my dream in Spa, after a long road to get here, and when things did go our way this weekend, we saw that the car is improving, same for me. I’m disappointed today, but I’m looking forward to better things in the seven remaining races. It will come good for me soon.”

Pascal Wehrlein: “Pretty disappointed, of course. When I heard my engineer telling me to “Stop the car. Stop the car”, I couldn’t believe it. I had to check what I was hearing. Of course, it was for good reason, to protect the car, so I knew what I had to do – I just didn’t want to believe it, I guess. The team is making really positive steps with the car, though the positive signs must make today’s retirement all the more tough to take. Splitting two McLarens in qualifying, the expectation that you can fight for Q2, if not higher, and fending off the competition in qualifying and in the race. Yes, today’s situation is difficult to take, knowing what is possible from the car and having pushed so hard all weekend again. But I know the team will want to sort the problems out as quickly as possible; it’s disappointing for everyone and we can’t afford for a good result to get away from us again if we are to protect our position in the championship. We’ll come back fighting in Singapore, a race I’m really excited about. I hope we can make it happen for us there.”