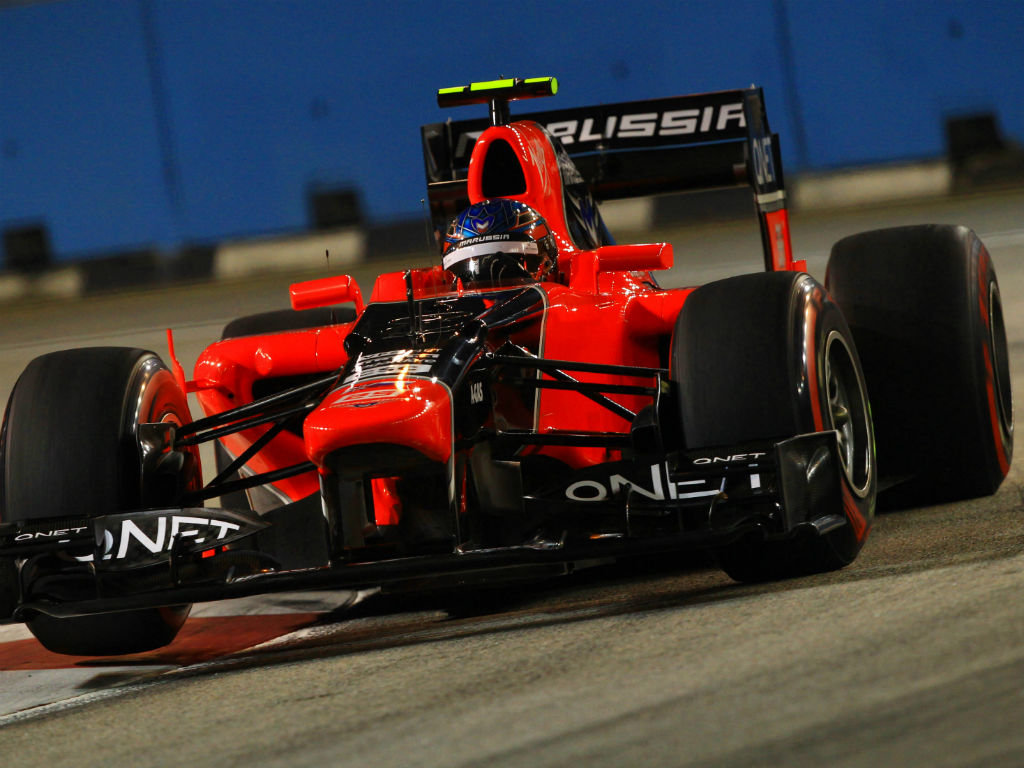 It was a disappointing Sunday in Singapore for Williams who failed to score as did Marussia, Caterham and HRT…

It was a disappointing Sunday in Singapore for Williams who failed to score as did Marussia, Caterham and HRT…

Williams:
Bruno Senna: “Considering we had a few problems we were having a good race. I had a very eventful first few laps but was able to overtake when I needed to and had good pace at the beginning. It’s one of those races that we knew if we could finish we had a good chance of scoring some points but unfortunately we couldn’t. With 16 laps to go I lost KERS and so it was difficult to defend towards the end, but that’s racing. I’m happy with the race I did today, being able to come from 22nd to be fighting for points.”

Pastor Maldonado: “Today was difficult. The conditions were hard in the race as it was so hot and tyre degradation was high but we were managing well. The start was ok but I ran a bit wide on cold tyres losing a couple of positions but then we got into a good rhythm. Our pace was looking strong, as we were expecting, but then we had a hydraulic problem and that was the end of our race. I’m now confident for the next race as we have the potential to be fighting for victories and I hope to have a better race in Japan.”

Marussia:
Timo Glock: “An incredible race for us. In general I knew that, with our strategy, we could really do something if we stayed close to Kovalainen in the first stint and that’s what I tried to do – to get everything out of the car. Unfortunately, the rear tyre pressures came up a bit too much and I overshot the car in turn 19 and hit the wall. In the first moment I thought the race was over and I realised that the toe was really out; I had to change my driving style and, actually, changed everything that I could do to keep the car on track. I had to get used to the behaviour of the car, so I was saving the right-rear tyre in all the left-hand corners and squeezing everything out in the right corners to get the lap time. When the safety cars came out I knew that mixing us in the pack gave us a chance to fight again. After the first safety car I could go quicker than Heikki and in the end, when he turned into the pits, I knew I needed to push everything out of the car before he came back at me with fresh tyres. In terms of the pit stops, the team made a really good job and that is getting very consistent now. We do of course need to hold on to 10th place until the end of the season still and I hope we can. Over the last four months we have really closed that gap to Caterham and this is a very nice reward to everyone in the team because it has not been easy. We’ll enjoy the moment but keep pushing now for the next race and beyond.”

Charles Pic: “First of all I have to say well done to the whole team. Today’s team result is very important for everyone and it is a very nice reward for all the incredible hard work at the track and back at the factory this year. For me, I am happy with my race, finishing in P15 but dropping to P16 with the 20 seconds added. The plan had been to do a two-stop race with two long stints on the Soft tyre, but with the safety cars that didn’t work out. We were obliged to make a very long last stint with the Supersoft and we had big degradation because of that. Overall, it has been a strong weekend and I am pleased with my performance from FP1 to Qualifying at what has perhaps been the more challenging of the new tracks I have tackled for the first time this season. And there are a few more yet to come! Overall though, racing here in Singapore has been an incredible experience and one I look forward to repeating.”

Caterham:
Heikki Kovalainen: “For me that was a good race until the safety cars. We decided to stay out but when we restarted for the second time I’d probably been out too long and the tyres were starting to give up. I had to stop again and there wasn’t enough time to recover from there so that was the end of the race – If it hadn’t been for the safety car I’m sure we’d have finished much higher. Now we need to dig even deeper to find more performance from the car. We’ll look at what went wrong this weekend and I’m sure the team will analyse everything and see where we maybe need to make some changes, but we won’t stop fighting.”

Vitaly Petrov: “I had a fantastic start, passed at least two or three cars but then I saw a car to my right make a pretty aggressive move left so I had to move to avoid that. I was very close to Massa and already into the braking zone so unfortunately we had contact and my front wing was damaged, forcing me into the pits. Really, that was the end of my race and probably Felipe’s and I’ve already apologised to him as we get on well and it’s a shame we both saw our chances to race end so early, especially as the car has felt good all weekend. The safety car might have given me a chance to recover but we had a problem with the front left wheel nut and we’ll need to have a proper look at what happened. I think we also need to look at how we were using the tyres as maybe we could have got more out of them, but we have the chance to bounce back in Suzuka and we’ll make sure we do that.”

HRT:
Pedro de la Rosa: “I’m satisfied with today’s race. The safety cars helped me out, but I must admit that the race dragged on a bit for me, and the last five laps never seemed to end because I had no tyres left and I started to lose ground on Glock and Pic and Kobayashi, Kovalainen and Hulkenberg, who were flying, passed me like nothing. Physically it was a tough race but I finished quite well. We did everything we could with what we had and I think that we managed the situations well. For us it wasn’t easy at all to finish the race and that is a victory in itself. Now it’s time for Suzuka, a circuit I love, which I know very well and where I hope to give everything once again.”

Narain Karthikeyan: “It wasn’t my best race. From the beginning we had problems with heating and we lost a lot of time on straights, but we were managing it well until I went on the dirty part of the track and the car didn’t turn which resulted in me going into the wall. It’s further proof that there’s no room for error at street circuits. But I’ll keep my good qualifying session with me as that fills me with confidence ahead of the next Grand Prix. It was a shame not to finish it off with a good result in the race.”