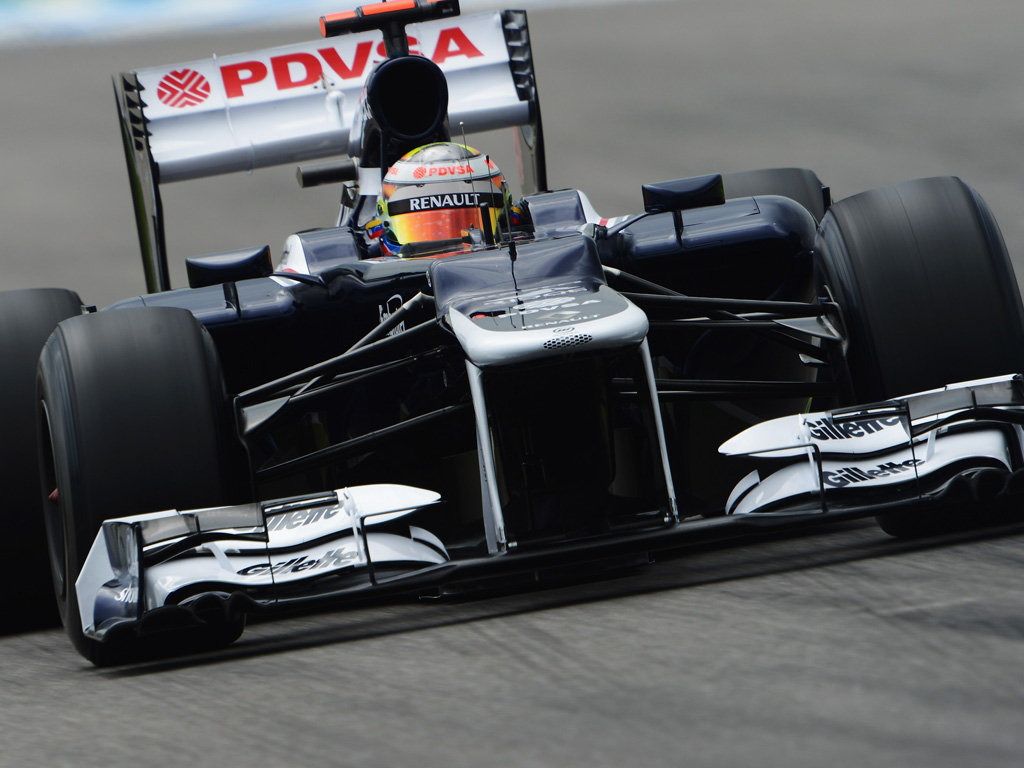 Williams failed to scored any points in Germany, joining Caterham, Marussia and HRT on that list…

Williams failed to scored any points in Germany, joining Caterham, Marussia and HRT on that list…

Williams:
Pastor Maldonado: “It was a difficult race today. We started okay but the car lacked pace in the second stint and I didn’t have the grip needed to maintain my position due to some damage caused in the early part of the race. The car improved a bit in the final stint on the soft tyres but we need to go away now and understand why we were not as quick as we were earlier in the week in time for the next race in Hungary.”

Bruno Senna: “I had a stronger pace in the race than the result suggests so it’s disappointing to finish where we did. It was unfortunate because I lost almost a minute on the first lap after I had to pit after making contact which put me right at the back, and from there it’s always difficult to make your way through the pack. Nevertheless we do have good pace in the car and if I can qualify higher up the grid next time then we stand a good chance of getting points in Hungary.”

Caterham:
Vitaly Petrov: “I am pleased with my performance today. It was a pretty quiet race for me and the car felt good right from the first lap, so I think I got as much out of it as I could today. The last stint was particularly good – I knew Senna was on the softer tyres behind me and I had to make sure I stayed ahead, so I just focused on getting it to the flag without making any mistakes and I’m pleased for the team with where we ended up. It’s encouraging that the car did feel better today. Our pace in the early laps was good, as it has been all season, and hopefully we can carry that through to Hungary – we certainly have a lot more data to work through now from having both cars finish today so that should help us more next weekend.”

Heikki Kovalainen: “The early part of the race was good for me. The car felt better than it has for most of the weekend and I was able to push, but then it felt like we had a problem after the second stop and from that point the front tyres were graining much more than they should have been. We stopped pretty late for a nose change to see if that could sort the problem out and it did as after that the car felt back to normal, but from then I was just focusing on getting the car to the end of the race. It’s pretty clear that the hotter the temperatures are the better we perform, so hopefully we’ll be able to show more speed in Hungary. It’s a circuit I like and obviously I had my first win there so let’s see what happens next weekend.”

Marussia:
Charles Pic: “The start did not work well for me, so we have to understand that and learn for the next time. After that the first lap went really well, so I was able to recover well. The pace was good and although we have not changed position, we continue to improve versus the Caterhams and pull away from the HRTs. This is positive, but not sufficient, and we have to keep working away at this to find more. I am quite happy with my race and our direction. The boys in the team have had a tough weekend but responded well and I would like to thank them for that. Now on to the Hungaroring. There is not much time but we will use these next days well to study the race today and I hope make some small improvements for next weekend.”

Timo Glock: “Not a great weekend for me. Even though it was my home race, quite early on it became one to put behind me and that was quite difficult I have to say. Since lap 10 the balance of the car did not feel right and it became very difficult to drive. We struggled for top speed on the straights and then towards the end of the race there was a problem with the differential and the last few laps were so tough. I couldn’t do anything with the car and was dropping back quite quickly. A race I won’t think about for very long.”

HRT:
Pedro de la Rosa: “I had a lot of fun in today’s race. Everything went well, we maintained a good rhythm and the tyres held out without any problems, but above all I’m happy about the fight I put up on the track. I was hunting down Glock’s car from start to finish and right at the end, when I saw that his tyres had nothing left in them, I overtook him in a place he didn’t expect. I’m very happy because, for the first time, we were able to beat a Marussia and overtake it on the track. The race wasn’t easy because I started to see blue flags very early on. It’s a big let down because once you see the first one you know many come behind. From then on you try to get out of the way, maintain your pace and not get your tyres dirty. And I think we achieved it. I hope we maintain this level and even improve on it in Hungary”

Narain Karthikeyan: “It was a good race for us because we battled with our immediate competition from the first to the last lap. In this sense I think it was our best race of the season so far. I lost too much time with the blue flags in my last stint, but I didn’t finish far off Pedro or Glock. Our pace and rhythm was good and the best thing about it is that we achieved this with no upgrades on the car, so we’ve definitely got good potential.”