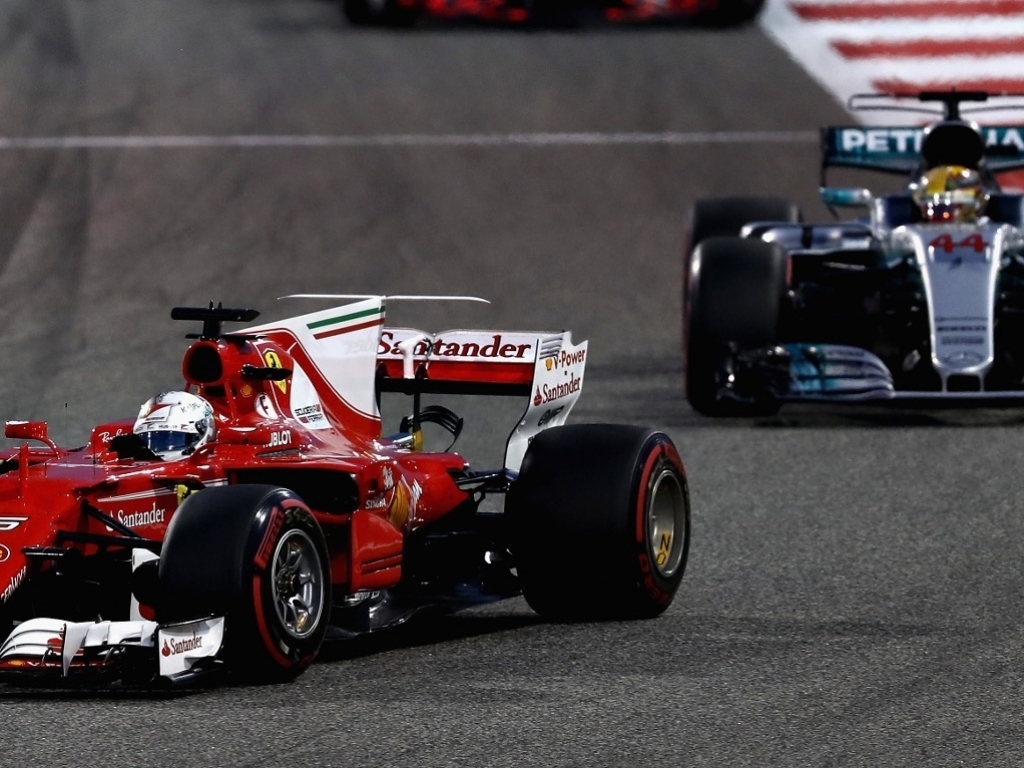 Sebastian Vettel claimed his third career win in Bahrain, while Max Verstappen retired early due to a brake failure.

Sebastian Vettel: “The start, obviously it was crucial for us to get between [the Mercedes’], to not allow them to get in their rhythm, pull away, do their thing. So, upset them a bit. I think we all had more or less the same start. Mine initially was maybe a tiny bit better than Lewis, which put me just about side-by-side – but their car is really long so it’s a long way to get side-by-side – but then I think I benefitted from the fact I had a clear track ahead, Lewis was a bit stuck with Valtteri and it’s a bit of a tricky one to judge, so I could just take lots of risk under braking and get the move done. Then, the final stint, obviously we had quite a decent gap plus the safety margin of Lewis’ penalty – which I wasn’t sure why but it didn’t matter at that point – and I just tried to control the gap to Valtteri, maybe pulling away a little bit and at that point just controlling the gap. He was very fast when he came out. I was expecting him to be quick on a new set of supersoft tyres but probably not that quick and he was closing in. When I faced the traffic I lost a lot of time but then obviously he had to face traffic as well. In the end it was safe enough. At the beginning of the stint I really didn’t push at all, just took it easy and responded to what those two guys were doing, which obviously helped me at the end because I had a lot of tyres left.”

Kimi Raikkonen: "I had a bad start and then an awful first few corners because of that. Obviously, after that, played catch-up…A lot of good things, in a way, happened but obviously the end result is still disappointing, in my book at least. Overall feeling [is] a lot better and I feel that I can go fast but obviously the start didn't help. I got reasonably quickly past Massa – then I was a bit unlucky with the safety car and lost a place again back and then tried to get past him again, and obviously at that point I was a bit behind. He [Massa] seemed to be very fast in certain places and already first time around was quite tricky to pass him, it felt a bit more difficult the second time. I managed to pass him in the end but it just takes a long time, they're usually very fast in a straight line, Williams. The first lap obviously was not the ideal position, and the safety car… it's unfortunate how it went, we had some good speed."

Lewis Hamilton: “It's been a challenging weekend. The start of the race was OK but Sebastian was in my blind spot so I didn't know where he was and I lost a position there. It was really hard to follow but we generally had similar pace. Under the Safety Car [before the first stop], I just misjudged the situation; that was my fault, so my apologies to the team. I had good pace in the second and final stints and we honestly thought we could catch Sebastian. But the five second penalty made that twice as hard. I believe it was the right choice to go with the Soft in the final stint. I think that was the best call as I still had a long way to go. Our guys have been making good calls all year so far. I tried my best to recover from the mistake but it wasn't quite enough. We still come away with good points.

Valtteri Bottas: “Not a good day. We had an issue with the tyre pressures at the start. I don't know what it was but I could really feel it in the first stint and was sliding around as early as Lap 2. The pace wasn't good and Sebastian put us under real pressure. I tried to extend the first stint but I couldn't keep up with the pace. The second stint was better but I was still struggling with oversteer and then I couldn't get the rear-end to work in the last stint. Under the Safety Car at the first stop there was a problem and we lost some time in the stop; maybe otherwise I would have just been in front but I know that the team will investigate the issue. I had some good racing with Sebastian after the restart but unfortunately it was just for a short moment. I've not had the race results that I'd been hoping for so far, but will be targeting a strong weekend in Sochi.”

Daniel Ricciardo: “For me it was a race of two halves really. At the beginning of the race I genuinely thought we had a chance to win. That stint was looking very competitive and I could see Valtteri was struggling. I was at the tail end of the front pack and I could see everyone else in front of me. They were sliding and looked like they were struggling more. It was quite easy for me to stay there and I was looking after my tyres, so at that point I was thinking it could be on today, not only for a podium but for a win. The safety car worked for me in that we jumped up to third but it wasn’t so good for our tyres and that’s where we lost a lot of ground. Even once we settled into a pace and the chaos settled we fell back and I was struggling with grip at the front and rear. We never really got that tyre working for us today.”

Max Verstappen: “I had a good start, Kimi struggled a bit off the line so I passed him straight away and then I went round the outside at turn one and overtook Daniel which put me in a good position. After that I could keep up with the leaders, the car was performing really well on the tyres and the pace was good. I think we made the right call with the pit stop to try and undercut the two Mercedes but then the rear brakes failed on lap 12 and it was race over. These things are all a part of racing and there are definitely positives to take away from today. The car was working a lot better here than the previous two races so it’s just an unfortunate ending as we could have scored some really good points.”