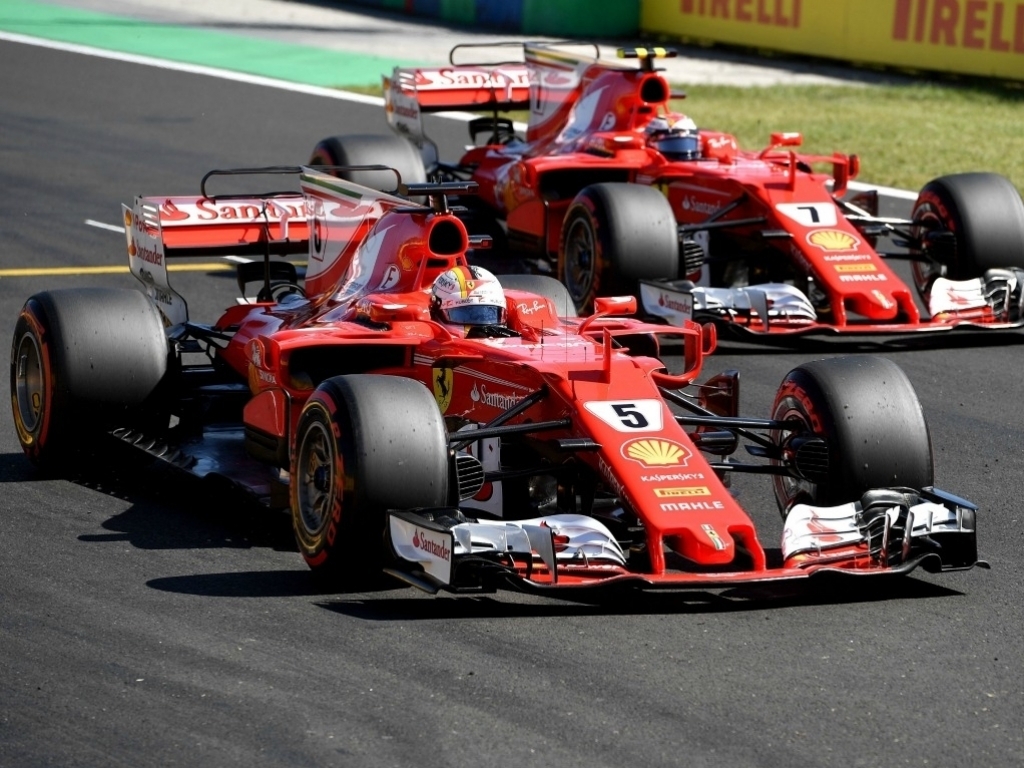 Sebastian Vettel: Everybody inside the team can be very happy and proud of what we have done today! Afterwards, I said to Kimi that I was sorry, because I was slow and struggling during the race. For Kimi it was not good to be there in the middle of a sandwich. It was a tough race that, in the end, kept a good shape. I developed a problem with the steering wheel and I don’t know why yet. We need to avoid it happening again of course, but during the race I didn’t have an option. It’s not like parking the car, check if everything’s all right and then fix the problem. It was quite annoying because it was a strange feeling. But then, at some point, I forgot about it and just tried to get used to it, which was tricky because it just kept changing and getting worse. However, in the end the pace was still there. More generally, I don’t like the short term view that some people have, that after a good race everything is great and you are the hero, but after a bad race it is a disaster. It is not fair because people work hard spending a lot of time, working all together on the car. In my opinion, we have the best car and downforce which, hasn’t been the case for many years. In the end we can make a difference and we have done that so far. We have our testing days here next week and we have a lot of work to do. After that there will be the Belgian GP. Our car has been good there and I think we have some improvements, so it should be fine.”

Kimi Raikkonen: “Today my car was amazing, the handling was perfect and I was always feeling comfortable; even following Seb from very close behind, the behaviour was fantastic. I had no worries that Mercedes could get me. I had a pretty good start and a good run in the first corner; then I took it quite easy. In places like this it’s tricky to try and overtake and I did not want to force things too much with my team mate. When you end up between two cars is not the easiest situation. When they called me for the pit stop I wanted to stay on track a bit longer because I felt I had the speed, but the team has the big picture and I trust them. I ended up following Seb through the whole race and I was never able to use my full speed. Today I knew I had all the tools to finish in a better position, but I should have done a better qualifying. I’m happy for the result that we achieved as a team and this is the main thing. I’m here to win races, but if you take the big picture it was a great weekend, we got the maximum out of it.”

Valtteri Bottas: “It was really tricky today. The pace was not so much a problem. But once you get within 1.5 seconds to the car in front of you it becomes so difficult to close the gap. And that track position was a big benefit for Ferrari today. Even though Sebastian was struggling, no-one could pass him. We tried as a team to swap positions, but Lewis couldn’t get past them either. We didn’t gain any points but I’m glad we tried it. I was promised that Lewis would let me back if it didn’t work out. I was struggling with the back markers so the gap to Lewis became bigger than I wanted. But Lewis and the team kept their promise and we swapped positions back in the last lap. I don’t think every team-mate would do that in a championship fight, so I think that was really nice of him and it shows that he is a real team player. Our situations still is not too bad with regards to the points and the championship standing. Lewis and me are still in the fight.”

Lewis Hamilton: “I tried my best out there. It’s tough when you push so hard and you work so hard and you end up in the same place that you started. When the radio didn’t work, I was thinking that the team was worried about the tyres not going the distance. So maybe they were going slow so that they could speed up later. I was pushing and I had all this pace, but I was stuck behind Valtteri and I couldn’t tell the team because of the radio. But in the final laps, I kept my word. I said that if I couldn’t pass Kimi then I would let Valtteri back. I have said through this year that I want to win this title in the right way – and perhaps I will look at it in a different way if, at the end of the season, I lose out by a small margin – but I believe in doing the right thing and that when you put good things out there, they come back to you. I was 20 points behind before, but down to one, and now back to 14. We have lost quite a few points in the first half of the year – but I know that we can win it, once we come back even better after the summer break.”

Max Verstappen: “I think the situation started from Turn 1. My start was actually quite good but then I got squeezed a bit wide on to the astro-turf and lost quite a bit of speed. Then Daniel and I were both fighting for position at Turn 2 so we braked quite deep into the corner. I had a car in front of me so I lost quite a bit of downforce and locked the front tyres, from there I was just a passenger. I was trying to avoid Daniel of course but unfortunately that was not possible. It is never my intention to hit anyone, but especially not your team-mate, and especially with the relationship I have with Daniel, it’s always really good and we can always have a laugh. This is not nice and I apologise to Daniel for that and also to the team because we could have scored some good points here. I’ll speak with Daniel in private and we’ll sort it out. It was actually a positive Sunday in terms of pace. It’s not nice what happened in the beginning of the race, so I’m of course not happy with that, but at least the car is moving forward.”

Daniel Ricciardo: “The start wasn’t too bad and I got a good exit out of Turn 1, I saw Bottas on the inside of Turn 2 so knew I had plenty of room on the outside. I thought it was a good place to position myself and protect my position through the turn. I felt a hit but couldn’t see who it was, I knew Max was on my inside going into Turn 2 so assumed it must have been him. It’s really frustrating as we know our car has been better than sixth all weekend so we went out there to push for a good result and get on the podium. We will discuss the incident in de-brief this evening and me and Max will talk privately also and sort it out. I would have loved to race today and now I have four weeks to wait until I can get in the car again. It’s a shame to finish the first half of the season and head into the summer break in this way.”