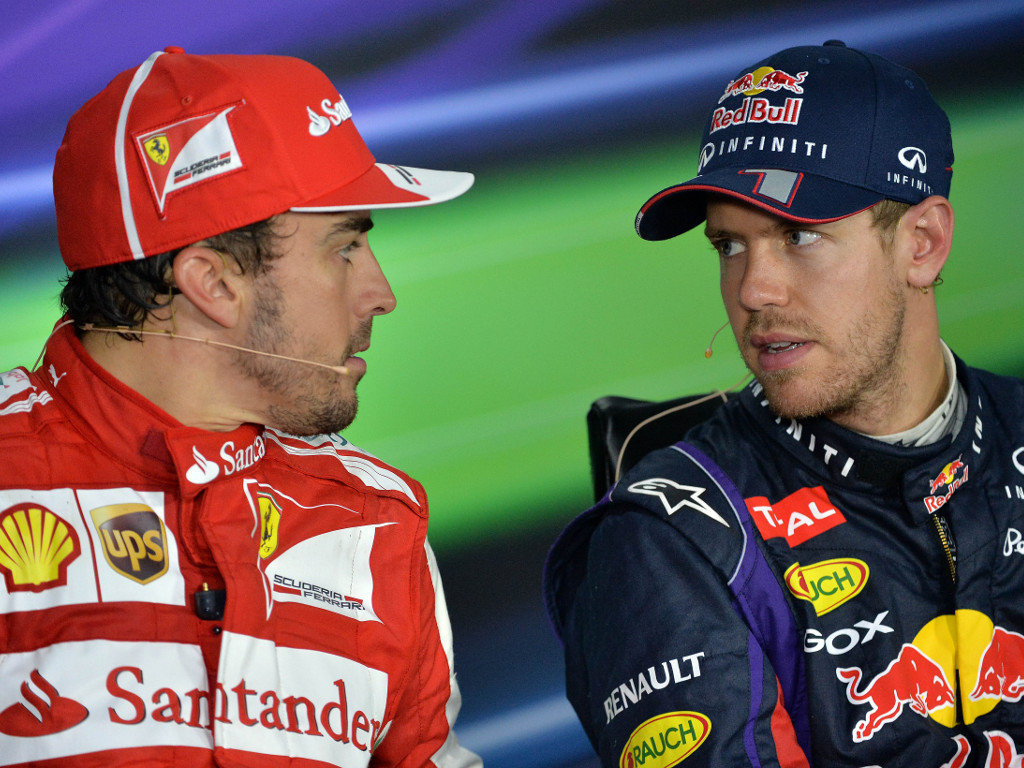 Q: [to Vettel] Three World Champions, I’m spoilt for choice here. What a great win, a text book win, pole position, you seemed to win it at ease. Tell me about it.

Sebastian VETTEL: Thank you. Thank you everybody. I think it wasn’t that bad for us, I think. Yeah, great race, I had a very good start, which was important and then I was able to really go with the car and yeah, obviously on the supersoft we saw the tyres were falling apart but I think we were just as good as everybody else. I was able to build a gap and then kept that gap basically the whole race. At some stages we had a full pitstop on hand and it’s a little bit easier then to control the race, control the gaps etcetera. Great race, great job by the team. I had perfect pitstops even though we had some time on hand. And also for North America, I think it’s a great race for Infiniti. All in all, a very important race for us to win. Finally we get it off the list. Very proud of that. The sun came out today. Couldn’t get any better. Racing in front of the crowd here is always…

Q: …I have to ask you about that because it seems quite unbelievable to us that you’ve never won here before, nor indeed has Red Bull. So what does it mean to get the monkey off the back?

SV: Yeah, obviously we’ve had good races before but it didn’t come together to win. Two years ago I was very close. I lost it in the last lap, it was my mistake, so made up for it today. Great feeling, as I said. Great car today by the team and I think we were able to really pull away from the rest of the field, which was most important to then control the race. I could really enjoy every single lap. Difficult at stages through the traffic but as I said, great and …

Q: [to Alonso] …When I read your report yesterday when you said that you thought you may have a chance to come from sixth position to hopefully get a win here, I was saying ‘how’s he going to try and do that?’ And you nearly did it. Magic, magic tenacious drive.

Fernando ALONSO: Hello everybody first of all and bonjour. Yesterday obviously we didn’t have a good qualifying, I didn’t put the lap together and also the conditions didn’t help but we knew that the pace in dry conditions of the car on Friday was good, so we had some hopes. Obviously we are fighting with top drivers and I have a very good fight with Mark, with Nico, with Lewis at the end. And it’s not easy. Even if you have a little bit more pace, they are super-talented ones and it was difficult race. But at the end I think the second place has a victory taste because we scored some good points after a very difficult weekend.

Q: You seem to have a lot of fans here Lewis.

Q: I’ve got to ask you, we all were enthralled how clean, how correct and yet how exciting the fight was with Fernando. What did you damage on the car?

LH: I think some small part of my wing came off. It was very, very close, we had a good battle, he was very, very fair and I hope we can get a bit quicker in the next race.

LH: Yes, the car’s getting better and the guys are doing a fantastic job, so we just need to keep pushing to close the gaps to these guys.

Q: Well done Sebastian that must be, not a relief necessarily, but you must be very happy first of all to have won here finally and for Red Bull Racing as well. But there were a couple of moments where you very nearly touched the wall and you went wide as well. What happened in those two instances?

SV: Obviously I was pushing very hard at the beginning to get away and open a gap and yeah, I think it’s Canada, you obviously go close to the walls here or there, sometimes a little bit closer than I wanted but fortunately I didn’t brush the walls. I’m really just trying to just open as much of a gap as I can. I felt I had more pace in the beginning of the race, it’s difficult to foresee what’s happening later on, when you swap tyres, also in terms of range – how far we were going to get on each set of tyres. We weren’t sure if it was a one-stop or a two-stop. So all these things you don’t know so it’s good to have a little bit of time on your hands, which was the reason why I pushed very hard in the beginning. Obviously it was clear quickly after the first stint that we had a good gap and controlled it. Obviously it was difficult with the traffic etc, but I think we had a great car and we always had enough pace on hand to react and control the gap. In the end I went straight in turn one. I think I could have saved or caught the car, but I didn’t want to risk a spin. So I decided, should I stay should I go, then I decided to cut the corner, slowed down. Obviously there was traffic again with a backmarker, so I let him by to really make sure I rejoined the track in a safe way, which cost a lot of time. But yeah I was just a bit too late in the first corner heating the brakes.

FA: I think it was the pace difference was very, very small. With other battles we did maybe I was a little bit more fast, a little bit faster than the people I was catching. With Lewis we were really very close on the pace and there was some moments going out of turn eight to see who had the detection point and then in turn 10 the same thing, at the last chicane, so there was some action there. But it was nice to have these battles, particularly this race with so talented drivers, so intelligent drivers, that, you know, you fight wheel-to-wheel at 315km/h and you feel safe. You feel you are racing and you are competing. It can go your way or it can go the other way, but this is real racing. So, very happy to see this back after Monaco. It’s a little bit different.

Q: Lewis, once again on the podium here in Canada. We thought you might be trying to get Fernando back again. Was that a possibility?

LH: Clearly not, because I didn’t get him. He was massively quick and it was very difficult to keep him behind. I tried my best. I got close once he got past me, but he was just generally took quick for me. But you know, it’s still a good result for me considering that these guys are massively quick.