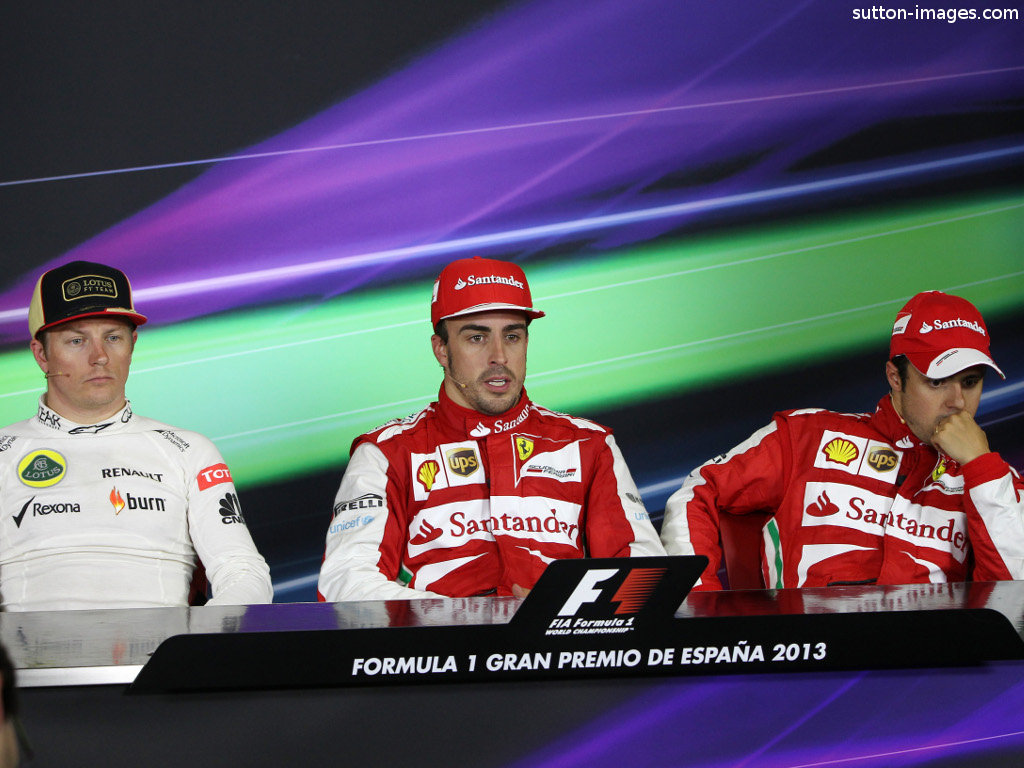 Fernando ALONSO: Well, hello everybody. Definitely it was a fantastic emotion and it really helped. You feel the support from everybody, every single member of the team taking care of every detail because we want to do well here, in front of our fans, so many people supporting Ferrari. So, we did it, we’re happy for that but we don’t want to stop here obviously.

How much today mean for your confidence that you can go on to win this championship?

FA: Nothing really changed. We know that we have five races only, some up and downs. Some races we had a good race with no problems and we more or less finished on the podium in all of them. Some races we had some mistakes, some mechanical problems as well that we don’t want to repeat. We know that we have a car to fight with the top and if we do well we can fight for the championship. If we don’t do good enough maybe we don’t fight but we want to do so.

Kimi, four points off the championship lead at this stage and you’re coming in under the radar so to speak, because nobody is really giving you enough credit for what you’re doing at the moment. How do you respond to that?

Kimi RAIKKONEN: I don’t mind. I’m here only to do as good races as we can and always you want to win and it’s disappointing to finish second but sometimes we have to take what we can get. Like I said, I don’t mind if people don’t notice us. We do our work, be happy what we do and obviously try to achieve in Enstone.

Is the lack of attention possibly helping you?

KR:It makes no difference really to me. We know in the team, and all the sponsors, what we try to achieve and what we are doing and that’s the main thing.

Felipe, what a great drive, from ninth place on the grid [to third]. Felipe, are you back to your very best?

Felipe MASSA: Yeah, I think so. For sure I was a little bit disappointed yesterday after the qualifying losing three places but anyway the race was very good for us, our car was fantastic. Very aggressive straight away. I gained back the positions. I think maybe in the first lap I was already sixth. Then overtaking cars. Struggling a bit with the tyres, to make it survive every stint in a good way but I think the race was very good for us.

Fernando, as you were saying, the first time the race has been won from that far back on the grid. Obviously your third win on home soil. Can you describe the emotion you’re feeling right now?

FA: Very good again. It’s very special winning at home. It doesn’t matter how many times you can do it, how many you repeat it, it’s always like starting from zero and you have again very emotional last laps, very long last laps because you want to finish obviously as soon as possible. Extremely happy for the team to have both cars on the podium after a difficult qualifying that maybe we were not too fast yesterday. But we knew we had the pace on the long runs and we wanted to have some clear air to exploit this potential in the car. We did it. Everything worked perfect. Happy for the team, for the fans and hopefully this is not a one-off.

Obviously you took a lot of points today out Sebastian Vettel as well. The start was clearly crucial, as was the timing of the first stop – you undercut Vettel at that point but at what stage of this grand prix did you feel you had it under control.

FA: Let’s see, after the last stop. Until that point you never know what can happen. We had more or less an easy race in terms of traffic etc but we know Kimi was on a different strategy but you never know how the tyres are going to behave. When we pit two or three laps later than Kimi and we were first, at that point.

Kimi, we heard you say on the podium there you were disappointed you didn’t win. You had a different strategy to Fernando, doing one stop less than the Ferrari today. Was there a point at which you thought you might have an opportunity to challenge Fernando for the win today?

KR: Maybe half way through. Obviously, we were leading but when we were on old tyres and he had newer tyres, it’s too easy to overtake. There’s no point to really fight against [him] because you cannot hold him behind. I knew if I could somehow stay a bit more closer, even with old tyres, maybe I have some chance, even if I’m already behind and will be with old tyres in the end but you never know. But they were just too fast. He had a good start around the outside of me. I don’t think the end result really was decided there but we just did a different way of doing the race. It wasn’t a winning way today but… We’re never happy if we’re not winning. We’re only here to try to win. But we kind of caught up with Vettel few points and obviously Fernando caught me up [by] some points but we’re still in the hunt and we’ll keep ourselves there and hopefully in the future just try to win a bit more.

Consistency is the key though, isn’t it? It’s the fourth time in five races you’ve stood on the podium, including that win in Australia and as you say you’ve got it down to just five points to Vettel. How do you feel about your championship situation and what comes from here?

KR: Obviously it’s better than before the race now. It will not be easy. We cannot fight against… it’s the same for everybody. Everybody wants to win it, but sometimes you have a bad day. You try to minimise those and make the most out of them and give yourself a chance to be up there and fight for wins. I think if you can do that often it will give a good chance in the end to fight for the championship. It’s only a five race-old season, so there’s an awful lot to be raced. We’ll see what happens. We’ll try to do well and see where we are in the end.

Felipe, your first podium of 2013. You recovered from your penalty in starting ninth to finish in third today. What does this result say about you and Ferrari this season?

Felipe MASSA: Well, I think a bit disappointed for what’s happening yesterday. These things happen many times and no penalties happen so I’m disappointed with that. I didn’t cause him any issues for him in the qualifying, so I’m disappointed for that. The race was good. Very good start; very good beginning of the race; overtaking cars; trying to be aggressive, you know and passing people, which was the case. I tried to undercut people as well, stopping before. Maybe it was a little bit early as well. Looking at the end of the race I thought I maybe had the opportunity to fight with Kimi. But I think it was a great race, we did a good job. Our car was really superb for this track. The degradation on the