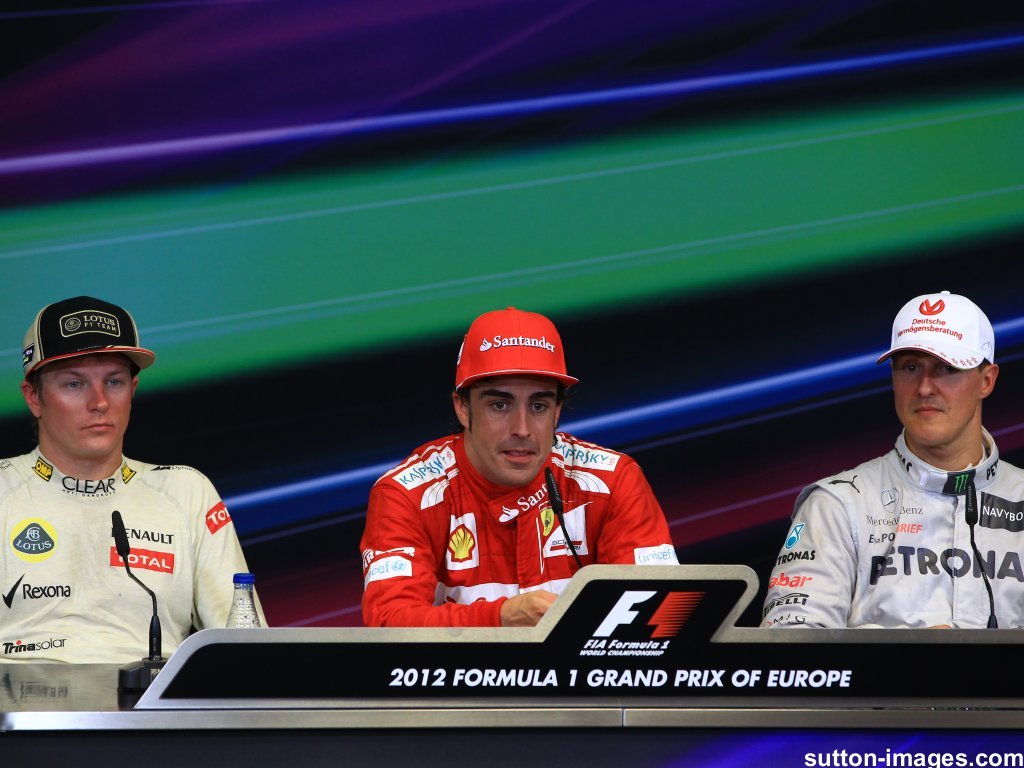 Q. Three former Ferrari world champions on the podium but Fernando this is a pretty good weekend to be a Spanish sportsman called Alonso. A fabulous victory for yourself.

Fernando ALONSO: Yeah. It’s difficult to express in words what is the feeling now. Winning a home grand prix is something unique – a very special feeling. I had the opportunity to do this in Barcelona in 2006 with Renault and I still remember that day perfectly. And now I did the same here in Valencia, with this special team, Ferrari, with all the grandstand full of red colour and Spanish flags. Here now, with the Euro football championship also, there is a lot of Spanish atmosphere inside all of us. Feeling very proud to be a Spanish sportsman at the moment and winning in Spain this race is probably the best victory I ever felt in terms of emotions. Nothing maybe compares to this one.

Q. You joined in the celebrations a little early Fernando. Why did you stop your car, just to take part in the party?

FA: No, no. We had a problem with the car and we stopped it. It was the right place maybe because we had two grandstands there. It took a little bit of time for the medical car to arrive and we had eight or 10 minutes of all the people saying things about me, saying congratulations. They want me to jump. You know, fun and games and we enjoy a little bit those minutes.

Q. Kimi, it’s a third podium position of the season for you. Was a victory possible for you today or were the tyres just not there at the end?

Kimi RAIKKONEN: I think everybody had quite old tyres at that point. I just didn’t have enough tyres. I had enough tyres to get past Hamilton on I think it was the second-last or third-last lap. We didn’t really have the speed to challenge for the win. I think on the start already I got a good start but got blocked by Maldonado in the first right-hander and lost quite a few places because of that. I was a bit behind already at that point. We made a good recovery from that position. I had quite a hard fight with people and overtaking and then second place. It’s OK of course, but not what we wanted.

Q. Michael, they say you can’t overtake on this track but your saw your fair share today. Welcome back to the podium. At what stage did you think this podium was a possibility?

Michael SCHUMACHER: I didn’t actually think about a podium at all at the end of the race. It was crossing the line that I asked my guys ‘where did we finish?’ I saw Webber’s pit board and close to the end it showed him eighth and seventh and I knew I was one place ahead of that one. And then boys told me ‘that’s third, that’s podium’. I can’t believe that! It’s something I didn’t really expect. You sort of lose count, because I was pretty busy in the last stages of the race, plus Maldonado and Hamilton had their issue. Probably normally one minus one would give us the three but I lose count at that stage.

Q. It’s moments like these that brought you back to the sport I’m sure.

MS: Yeah, it’s those moments that definitely you enjoy deeply. It’s just a wonderful feeling to back after such a long time. We were a couple of times close to it. It happened in a pretty spectacular way on a track where it is difficult to pass but due to various strategies and differences on track it was pretty exciting and that’s obviously the best way, if you manage the way I did today to jump the podium unexpectedly makes you extra happy.

Q. Finally, back to you Fernando. You described this as your best victory. After the disappointment of qualifying to the euphoria or today. How do you explain that, or is it just Formula One in 2012?

FA: That’s Formula One. That’s the best thing we can say. It’s unpredictable. Good results. Still a sport. Sport is about that. Sport is about the ups and downs. Yesterday, we had a tough moment. We were said not being in Q3. But you can never give up because anything can happen in sport in general and maybe more in Formula One. There are many factors inside, there are the cars, brakes, engines – anything can have a failure in the race. There are a lot of things we need to take care: the strategies, the start, the overtaking, manoeuvres. When you put all of these in one thing you have a Formula One grand prix. Today, we had an amazing race, amazing start, some good fights, I think I remember six or seven overtakings where it was very close, we touched each other. I touched Grosjean in the restart. All of those little moments can go on the wrong side and you finish the race in the wall, or you can be the winner at the end. And today, we had all the good factors with us and the luck and we have to enjoy this.

Q. Fernando, well done. Tell us about the pleasure of winning here at home in Spain.

FA: I don’t know what to say really. It’s an amazing feeling. As I said in the other press conference I still can remember Barcelona in 2006, now, so years after the win. So probably I will have better and better memories of today with time. Right now, it’s just too many things on my feelings and too many thanks to give to all the team, all the fans, all the support that I felt all weekend. Especially yesterday after the qualifying, you never think that you can do a good result or that you can fight for the podium or something like that. When you find yourself third in the race after the safety car, I said: ‘hopefully there is the chequered flag now and I enjoy this podium celebration.’ Two laps later I overtake Grosjean on the restart and you think again ‘hopefully the race finishes now’. Then Vettel stopped and it was a very long race until the end and, yeah, I enjoyed so much this moment. But as I said, difficult to out in words what I’m feeling.

Q. Were you worried that the tyres were going to drop off at the end just as they did in Canada?

FA: No, they did. I was not worried. They did. They did, about eight laps from the end. I said to the team ‘the tyres are finished, we need to do something’. They said: ‘wait one more sector because they are not quicker than you at this moment’. The next sector they were the same as me. So they said: ‘wait one more lap to see how much quicker they are’ and the next lap they were the same time as us. Wait another lap and wait another and then it was three laps from the end and they were in the same lap times and we went until the end. But the tyres were as finished as in Canada but it was for everybody this time.

Q. You mentioned a problem with the car at the end. Was that something that was also affecting the closing laps?

FA: No, I don’t think so. The car felt OK and then on the in-lap