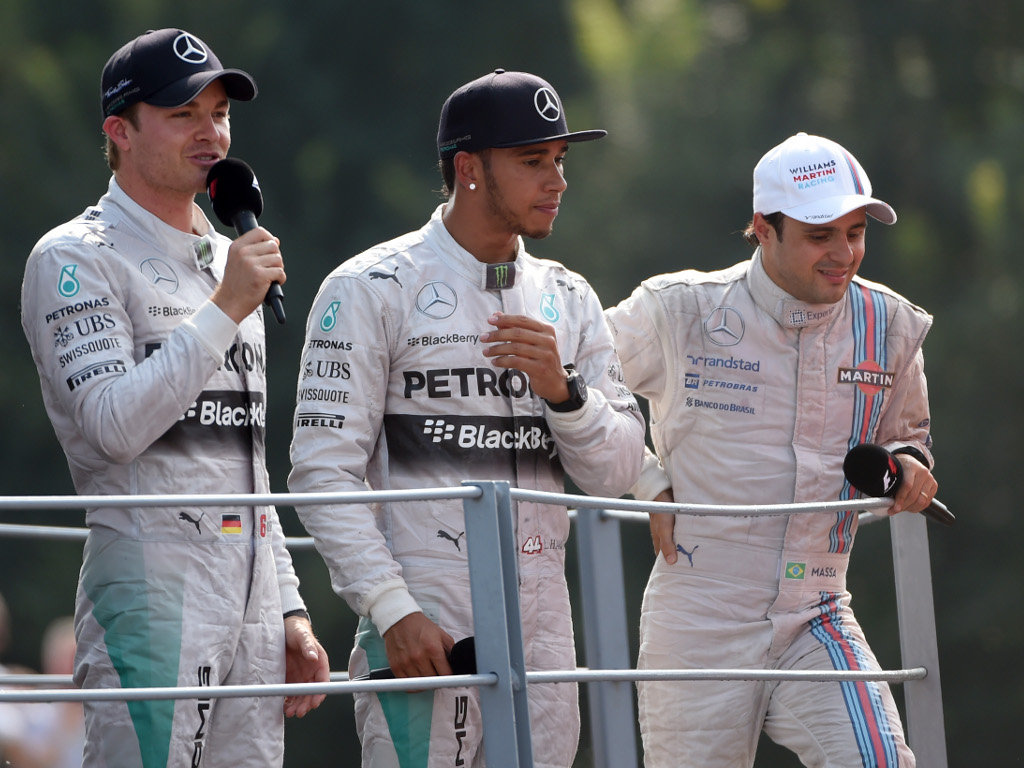 Lewis HAMILTON: What a great crowd we have here. This is amazing to see. The whole finish line straight is completely filled with fans. You guys make this race, so thank you so much for the support.

Q: Nico, I spoke with our friends from Monza, they said: “maybe for Nico we change Turn One.” Can you tell us what happened in Turn One?

Nico ROSBERG: It was a pity. It didn’t work out today but Lewis drove a great race and he deserves it. So it’s OK.

Q: Lewis and Nico, I have to speak but I cannot speak very loud because it’s a secret. Are you friends again?

LH: Of course, we are team-mates and we always will be so…

Q: Felipe, you have made you first podium [this season] but it’s a place you know very well, Monza, so you have to say something in English as well.

FM: Yeah, sure. I’m quite happy for the first podium of the season. I was not very lucky in some of the races, but the luck is on our side I’m sure now, from now to the last race we’re going to be there fighting, so I’m so happy to be on the podium here and there’s a lot more to come. So thank you very much and you are the best. Beautiful, you are the best.

Q: Lewis, many congratulations, another victory here in Italy; the first time in your Formula One career, I believe, that you’ve won six races in a single season, so a positively good omen there for you I’m sure. In the second stint… obviously the start wasn’t great and I’m sure you’ll touch on that, but also at the beginning of the second stint your engineer suggested to you that you might like to drop back 2-2.5s behind Nico and maybe attack him at the end, but you didn’t do that. You put the pressure on him and obviously ultimately he went straight on at Turn One and you took the lead. Give us your mindset at winning the race, the start, and that phase there.

LH: Well, first of all, a big congratulations to the team. They said that they would want a one-two and they got it today. It was a difficult race. For whatever reason… at the start there’s a button that you press which engages the launch sequence and for the formation lap it didn’t work. I thought “no problem, I’ll just put it on for the race” and then when I got to the grid I put it on and again it didn’t work. It’s very, very strange, I’ve never really had that happen before. There was a different sequence of lights that were on, that were unusually… that weren’t on ever before. Anyway, I tried to pull away as fast as possible. The RPM was all over the place and fortunately I managed to not lose too many places. We never practice a start like that where you don’t have the launch sequence in; we always practice in a launch sequence to optimise it. So I had no idea really what I was supposed to do, so I just floored it and hoped for the best. Then after that I had a good battle with Felipe, obviously. That was very fair through the corner. Then the engineer said that I should stay back, but knowing from experiences and also particularly this year I knew that that wasn’t the way forward, so I chose another route.

Q: Can you say a bit more about that?

LH: The car felt good and it was the closest I had been at that point and just really during the previous stint I knew when I was behind others, when I was behind Nico, when I got closer to him on the older tyres it was very hard to stay with him. So I knew that the only chance would be at the start and so I took it.

Q: Nico, you got a perfect getaway, you were leading in the first stint, but obviously the talking point regarding you is the two straight on moments into Turn One. One I think on lap nine and then obviously the decisive one, which led to Lewis taking the lead. Was it your mistake? What can you tell us about it?

NR: No, it wasn’t my mistake, it was the other guys’ fault… I’m just kidding! It was just Lewis was quick, coming from behind. I needed to up my pace and then as a result just went into the mistake. That was very bad and that lost me the lead in the end. Definitely very disappointing from that point of view. But then at the end of the day, also, first of all it’s a great day for the team, because after the recent difficulties it’s the first one-two for the team in a long time, I believe, if I’m not mistaken. And so that’s back to where we need to be, so that’s awesome. And then for me: of course I’m disappointed now right afterwards but in the end of it, still second place, still a lot of points, so it’s not a complete disaster.

Q: I think it’s the first one-two since Austria.

NR: Yeah, so that’s great. And the team deserves that, to put all the recent things behind us now and move forward.

Q: Very well done. Felipe, congratulations on another podium here in Italy and an important one – your first one for Williams and more importantly it takes you ahead of Ferrari now. Williams are third in the Constructors’ Championship.

FM: Yeah, definitely. It’s a great day for us. It was a great race, a great start. Also the pace, I think, was very good. So, not enough to fight with Mercedes but I think we had a very good pace, a very good car. The team did a perfect job. I’m really, really happy to be on the podium today. We missed a little bit during the season to be on the podium but so it’s special to be on the podium here in front of these amazing people. Also, a very positive result for us that we passed Ferrari here as well, which is very important for us, very good for us, so I think it’s amazing to see how Williams were last year and we are fighting with big teams. Definitely it’s really good for the whole team and we will keep fighting until the last race and I hope really we can get this third place in the Constructors’ Championship. It would be fantastic for the whole team. I’m so happy to be on the podium here in this amazing place that I really love.QUESTIONS FROM THE FLOOR

Q: (Frederic Ferret – L’Equipe) Question for Lewis and Nico. When you put Nico under pressure, were you expecting a mistake of Nico? Where you trying to get close and overtake him? Question to Nico, can you tell us more about the difficulty of braking at the first chicane?

LH: I was pushing to overtake him. That meant it opens up doors for everything. So, I mean… I don’t really know what to say.

NR: Monza, yeah, it’s one of the most difficult tracks for braking because of low downforce and the highest speed of the year. That isn’t any excuse or anything, that’s just the way it is. It is one of the challenges, y’know, of this weekend here. Unfortunately I got it wrong. Two times in the race.