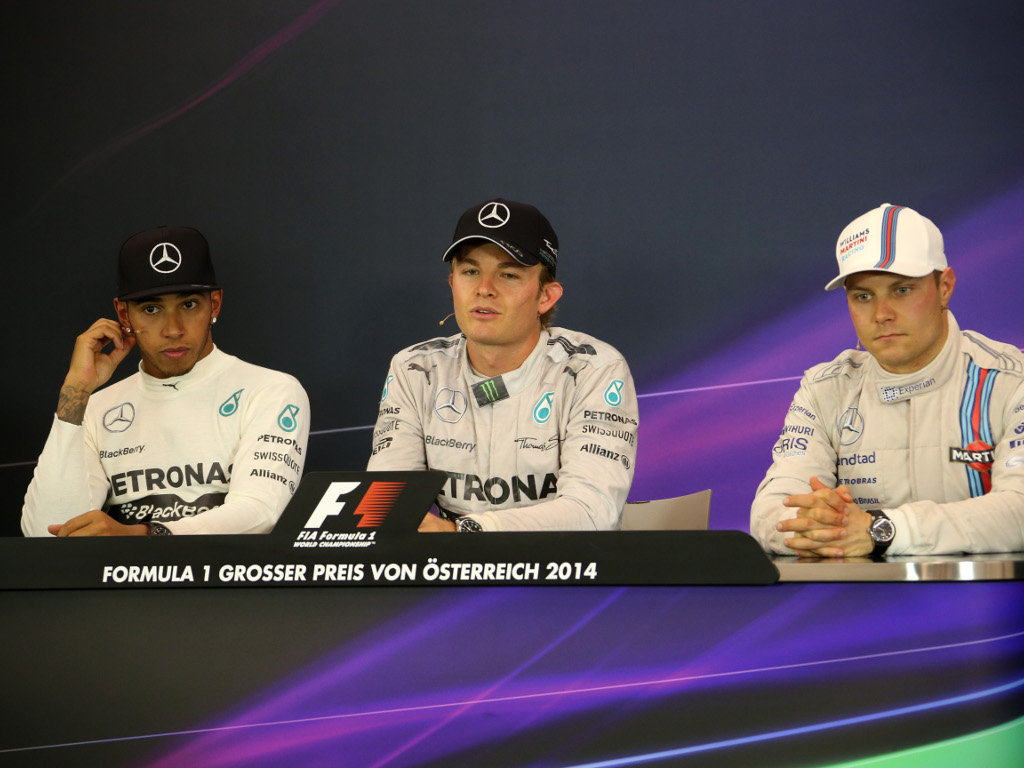 Q: Another dominant one-two victory for Mercedes, so Nico what a very, very special for you again. Three now in the season. You capitalised on a very, very good qualifying and now another victory. Run us through it. Lot of control on the brakes by the sound of it, managing issues at the end there?
Nico Rosberg: Yeah, it wasn’t the easiest of races – trying to manage certain things that were a bit on the limit on the car. But in the end I had a very, very fast car again, so it was fantastic to win today. It’s great also to get a one-two here in Austria and it’s great to come back here to Austria. I mean Austria for sure deserves a race. The fans have been amazing, the atmosphere has been spectacular this weekend, so thank you very much for that and yeah it’s been awesome.

Q: Lewis, over to you mate. Well done. A good recovery after a tough qualifying. In terms of… mega first lap, right on Nico at the start there after the first lap. In terms of pit stops, are you happy with your positioning because I’m a bit worried about how much time you’re losing in the pits. The guys… good stops for Nico but are you happy with the positioning on that? Also at the end of the race did you have to manage any issues and could you fight Nico?
Lewis Hamilton: I don’t know. I have to have a look at the feedback and just see what the team say about the stops. Maybe my positioning is not right, you know obviously in those situations you’re just pushing. But the guys have done a fantastic job. As Nico said, to get another one-two here is just incredible. This track has been fantastic and the fans have been insane this weekend, so thank you all for the support.

Q: Congratulations Valtteri – first podium. It’s an incredible feeling up here isn’t it? Run us through the race. Obviously starting on the front row. Obviously these guys have a lot of big experience on the big occasions to close a race out but you really drove a clean race. Run us through it, are you happy with it?
Valtteri Bottas: Thanks Mark. Really, really happy. Difficult to put into words really. Just really thankful to the team for giving me this car. It’s been a long way for us since last year, I mean, and many, many years at Williams and now it’s so much better. The race was exactly what we needed at this point – clean, nice, everything went like planned really. The car was good for the podium this time and I’m just so happy.

Q: Well done, and big points for Williams, which is fantastic. Final one for you Nico. A 29-point lead, off to Silverstone, a track that you know well; a track that I tried to catch you on in the last few laps last year but you’ve had a couple of good wins there and you’re very strong at Silverstone, Lewis’ home track, so the battle continues. Looking forward to that race; home race obviously for Mercedes as well. So how’s the feeling for that one?
NR: Yeah, for sure, looking forward to the next one; home race, so it would be awesome to do another one-two there, that would be great to give something back to all of our colleagues back in the factory. So I’m looking forward to that.

Q: Nico, congratulations, Mercedes sixth one-two finish of this season, your third victory and you’ve now extended your championship lead, as we’ve heard, to 29 points. Clearly strategy was an important part of the story today – but did the race turn out as you had expected it to when you were sitting on the grid?
NR: To be honest yes it did. Pretty much exactly like we were trying to make it work. OK, I thought I would get Valtteri at the start and I did – but then they’re quick on the straights and he just went flying straight by me again, which was not good. But I knew pre-race that even if I am third after the start, the chances are still very good to make it and win the race because we have just a little bit more pace and less tyre degradation than the Williams – we expected to have less at least – so we could go aggressive on the stops and that’s what we did and it really worked out well and so I’m, yeah, extremely happy with that result. Also, great to extend the championship lead, which was really my goal coming into Austria.

Q: Lewis, obviously the platform for your result today was that stunning start, off the grid from ninth into fifth on that opening lap. Tell us about that and then also about how you made your way through the field. Clearly that second round of stops was important for getting in front of Valtteri.
LH: Yep, it was a good start. We’ve been working very hard on our starts throughout the year and the team have done a great job to help out with that, and yeah, so I got one of the best starts I’ve ever had really and positioned the car in the correct places. It would have been great if I’d started where perhaps I should have started this weekend – but damage limitation. To get from ninth to second and be pressuring Nico at the end of the race really shows the pace that I had this weekend.

Q: Valtteri, your best-ever grand prix finish to follow up your best-ever qualifying performance yesterday – you’re starting to really make your mark on the sport. I guess the decisive moment for you was the first round of stops with Felipe and getting ahead.
VB: Yeah, I think overall the best-ever weekend. So, really happy. Really happy for us as a team. We were really strong the whole weekend and that’s down to all the hard work. Of course it was a good track for us. You never know what’s going to happen in the next race but overall we are making progress. Step-by-step we are getting there, getting closer to the positions where we belong. I’m really happy. The race today: it was really nice to have a really nice, clean race. Good points for the team. We’ve had some issues lately, been a lot of talk, not maximising car we had but I think today we showed what we can do.

Q: (Frederic Ferret – L’Equipe) Question for Nico and Lewis: can you tell us more about the final five laps, about the chance to overtake Nico for Lewis and the chance to finish first for Nico?
NR: Well, I generally felt comfortable in the last few laps. I thought that I could keep a nice gap and just on the last lap my tyres dropped away a little bit but as soon as they got past the first couple of hairpins, I knew that I was going to be fine so it wasn’t as close as maybe some other races have been recently.
LH: There wasn’t an opportunity to overtake.