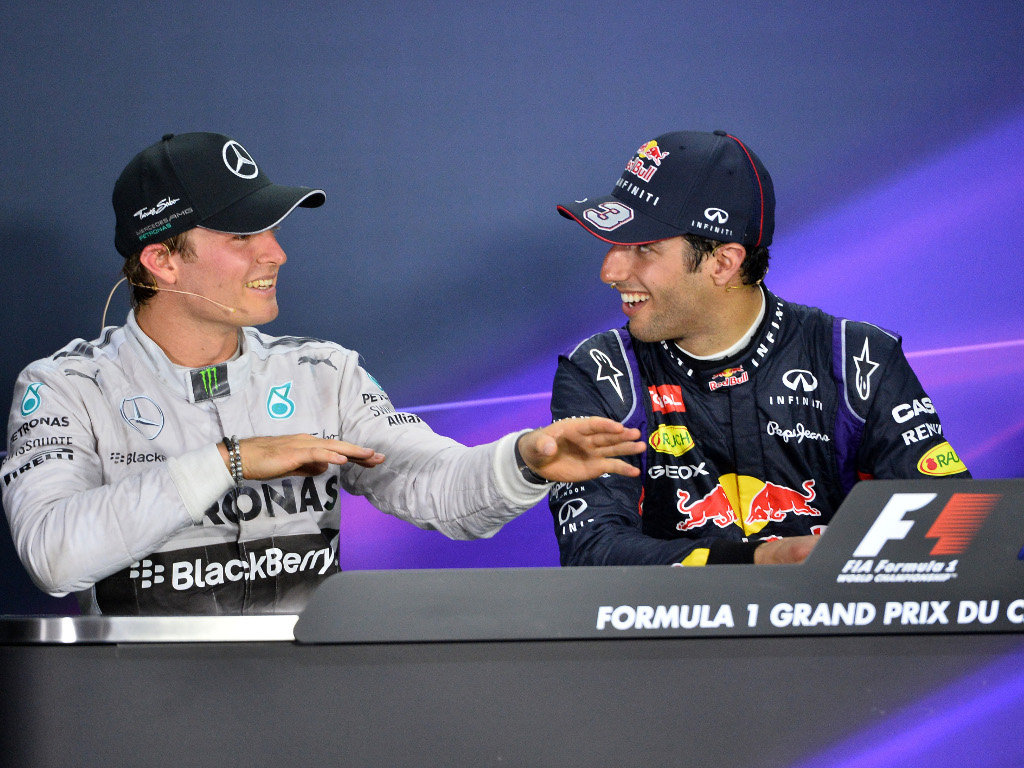 Q: Daniel, what a race. I’ve been really suffering in the last laps with you. Tell us about this first win.
Daniel Ricciardo: Yeah, I’m still a bit in shock. Thanks everyone. This is ridiculous! Lots of Aussie flags, that’s nice. The race really came to life in the last 15 to 20 laps. We saw Hamilton had a problem and then we saw Rosberg was slow on the straights. I was really struggling to get past Perez. They had a pretty good car on the straights and he was holding me off well in the corners. We finally got a run out of the last chicane and made a nice move into turn and then set my sights on Nico and then a couple of laps to go just found myself in the right spot to get the DRS. It’s just an amazing feeling right now, I’m really grateful for this. Thanks everyone.

Q: Nico, at the start and the beginning of the race it looked like you really had the speed and then you were fighting a lot with your team-mate. Tell us about the beginning.
Nico Rosberg: Yeah it was a big battle all the way. Already on the start I didn’t have the best getaway but I got better through turn one, so I managed to keep the lead through turn one and from then on it was a big battle all the way through. Managed to stay ahead until the second pit stop and we had a problem in the pit stop and I think that’s the main thing. I dropped behind as a result. From then on I didn’t really know what was going on because I lost a lot of power so very slow down the straights, so just trying to hang on, trying to put qualifying laps all the time but it didn’t quite work out against Ricciardo, against Daniel.

Q: Sebastian, when Mark Webber left you had such a nice guy coming in your team. What did you think?
Sebastian Vettel: Well, he’s still a nice guy! Congratulations to him, first of all, it’s his day. Obviously, as he touched on, the race really came alive towards the end, it came to us. Obviously a big help from Mercedes this weekend, unlike all the other weekends, but we were there to capitalise. It was difficult for us all the time, being stuck behind the Force Indias. First I was stuck behind Nico Hulkenberg and Daniel was stuck behind Perez. We were just not quick enough down the straights. We just lacked power. It obviously didn’t help our strategy. Still, it’s a very positive day, Daniel’s first win here, a first win for Renault in this new era of engines. They had a very good comeback but as we saw there is still plenty of work ahead of us as the Mercedes were quite a bit quicker than us down the straights but all in all a very good day and once again congrats to Daniel.

Q: Daniel, now we go to a new track. It’s going to be let’s say your home track, so what do you expect on this new circuit and are you happy?
DR: Yeah, very excited for the next race, it’s going to be a home race for Red Bull and if Seb and I can stand on the podium again I think it will be awesome. It’ll be great, they’ve done a lot of work there at the track. I think the facilities are going to be awesome. Yeah, it’s just a couple of weeks away and I’m sure it’s going to be a great weekend.

Q: Daniel you started and you’ve just joined a very exclusive club of men who’ve won a Formula One grand prix. How does that feel?
DR: Yeah, really nice. It’s still a bit surreal but yeah, just realty cool. It’s not that we were leading the whole race, so it’s not that I had time to understand that I was going to win, it all happened in the last few laps, so I think that’s why it’s still taking a while to comprehend in my head. But really nice, a really good feeling. The race came to life at the end. Mercedes had their issues and it enable us to close on them. We had a good fight with Perez and we were really struggling to pass them. They had, as we know, a really strong car down the straight and it was doing a good job through the corners as well to keep me behind. But then out of the last chicane I got a really good run on him and made the move stick in turns one and two. I was close to overshooting it, dropped a couple of wheels in the grass but it was fine and then Nico in the closing stages. Really, really nice. I wasn’t sure if the two drivers on the last lap were OK, so I just wanted to make sure they were cool before we got celebrating, but I believe they’re fine so really, really happy with the result.

Q: Very, very well done. Nico, as Daniel was just saying, Mercedes had some issues today. Your team-mate retired, so you’ve extended your championship lead to, I believe, 22 points. But you had quite a bit to deal with judging by the way your pace dropped off very suddenly; brake issues we heard, also managing fuel. How hard was that for you?
NR: What happened was that I lost the ERS and when you lose ERS then it doesn’t harvest anymore and then all the braking on the rear is being done by the brakes and then the rear brakes overheated. So it was one problem and then the next problem happened. That just made it massively difficult. I needed to cool the brakes a lot, I lost a lot of power on the straights. At the same time, taking those things into consideration, I was just pushing flat out, qualifying laps, one after another and managing to stay ahead of that pack behind me until two laps from the end. From that point of view it was a very good result and lots of points. Congratulations of course also to Daniel. Fantastic to get the first win. That’s great for him. Not great for me but anyways! We need to keep pushing of course; some reliability problems and we need to make sure that we’re bulletproof.

Q: Sebastian, you said on the radio that you wanted to try something on the strategy. You were getting a bit frustrated, not surprisingly, behind the Force Indias. Tell us about that and also your view of the accident at the end. We’ve just replayed it here and they missed you by 1.5 metres maybe.
SV: Yeah, as I said obviously from lap 20 onwards probably, I don’t know, after the first stop, a couple of laps to go until I caught Nico, the first Force India, basically my race was over. I couldn’t get past. As we saw, until the end there was no way to get past for us down the straights. The Mercedes-powered cars were just too quick. Equally we were in trouble defending to the Williams behind. Basically I was asking to do something with strategy, which I think was possible. On the pit wall they have a much better overview but in my case they didn’t really help me to create something different and to use the pace we clearly had. So in the end I pitted and also lost a position to Daniel. At the very end I was lucky to capitalise on Perez’s brake problems, which allowed me to be much closer down the straights and finally make a move stick. But I think you could see even with DRS open and hi, DRS closed, as soon as I pulled out of the tow he was actually gaining down the straights so… It’s what we’re fighting but I got past him and then into turn one I saw they were very close to each other and I saw something white coming in the mirror and at the last second I reacted and opened the car, basically turned right and Felipe was in the air flying past. Kind of surreal but quite lucky that he didn’t hit me in that instance and I saw him just in time.

QUESTIONS FROM THE FLOORQ: (Mike Doodson – Auto Action) You mentioned the mistake that P