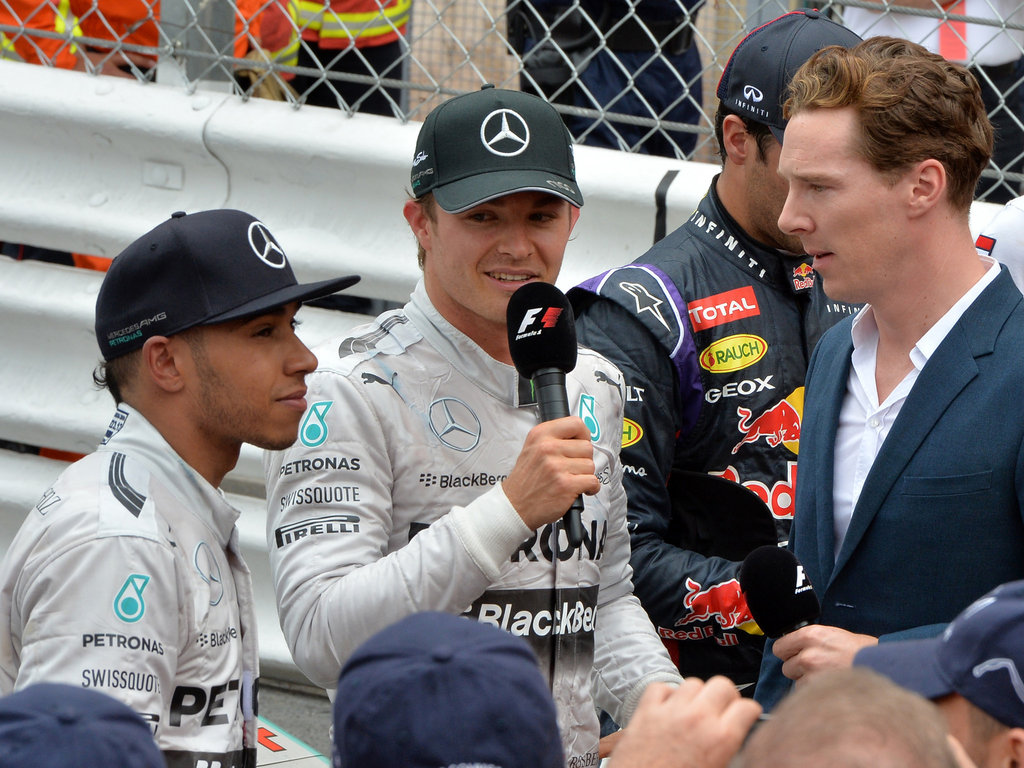 Q: Nico, congratulations, man – a home win for the home boy. How did it feel? You had Lewis very, very close to you all the race but you held on to your lead. How was it?
Nico Rosberg: A very, very special day for sure. Lewis drove really, really well and pushed me massively hard, so the pressure was on all the way. But I kept it cool and, yeah, was able to win, in the end pulling a bit of a gap because I had the fresher tyres. So, fantastic and I’m very, very happy for the whole team, it’s an amazing car they’ve built and given us this year.

Q: Congratulations, well done to the Monaco boy. Lewis, how are you? Tell us a little bit about what happened on the 56th lap? You got something in your eye?
Lewis Hamilton: Yeah, just through the visor… but anyway that’s not important. It was a good day and really good for the team to get a one-two.

Q: You had [Daniel Ricciardo] right close behind. How was it? You started second and finished second… How are things with your team mate, I think people want to know?
LH: I had great pace, you know, obviously I felt I was very strong today but it’s a very, very difficult circuit to overtake on…

Q: It’s incredibly thrilling to watch, you were all incredible out there, the closeness of the cars…
LH: Thank you. Fortunately we didn’t make any mistakes, so….

Q: It’s your first podium here isn’t it? Congratulations.
DR: Yeah, thank you. The start was not great, I dropped back to fifth actually. A bit of frustration but then we saw Vettel had a problem, so we were able to get fourth and then we saw Raikkonen had a puncture on one of the safety cars. So we sort of inherited third after a poor start…

Q: You got very close to Lewis. You were right on his gearbox at the end?
DR: At the end we really closed in. I believe he had an issue. We tried to put some pressure on but in the end third was the best we could do.

Q: Congratulations Nico – a two-time Monaco Grand Prix winner, only a handful of drivers have ever done that before. Fifth consecutive one-two finish for the Mercedes team and you are back on top of the Drivers’ standings. Can you sum up what this win means for you today in the context of the battle with Lewis for the championship?
NR: Yeah, it’s a special win, definitely, because Lewis has had the momentum with the results and everything and I really needed to try to break that momentum and somewhat I managed to do that this weekend. Of course taking the leading again in the world championship and winning here in Monaco, yeah, all in all really, really cool.

Q: Well done. Lewis, obviously the momentum is broken for the moment. We heard you on the radio quite a lot after the safety car and the pit stops, questioning and speaking about the strategy calls. Obviously you pitted together under the safety car. Had there been a thought that you might try to undercut Nico before that? Can you explain to us what the conversation was about?
LH: I don’t remember to be honest. I don’t. I think they saw a crash and normally under the crash we could have come in and I really should have come in but the team didn’t call us in. We really should have pitted that lap.

Q: Fair enough. Daniel, your first Monaco podium. Can you describe your feelings about that and looking back across qualifying and the race is there any way you could have got a better result than the one you got today.
DR: To describe the feeling, it’s really nice to be up here. Could we have done better? I don’t know. I felt yesterday that we left a little bit of lap time on there. Where that would have jumped on the grid, who knows. After that, the race itself – the start was not good, not what I wanted. I actually dropped back to fifth and then Seb had his problems, still not sure what, but pretty evident he had problems when he slowed on the straight. Then Raikkonen I saw got a puncture under the safety car, so I got third and then pretty much was just trying to maintain the gap behind me to Alonso. Then when I thought there was enough or the right amount of laps left before the end to push and not really save tyres anymore, I did and went for it. We got close to at least one of the Mercedes at the end but you know what it’s like around here, it’s quite hard to pass. Tried to put a bit of pressure on but third was the best we could do but not a bad day.QUESTIONS FROM THE FLOOR

Q: (Paolo Ianieri – La Gazzetta dello sport) A question for Nico and Lewis. We have seen that there is a pretty tense situation between the two of you and we also heard comments from Lauda saying you did not want to talk and apologise. Are you going to have a pizza together, a dinner, to sort the problems, talk about it and try to get the situation back to normal.
NR: It’s fine. We’ve had discussions and the benefit we have is that we’ve known each other for so long. We always sit down and discuss it and then move on and that’s what we’re doing this weekend also.
Lewis?
LH: I don’t really have an answer for you there.

Q: (Oana Popoiu – F1 Zone) I have a question for Lewis. Niki Lauda said that in Barcelona you used an engine mode you were told not to and you had to apologise to Nico for that. Do you think that that mode would have helped you win the race today?
LH: No… today we were using all the modes. In the last race it was a mode that didn’t really affect the outcome of the race. We were told that we had to stay in a certain mode. Nico did it in Bahrain and I did it in Barcelona. In this race we stuck to the strategies we had to stick.
NR: I don’t know what Niki is referring to but it’s completely normal that we switch modes together you know, we always do that in the races. It’s nothing unusual.

Q: (Dan Knutson – Auto Action and National Speedsport News) Lewis, yesterday you told the BBC that you might handle the situation with Nico like Senna would. What did you mean by that?
LH: I don’t know. I can’t really remember to be honest. I think it was just a joke. Obviously I didn’t.

Q: (Michael Schmidt – Auto Motor und Sport) I think you said on the radio that you had a problem with your eye in the closing stages. What happened there?
LH: I’ve never really had it before. I kept making sure my visor was as closed as possible but I had quite a bit of wind coming in. I got close to Nico at one stage and all of a sudden I got a bit of debris in my eye, or some dirt, so I was driving with one eye, which is virtually impossible to do and so through the low-speed corners I was trying to open up my visor to clear it up but it was just making it worse. Fortunately, I think with five laps to go it cleared up so I was able to stay ahead of Daniel.

Q: (Vincent Marre – Sports Zeitung) In the last days Nico was mentioning that the previous races were not one-to-one races. What do you think Lewis about this race or this race weekend. Was it a one-to-one races.
LH: I don’t fully understand the question.

Q: (Vincent Marre – Sports Zeitung) Last day Nico Rosberg was mentioning that the previous races were not one-to-one races, relating to the weather, because you were winning the races and this time he’s winning the race and I want to know if you think this weekend is a one-to-one race for you?
LH: I’m still not fully understanding it, but all the races have been very, very close but this weekend I think I had very good pace. I drove with all my heart and gave it all I could, fairly, and I feel like I drove fairly all weekend. So I leave today quite happy and I can go into the next race with even more energy and determination.

Q: (Ian Parkes – Press Association) Lewis, it seems pretty clear to us that you feel aggrieved with the events that occurred yesterday in qualifying. Is this it now for you? Is it gloves off in your battle with Nico? And secondly, do you feel that you are getting full and fair support from the team?
LH: Generally, there is a fierce battle between me and Nico and it will continue that way to I’m sure quite late in the season. Nico’s not had a single hiccup through the season so far. Obviously I had a car that didn’t finish in Melbourne but otherwise it’s still quite close, so I’m just going to keep my head up, keep pushing. I know the team are working hard for the both of us. The team can sometimes be in awkward positions, which they were yesterday, and their job is really to protect us both and that’s what they did.

Q: (Graham Harris – Motorsport Monday) Question for Nico: you were being told to back-off and coast with fuel. How critical was your fuel?
NR: Yeah, the fuel was very critical and caught me off-guard a little bit because it was a major change that I had to make and especially with Lewis being so close behind, it was a tough moment because I had to change the driving style completely, use different gears, different lifting and coasting, everything different. But, again, the team managed that well and got me to do what I needed to do. And then, once I got into the groove again, it was OK and everything… it was no problem them. But it was still difficult.