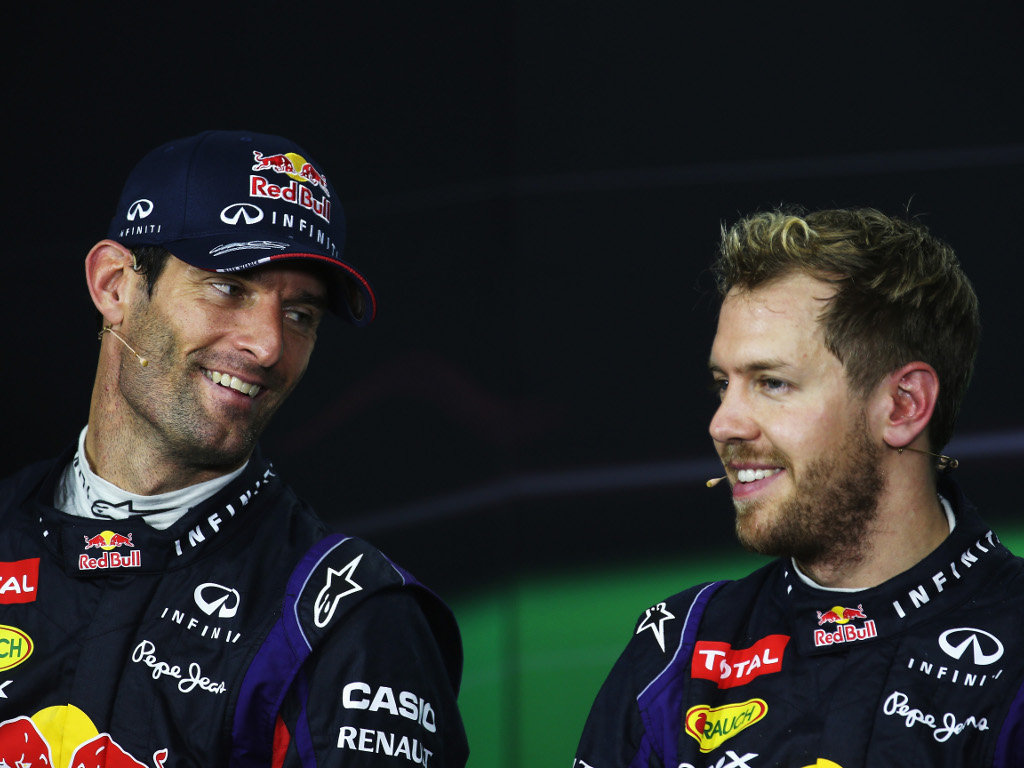 Sebastian VETTEL: No, please start with him. Start with Mark.

Q: OK! Mark Webber, that’s your last race in Formula One, today is a very emotional day for you. You have over 200 races in your career.

Mark WEBBER: Yeah, it was a very good finish to my career, a good fight with all the guys I’ve enjoyed fighting with for most of my career: Seb, Fernando, Lewis, Nico, all the guys who have been in the window for the last five or six years. I want to thank the team, I enjoyed the last few laps. It was a very nice way to finish. I want to thank everyone in Australia. I wouldn’t be here where I am without the support in the early days. It’s been a thoroughly enjoyable career. A great journey, one of which I’m proud of, and there’s been so many people who have played a special role in my career. They know who they all are – thank you very much if you are watching and…yeah… enjoy watching Formula One next year with these guys, but off to Porsche and looking forward to it.

Q: Sebastian, so, you just made [equalled] two records, the most consecutive wins – nine – and the highest number of wins in a single season: 13. So, what do you feel?

Sebastian VETTEL: Well, I’m actually quite sad that this season comes to an end. I think the last couple of races, really since the summer break, to win every race is unbelievable. The car has been phenomenal. Just kept getting better. I think today was a very interesting race. I had a poor start but then I was able to come back straight away in the first lap, build a gap which was nice to control then. But in the pitstop, obviously, I was waiting for my tyres again. I think it was a bit of a confusion going on because we had both cars coming in at the same time. Fortunately I got all the tyres in time ready to go. Mark was behind and then, yeah, the last laps, very difficult with the rain because you could see the fog is coming, [then] it’s leaving, so it was very difficult to judge but yeah, for sure, extremely proud. Big, big thank you to the team, big thanks to Renault. I think there’s a couple of guys that stand out. First of all Mark, obviously it’s his last race, we’ve been team-mates for a very, very long time. After all we didn’t have the best relationship but I think we always had tremendous respect for each other. And together I think we’ve been very, very successful for the team. And then there’s one other guy, he’s working on my car. His name is Tom Batch and unfortunately he’s leaving so farewell Tom, all the best for the future, and who knows, maybe we’ll meet each other again in the future.

Q: Fernando, since Singapore this was your first podium. Now the season is over and today was a tough race because like he said, the rain came and gone, came and gone. A light rain all the time. So how was it there?

Fernando ALONSO: Well it was a difficult race for everyone, unfortunately the rain didn’t come: I think we were more competitive in wet conditions but again, it seems as if it’s going to rain in any moment but it didn’t, so it was a shame for us but at least we’re in the podium, so ending the season on a high and hopefully for next year we start with a completely new direction and a positive trend. I’m looking forward.

FA: It was a shame, sad that he had this drive-through because I think the podium was very close for Felipe today. When I saw him fourth I said this would be a very good celebration for him. Sad for this race but happy for the last four years: he has been an amazing team-mate – inside the circuit with very competitive skills and also like a person. We build a friendly relationship in the last four years, a lot of time together. We’ll see him in the paddock next year with different colours but always he will remain a very good man.

Q: Sebastian, lots of things really to talk to you about but just tell us about the race – give us some idea. Bit of a voyage into the unknown for all three of you in terms of tyres as well but also the start, the pitstop…

SV: Yeah, obviously we didn’t have any dry running, which was quite exciting when we started: bit of an adventure to find braking points, etcetera. Start was obviously quite bad for me. I had lots of wheel-slip and didn’t get the initial launch off the line as good as I was hoping for. Nico passed me straight away, Fernando was closing in. I was lucky that as soon as I got on the KERS I could recover a little bit and then it’s not a long way to Turn One – which helped today. So, lost the position, saved some KERS for the end of the lap. Was hoping to get him back up the hill which worked well, so I managed to get back in the lead straight away and was basically benefitting I think from Nico probably a little bit slower than the cars behind – Fernando and Mark – so I could open a gap and control that for more or less the rest of the race – until we came in for the second stop, which was a last minute call. I think we were afraid of a safety car at that stage. I came in, hoping everybody was ready. I think I had three wheels on the car but I was waiting for the front right. For some reason, last year and this year, it seemed to be the front right that… yeah, they let me wait for a little bit. I saw that obviously Mark was queuing behind me and I wanted to go and there was a bit of chaos in the pitlane but it was obviously fine to get the right tyres in the end, get out again and I still had a bit of a gap. We obviously lost to Fernando at that stage, both of us, but was still able to have a little bit of a gap and control that until the end which was very helpful to get through traffic and with the rain coming in and going – you could really see it from the car. The fog was coming and the rain clouds. You didn’t know how strong the rain was and, yeah, in the end it was fine all the time to stay on dries but a little harder rain and it could have been a different story so, yeah, lucky to get away with that.

Q: Mark, a great end to your Formula One career. I hope you’re happy with it as well. How did it go?

MW: Yeah, I was happy with today. Tricky grand prix for all of us as you say, straight into dry conditions for a Sunday afternoon race. Maybe it’s what Bernie should do! He should just have Sunday afternoons mate, just turn up for Sundays and just race from there because it was a pretty good start to the grand prix, I think, all of us getting into the groove with no dry running: challenging for the teams and the drivers. So we all got there in the end. Both Seb and I had