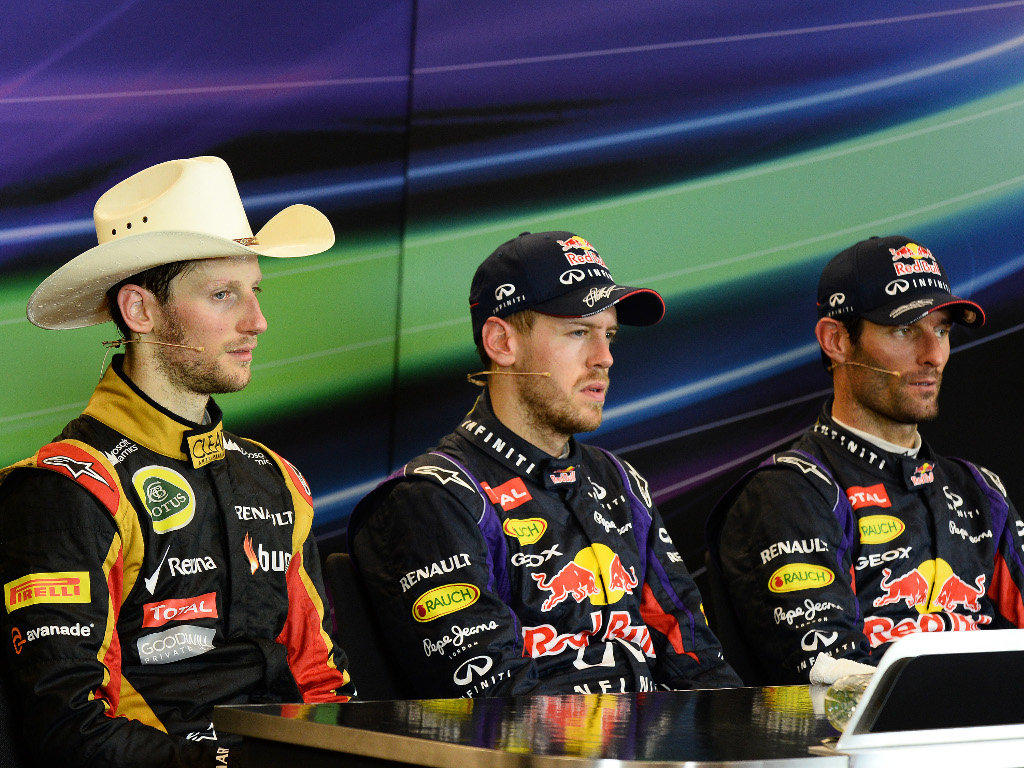 Q. Sebastian, I’m still out of breath. How in the world do you do it: eight straight, I mean you’re rewriting the record books. Tell us about it. Second last year, top podium step this year. Tell us.

Sebastian VETTEL: I don’t know, honestly! It’s impossible to know what to say. First of all, I would like to say thanks to the crowd. It’s unbelievable. It’s only our second race here. Second race here and we’ve got more than 100,000 people coming on Sunday. I think this is one of the best races we have all season. The whole city is going crazy, so it’s phenomenal to race here in front of the crowd. The car was fantastic. It was a bit tight at the start; Romain had a good start initially, I didn’t know whether it would be enough. It’s tough judgement up the hill and then I just tried to focus on myself. We had incredible pace again in the car and could control the gaps. I don’t know, eight in a row is… you are a legend, you know….

SV: Yes, 2007 in Indianapolis. To come back [to the US] last year and finish on the podium and today to win the race is incredible. I don’t know what to say.

Q. Romain, congratulations, your best effort of the season – sixth podium. You have represented Lotus in a very proud way. I guess number one in the team next year, right? Let’s make it official. So congratulations. Tell us about your race today?

Romain GROSJEAN: Yeah, good race. Good start, I could pass Mark and almost got Sebastian. The car was working very well today. I’m very proud to represent Lotus and my guys that are working in Enstone. It’s a fantastic team. Being between those two cars is our best – everyone did a 100 per cent job. It means a lot to do a podium here in the United States. I like this country. It’s always good to come here, so glad, and looking forward to come back on that beautiful track and hopefully next year we’ll be one step ahead.

Q. Mark, I guess this is going to be your last stop here in Formula One at the Circuit of the Americas, so not a bad effort today, third, a podium.

Mark WEBBER: Yeah. Obviously pole position was very important yesterday, so I knew it was going to be important and that it would cost me a lot better result today. A little bit disappointed not to qualify better. We knew it was not going to be the easiest to get into turn one from there. We had a good launch, a good start, but then obviously we all wanted to be on the outside. I got a little bit boxed in and then I had to pass Lewis. Then it’s not easy to pass Romain. He drove very well. He was very clean on the exit of eight, nine. The DRS in the end was a little bit short on the ratios but in the end that’s how you get the ratios for the whole race. So, good job for the whole team and I’m happy to finish on the podium in front of the American fans for the last time, in Formula One anyway. I’ll see you next year with the Porsche.

Q. Sebastian, your 12 win this season, seventh from pole, 38 th of your career but probably the most important number is that it’s the eighth in a row. Never been done before in Formula One. You got a bit fed up answering questions about it in anticipation but now that it’s actually happened and you’ve actually done it, how does it feel?

SV: It’s incredible. I think it’s one of those things that you never expect to… one of those records that you never expect to be beaten so it’s very difficult to find the right words. I didn’t really answer the questions the last couple of days because at the end of the day what makes me jump into the car is not a certain number. But certainly today, when you realise that you’ve done it, it makes you very proud in that moment and, yeah, I think it’s very difficult for all of us to realise what it actually means. If you look back, and if you look those names who had similar records or outstanding performances in the past, I think it’s impossible to understand. People look back and they talk about that time and about certain drivers and one day people might look back and talk about our time and what we’ve done as a team. I said it on the team radio, the spirit is fantastic. Everybody’s just happy to turn up, give it everything he has and I think – if there is one – that’s the secret. Yes, we have a phenomenal car; yes, the car has been mostly very, very reliable but I think it’s the mindset we have going in, really trying to give it everything we have, not miss a single step… yeah… How to, after the race, not to turn around and think that there was a little bit left here, a little bit left there. Another very, very, very strong weekend. I think people tend to forget that every single weekend is a challenge on its own. It’s not eight weekends as a whole. It’s every single weekend. And to have such an incredible run, it’s very difficult to realise.

Q. Romain, your sixth podium of the season. I think you just said in your own language that it’s one year ago that you became a father. It’s been an amazing turn around from last year to this year but obviously this was a race all about your start and particularly then about soaking up the pressure from Mark in the closing stages. Tell us about it.

RG: Yes, exactly. We knew that the start would be crucial for us and then the race, if they were going ahead, they had too much speed for us, basically. They’re doing a fantastic job with a phenomenal car, as Seb says. But we can… he spoke about the spirit in his team and I think we have the same: every guy is happy to come in the morning and happy to work and check things. Y’know, drivers will always complain about this and this and this. They change it and it brings us to second at the end of the day. So, a very good start, a very good strategy, same as everyone else – I think I was just a little bit better on the option. I said in my own language that one year ago my wife sent me a picture of a pregnancy test saying that ‘well done Champion, you’re going to be a Dad!’ So America brings me a lot of bliss and pleasure and looking forward to come back here.

Q. Mark from your point of view. Obviously starting second. The initial getaway looked fine but it then was going up the hill that you lost the initiative. I guess your race really was dictated by qualifying yesterday to a large extent but particularly by the getaway today.

MW: Yeah, pole position yesterday was where the fight was. Going to be very difficult from there. I think we were… I was very happy with how I drove today. Got a