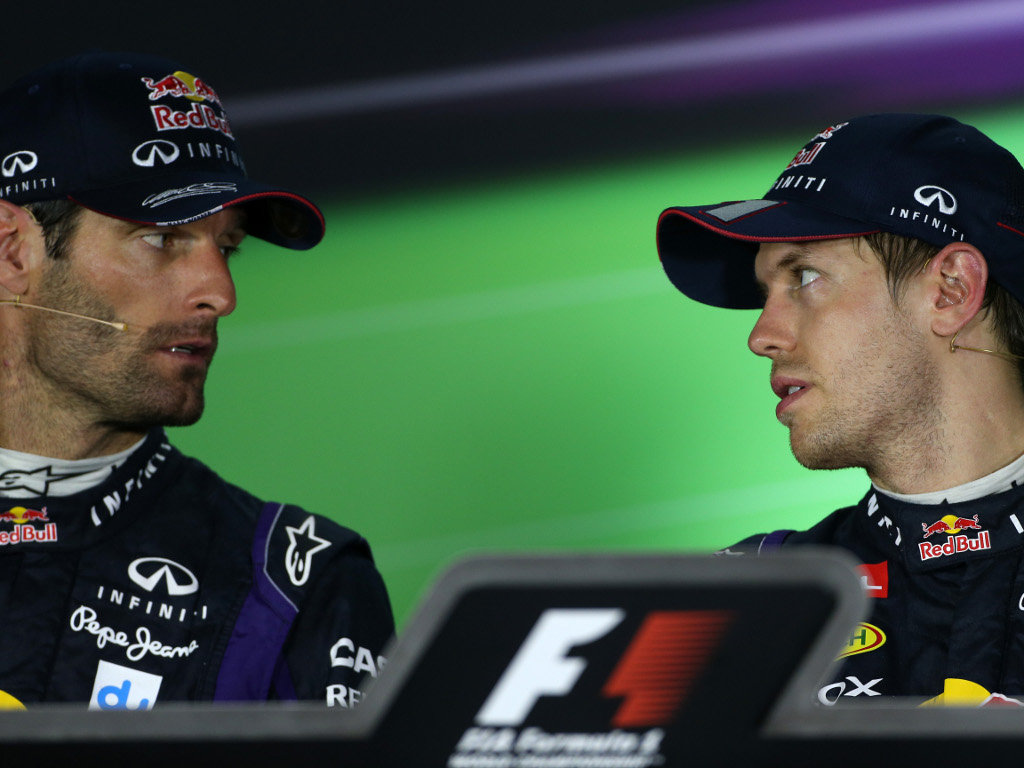 Q: Sebastian, seven in a row, 11 so far this season. They’re going to charge you rent on this top step soon.

Sebastian VETTEL: Yeah, I don’t mind. I also did some donuts so…

Q: You are a naughty boy, that’s going to cost somebody some money…

SV: No, I don’t think so because this time I bought the car back so it’s fine. As you can see it’s in parc ferme. No, it’s incredible. Thanks to all the fans, the atmosphere today. Twice, we have this complex around Five, Six and Seven and then around Eight and Nine, along the straight to Turn 11. So many people, so many German flags, so nice to see and to get so much support. More and more for Red Bull so I hope that kicks up more in the next years. The car was absolutely brilliant. Absolutely brilliant. Not much more to say. I was flying at some stages. At least it felt like it. Massive gaps, big surprise. Thanks to the team, thanks to Renault as well. A lot of our success is also down to them. They’re doing a very, very good job and I hope that next year we’ll have an engine that’s as powerful and as reliable as this year’s.

Q: Talking of support, your Mum and Dad are down there somewhere. How much does it mean to win yet again in front of them?

SV: Yeah, it means a lot. Obviously spend most of my time racing in front of them when I was a small kid and obviously now there’s a little bit bigger toys, more people watching but it’s very special to me that they were here this weekend. I love them very much and want to dedicate the win today to them. I think I learned a lot of good things from them and one day if I had kids I want to pass exactly these things on.

Q: Mark, well you tried your best, you gave it plenty but the start hurt you a little bit out there.

Mark WEBBER: Yeah. The start wasn’t great. Nico got an unbelievable start, Seb’s was a bit better than mine. I think we were lucky we’re not at Malaysia or Monza because it would have been even more painful. Anyway, I think in the first stint just not strong enough and on the soft tyres Seb got a very good gap. I had to reposition on the primes. So anyway, after that the race started pretty well for me but then Seb… he was gone. He was on another category out in front and I had to have a little battle with Nico for second. Guys did a great job on the car all week here. Nice and reliable. Fans have been great: plenty of Aussie flags here as well, so thanks guys coming from Australia. And…yeah, on to Austin and few more to go. Thank you.

Q: This guy. You’ve ended up in an era where you’re unfortunately his team-mate. That’s tough, isn’t it?

MW: Yeah. I think he’s in a sweet spot, for sure. Obviously I’ve got a few grey hairs now, I’m doing my best but yeah, he’s driving well. In the end I did my best today. It’s a circuit which… it’s my equal PB around here so would have liked to have got the win but that was Seb’s today. Thank You.

Q: Great drive Nico, you must be thoroughly satisfied to be up here.

Nico Rosberg: Yeah, I happy of course. Third place is good. The aim for the weekend was to be best of the rest behind the Red Bulls and that’s worked out – even though second place would have been possible in a perfect world today. Mark just got me with Di Resta. Little bit disappointing on that one but otherwise of course very happy.

Q: And you take a lot more points off Ferrari again for the team. Lewis had a little difficult afternoon but that’s looking good as well for second in the world championship for the team.

NR: Yes, for sure. I was very happy to hear that we took some more points off them again and that we’re edging away from them. That’s the most important thing for us at the moment – just to finish second in the Constructors’. It’s just much more money for next year but also motivation for everybody. If everybody in the factory can see that we built the second-best car this year, that’s just a massive boost.

Q: One final word from Sebastian. You’re so gentle with these tyres. What’s the secret champ?

SV: I don’t know if there’s a secret. I’ve got traction control – at least that’s what they said three or four races ago. No. These tyres are difficult to drive. Extremely sensitive. Obviously it helps when you are in free air. Not so much in traffic. But somehow we got the hang of it. More and more so towards the end of the year. And looking after them, really listening to them and being able to extract maybe a little bit more performance than the other guys. But I don’t think there’s any secret genetically. So… yeah. I’ll take it though.

Q: Sebastian, seven wins in a row, equalling the record. I guess in Austin you can go for the record. Are these numbers important to you?

SV: It doesn’t make me jump into the car but it’s a shock when you mention these [Schumacher and Ascari]. I knew that any kind of record you talk about, Michael is involved for sure, so… yeah… I don’t know what to say. The thing is that people see seven races. People don’t see the challenge it takes every single race to nail it. It’s been exceptional. The fact that we got everything right: smooth pitstops; reliability. All these things need to come together. To answer your question, the numbers are not that important to me but equally they make me very, very proud. It you equal something or you’re close to something then… the guys you talk about are the most special drivers in the world in Formula One. So, yeah, I don’t think I’m old enough to realise. Probably.

Q: What does seem to be important to you is doing donuts at the end of grands prix. You did it again today. Are you not worried about getting into trouble again?

SV: Not really because technically I didn’t do anything wrong. I brought the car back. I think I stick to the rules. I hope that we can provide a fuel sample because obviously it burns some extra fuel. But… yeah… obviously I spoke to the stewards after India. I’m not sure I remember everything they said but… yeah… I was just happy. It’s a sort of stadium there. It’s really nice, people all around you. I think they loved it.