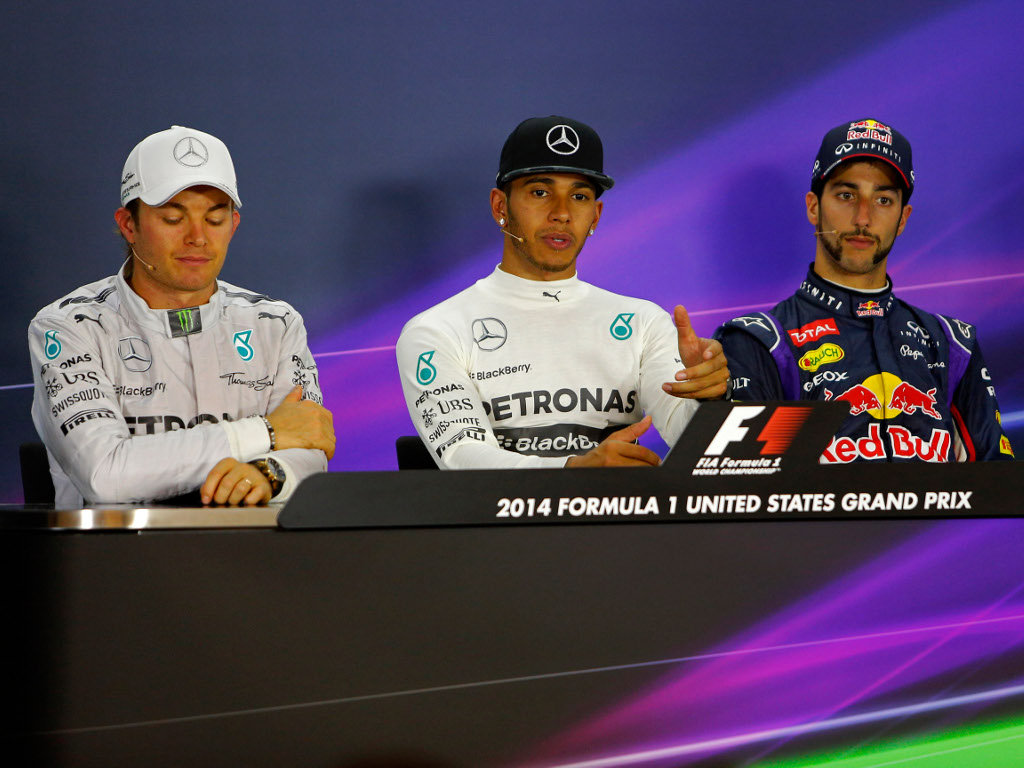 Lewis Hamilton, Nico Rosberg and Daniel Ricciardo completed the podium at the US GP and spoke with the media…

Q: Hello Austin, another exciting and beautiful race in the record books. Amazing, guys. All my deputies here. Lewis, if my math is correct it’s your tenth win this season, a 24-point lead in the championship. Oh my gosh. Three races, two wins and a second, is there anything you can tell me about your secret here?

Lewis HAMILTON: You know, this is an incredible place. I’ve got such great support here, so a big, huge thank you to the fans here. Again, I’ve been so fortunate – I’ve got an incredible team, an incredible and I had a great competitor today and I’m really grateful to be up front. I’m really excited. It’s such a privilege to be representing my country and to be at the top of the driver wins is really quite special.

Q: A beautiful job, obviously. You had work to do. You’ve done that in the past. You made a beautiful pass on your friend here Nico and I think you might have caught him by surprise a little bit but after that in clear air it looked like clear sailing, because it looked like the car just worked perfectly for you?

LH: The car was great today, but you know what, where’s the Stetson? Can I use your hat?

MA: In a minute… I’m still on official duty.

Q: Nico, great start, brilliant pole. It looks to me like you were caught a little bit by surprise on that overtake early on in the race and once Lewis got into clear air it seemed like you had a tough time. Nevertheless a one-two, many times this year, a brilliant performance by both of you and kudos to Mercedes.

Nico ROSBERG: Yeah, it definitely kind of sucks to me today, but that’s the way it is (inaudible). It took too long for me to find my rhythm. Once Lewis got by I found my rhythm, but it was too late, so that kind of sucked. But anyways, thank you to all of you; you’ve been fantastic today. As I see, you’ve had a great time, that’s important and it’s great that F1 is in Texas.

Q: Seventy-five points still available before the end of the season, so the fight is still open right. Daniel, wow! Eight podiums this season, you’re just right there aren’t there aren’t you? Keeping these two pretty honest aren’t you? That’s fabulous to see.

Daniel RICCIARDO: Yeah we’re doing what we can. We all had a great weekend. So, firstly, thanks to all the fans. It’s honestly a pleasure to come out here. Austin’s great – the circuit, the facilities, the town, everything’s good. So thanks to Red Bull for giving me the package to fight for the podium today and I’m really happy with third place.

Q: That was brilliant obviously as I said. Some of your overtakes are textbook. As a young man it’s amazing. It’s fun to watch, honestly.

DR: Thanks. This place is great. You can overtake here, there are a lot of opportunities. I got Magnussen on lap one and then Fernando on the restart, so it wasn’t too boring out there.

Q: Lewis, well done, what an amazing run of races you’ve had, these five victories, absolutely fantastic. How have you felt about those?

LH: It’s been an incredible run. This whole season has been incredible really. Just an unbelievable job done by the team. Nico was very quick in qualifying yesterday. Obviously I said I had a couple of problems and I corrected them today and, never know how the race is going to go but I pushed as hard as I could, particularly in the first stint. And the second stint I seemed to be even quicker on that stint. Once I got past Nico it was really just about controlling it. Coming here today, just having that same determination and hunger to get that win. And, as I said, there’s not a better crowd really to do that in front of.

Q: Tell us about that overtake. How did that happen? How did you feel about that? Was it all DRS? How did it actually happen?

LH: It’s obviously a very good circuit to be able to follow but it’s not easy and it was very hard through the middle sector to try to stay as close to him as possible and get as close as I could to the DRS zone. And I was quite a bit back, I would say, but I felt very confident, there was a big headwind into 12, and I just felt like I was waiting for the moment really, to just be just close enough to throw it up the inside. And that’s what I did. There’s a kind of… you have to decide how much of a risk you’re willing to take. Nico wasn’t defending there really so almost caught him unaware. And after that, really I was just trying to maintain it. But what an incredible achievement. I’m so grateful. Big thank you to all my team and to my family because the results that I’ve had and the amount of wins that I’ve had wouldn’t have been possible without those people.

Q: You talked yesterday about brakes and also a little bit about a flat-spot. There was no sign of that during the opening laps?

LH: No, there was no problem. Fortunately it was a small one. But when the Safety Car came out I did have that big difference of around 100