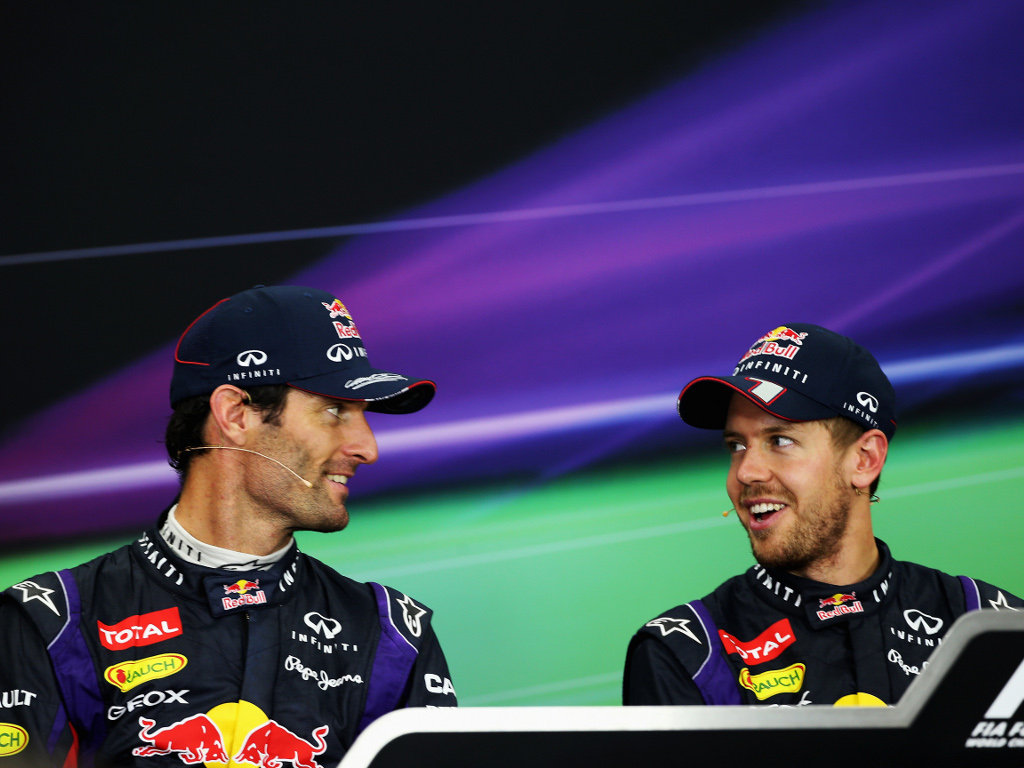 Q: [Sebastian] Nine times a winner already this season – but the championship is still alive. Tell me all about it.

Sebastian VETTEL: Konnichi-wa, first of all. Yeah, first of all, I would like to say thank you to all the fans. Every time we come here, the appreciation, the respect we get as drivers is incredible. Obviously, I’m blown away with today’s race. I had a very, very poor start. I think it was right between Romain and, I think, Lewis and I clipped a little bit the front wing. I think Lewis had a puncture after that. I couldn’t go anywhere. After that we were patient, looked after the tyres and had incredible pace towards the end. So we managed to get past Romain, beat Mark on another strategy so, all in all, fantastic. I’m so overwhelmed every time we come here. Thank you very much again for the support.

Q: Who made the final decision on what tyres you were going to run? We got the impression you made the decision right at the very last moment.

SV: Well, to be honest, it happened… I think the decision was already made in the first stint because we stayed out longer, so we obviously took into account that we lapped slower than the others who were on fresh tyres, in order to push them later in the race. We had a similar race in 2011, where I think I came in always as the first and I was under enormous pressure towards the end of the race and got passed by two cars. So this time we did it the other way around: had enough pace in the car to look after the tyres, control the race. Yeah, it was not easy to make the two-stop work, especially in the middle stint – but I think the first stint was crucial to make the decision to stay out and then decide for a two-stop, which turned out to be… [interrupted]

Q: Mark, your last grand prix in a Formula One car at Suzuka, one of the great all-time tracks. Tell us about it.

Mark WEBBER: Yeah, it’s an amazing circuit. The race today was pretty good, I’d say. Obviously I would have liked one more step on the podium but there were different strategies going on. Seb went longer in the first stint and then it unloaded his race a bit better than mine at the end. So, in general, pretty happy with second but, yeah, hey, you always want a bit more but we got the best out of what I could today. Both of us had very poor starts, which put us on the back foot a little bit and then after that it was just really trying to pace the car again on the tyres and making sure they survived to do the sort of strategy we wanted to. In the end we went to three-stop, which put us a little bit on the back foot but still we got back to where we were.

Q: Romain, we were writing you off last year, we didn’t think you’d have a seat, and here you are, on the podium. How does that feel?

Romain GROSJEAN: Well, much better than last year for sure. What a start! Terrific. From the past not the best memories here but today was just a very, very good race. The car was fantastic on option tyres to start the race with and we did manage to pull away. Then the Red Bulls catch us a little bit I think, but generally with the work we did, we are the only ones able to follow those guys. We almost catch the Bull I said to my engineer today – it’s a home race for my engineer and I think he’s very happy. Always very good to come here, always very proud of the fans and being on the podium at such a difficult track – it’s good.

Q: Sebastian, you’re ever so close to pulling it off with your fourth consecutive championship. What are your thoughts going into the next race?

SV: First of all, I would like to enjoy today. I think it was a fantastic race. I love this track. As I said, the people are great and make it a very, very special place for us. I’d love to enjoy that first, obviously it does no harm when you win, for the championship. I’ve won now four times here in Suzuka, which is incredible. I’m really looking forward to next year, to be honest. Regarding the championship, as I said, I think obviously we have a very, very good gap but we still keep pushing. I think we’ve proven in the last couple of years that we never give up. I think we’ve won one or two championships because of that. Obviously this year it looks very good at this stage – but it’s not over before it’s over.

Q: Sebastian, you really did seem to enjoy this victory hugely. Is it because of the various problems that happened along the way? The start, for example, the first corner, one or two lock-ups, an interesting tactic…

SV: Yeah, certainly – but I think mostly it’s because of the circuit and the fans to be honest. It’s one of the highlights in the year. I love this track and I’ve been very, very fortunate to have a great car in the past and against this year, being able to finish on the podium and win four times now. Incredible. When we leave the hotel in the morning I think it’s the same for all of us. It makes it so special. The people are crazy about Formula One. They really, yeah, admire us, which is very nice. They love what we do and appreciate the fact we go around. You have the people on the grandstand yesterday, I ran the circuit and there were I think 5,000 people on the grandstand just watching. They are amazed by Formula One and I think that makes it so special and taste so sweet. As you touched on, obviously with the race today, a horrible start but then a fantastic comeback.

SV: Well, you know, you struggle more in the end obviously. I tried to control the gaps. Obviously we started already to go longer than Romain and Mark in the first stint, so we took into account that we lap a second a lap slower for two or three laps compared to them in order to get the range in the next stint and then tried to extend that to really put them under pressure towards the end. That was, let’s say, the game plan. Obviously after the first pit stop I think very soon in the second stint, Mark decided to go for the three-stop, which wasn’t far off. Before the race I think we targeted more towards two stops but the tyres weren’t holding up as well as probably we thought. As I said, I really tried to manage the gaps in the beginning of the stint and then close the gap, which worked brilliantly, especially with Romain. The end of the second stint I was just on his tail when he pitted, able to stay out another couple of laps and then I had more or less fresh tyres when I was able to pass him, so, yeah, great strategy. It obviously worked. We made it… we didn’t lose the patience early on