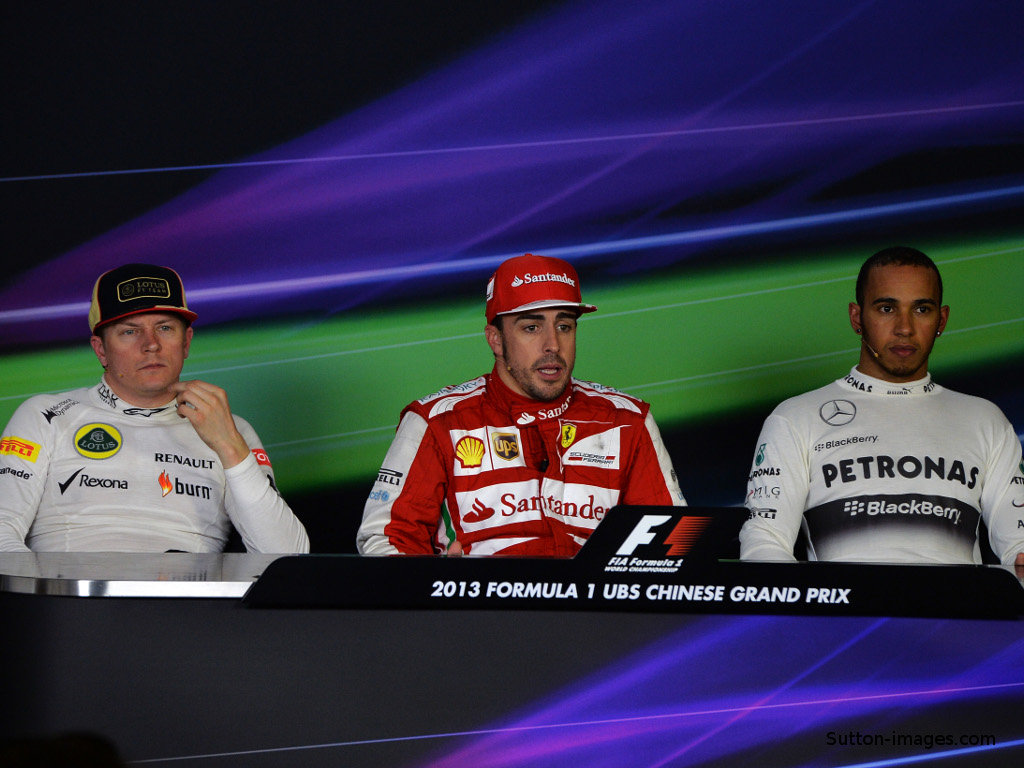 Q: Fernando, congratulations. A fairly dominant victory in the end and your 31st victory, putting you fifth in the all-time list just behind Ayrton Senna. What does this one mean to you?

Q:Fernando Alonso: Well, hello everybody first of all and thank you for the support all weekend. Amazing fans all weekend and it’s very nice to race here. About the race: yes, definitely it was a fantastic race for us, from the start to the end, without big problems with the car. The tyre degradation was better than expected probably, so we managed more or less the pace. Yeah, it feels great after the retirement in Malaysia, we had some pressure to finish the race. The two races we finished this year; one second place and today the victory so definitely the start of this 2013 campaign is looking good so we are very optimistic.

Q: We heard the team talking to you during the grand prix telling you not need to push. They were trying to slow you down in some respects and you were saying ‘I’m not pushing’.

FA: Well, you always push. In a Formula One race it’s impossible not to push but it’s true that we had some pace, maybe, in the pocket. Not easy to know when to use it depending on the state of the tyres. A little bit more potential and hopefully we can show it in Bahrain in one week.

Q: Kimi Raikkonen, that’s your 20th consecutive finish in Formula One. You’re certainly Mr Consistency. You had to work hard for that second place today. You had some damage to the front wing of your car after some contact, so tell us about that and also how it affected the balance?

Kimi Raikkonen: I think in the end it was a pretty okay result. Obviously we want to win but after a bad start the car wads handling well but then overtaking Perez, I was next to him and he just pushed me on the kerb but I tried to avoid him but I went on the grass and hit him on the rear I think and damaged the front. That didn’t help but luckily it didn’t affect so much the handling, it was just a bit too much understeery but we could still fight for second place. For sure without the damage we could have been quite a bit faster. Anyhow, good points and we try to do better next time.

Q:We come to Lewis Hamilton, our pole-sitter. It didn’t quite work out for you there on race pace. You really dropped away towards the closing stages, under a lot of pressure from Vettel but some great racing nonetheless.

Lewis Hamilton: Yeah, I’m really happy with today’s result. Great result for the team, very happy with the points. The team did a fantastic job all weekend. Unfortunately, we didn’t have the kind of pace these two have but still very fortunate to get on the podium.

Q: Fernando, a closing question for you. Only one week until Bahrain. What are you expecting in terms of performance there and what’s the celebration going to be like tonight with your Ferrari team?

FA: I expect a tough race again. In Bahrain I think we will see different conditions and who knows how competitive anyone can be. But definitely, as I said before, from the races that we finished this year the car seems to be able to be on the podium, so we hope to be on the podium again in Bahrain. The celebration tonight? Nothing special. I have a flight very early for Bahrain, so tonight I think some dinner. I think they guys will celebrate more than me.

Q: Fernando, congratulations, well done. You were a winner here in 2005, how does it feel to have won again? It seemed to be a perfect race for you.

FA: It feels good. Obviously a long time from the victory here – eight years. Definitely it was nearly a perfect Sunday for us, with not any problem in the race. The start was clean; it was good. We managed to overtake Kimi. And then in the first stint we managed to pass Lewis as well. The car felt a little bit better on the degradation side let’s say. And then in the rest of the race, obviously you need to take car of the tyres a little bit, you need to manage the gap with the guys behind. It was not so easy to understand the race sometimes. We were overtaking the McLarens, Hulkenberg, Sebastian, so it was a little bit of a mix. So it was not an easy race and there were some moments of action let’s say and the risk is there when you have to do an overtaking manoeuvre and you have to manage that as well. The team did a perfect job with the set-up of the car for quali and the race, perfect pit stop times and pit stops executed let’s say. At the end of the race the victory is a good reward for the team, well deserved after the disappointment in Malaysia and you know, the car felt good. The two races we finished, one was second and the victory today, so definitely it’s a positive start to this championship. We need to keep going like that, in this direction, with good weekends, with not any extra risk and hopefully in Bahrain we can score some good points again.

Q:Kimi, obviously a bit of a problem at the start there, tell us about that, and also how much pressure was there at the end as well?

KR: I think we just had wrong settings. The practice start was very good but then it was really bad the real start and we lost some positions and after that the car was okay, but I had a little accident, some problems with Perez and we damaged the nose and the front wing. I was surprised there was no more damage because I hit him quite hard. Also bit surprised that we didn’t have any more problems after that. A bit too much understeer and destroying the front tyre because of that but we still could fight for second place and get quite a good result in the end. Obviously we wanted to try to win but today with all the issues it was not possible.

Q: Lewis it was kind of tight at the end with Sebastian closing on you and obviously you were trying to put pressure on Kimi. Tell us about it.

LH: Yeah, it was a good race for me. Quite happy with third. Of course I would have liked to have won but congratulations to Fernando, he did a great job and so did Kimi. They were both a little bit too fast for us during the race. I was seeming to be able to apply a little bit of pressure to Kimi but not enough to get close to him and overtake. My tyres were shot at the end and there was nothing I could do really to hold off Sebastian. A little bit unlucky with some traffic. Still, to get on the podium, really happy. Really happy with the points as well.