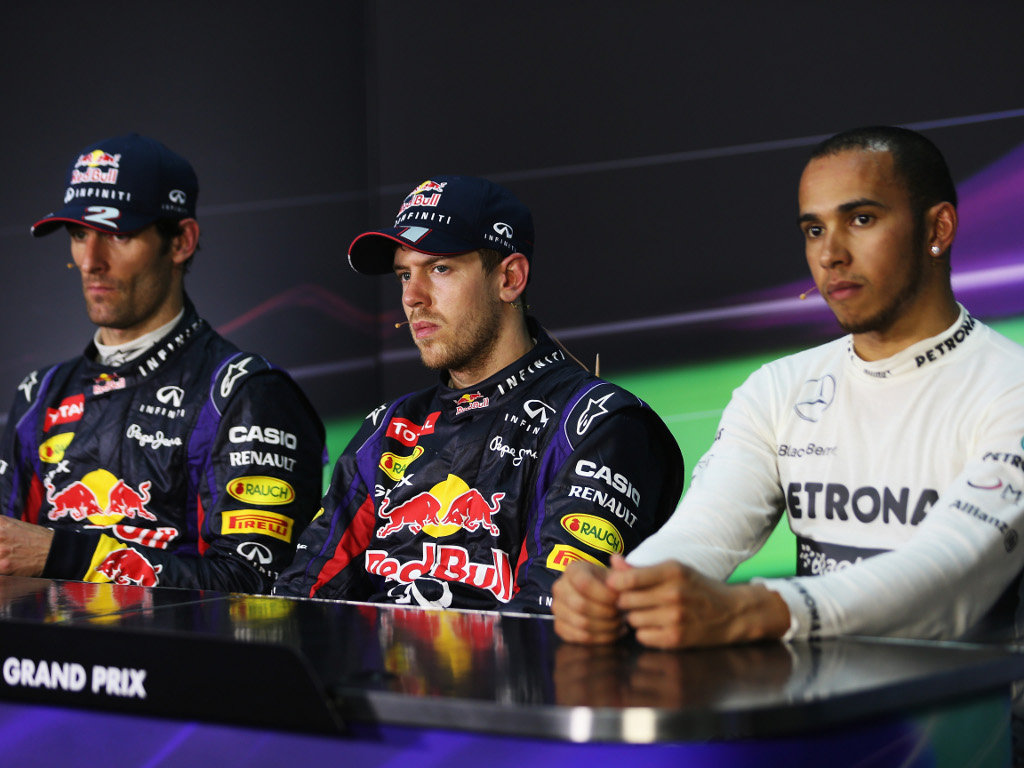 Q. We’re going to start with Sebastian. That’s your 27th victory. You now match Sir Jackie Stewart with that but it looked pretty close out there on laps 43 and 44, take us through that.

Sebastian VETTEL: Obviously it was very close wheel-to-wheel racing. I think there wasn’t much room for either of us so obviously it was a tight battle. I think probably I was a little bit too keen too soon because I obviously in terms of strategy was on the soft tyre towards the end, on the softer compound, felt I had a little bit more, so yeah, obviously enjoyed the fight, had the upper hand in the end. Throughout the whole race it was very close. Mark was always a little bit ahead – I was stuck in traffic. In the middle of the race I wasn’t quite sure about the strategy but towards the end it seems to work very well because we were able to save that extra set and it came off with a little bit more speed.

Q. Obviously there is going to be a little bit of friction, we heard on your team radio “congratulations, but there is a some explaining to do”. How do you feel about the race itself in that respect?

SV: I think obviously it’s very hot today and I think if there is something to say then we need to talk internally. For sure we both enjoyed that. Of course, I’m standing in the middle now, so I probably enjoyed it a little bit more. But there is plenty of time to talk about.

Q. start, that’s not always your strongest suit but you were in good shape at the beginning of the race.

Mark WEBBER: Yeah the first part of the grand prix went very well for us. I think very tricky conditions for all of us on the intermediates to start with. In the end, yeah I think we got the right strategy I think early in the race with the inters, getting the crossover quite nice. Then really it was just controlling the race and getting everything in place towards the back end of the race. Obviously I had to mark Lewis off a little bit in the middle there and then after the last stop obviously the team told me the race was over, we turned the engines down and we go to the end. I want to race as well, but in the end the team made a decision, which we always say before the race is probably how it’s going to be – we look after the tyres, get the car to the end and in the end Seb made his own decisions today and will have protection and that’s the way it goes.

Q. So you were surprised when he went past you?

MW: Yeah, well I turned my engine down and started cruising on the tyres and the fight was off. Anyway, we know he’s a quick peddler but I was disappointed with the outcome of today’s race. In the end the team did a good job, I had some good fans here from Australia, so thanks guys. I did my best.

Q. Can you take any positives away from today?

MW: Yeah I think there were a lot of things I did pretty well, from my driving, the start on the inters, there are a lot of areas where you can get that wrong, obviously like Fernando, that’s unusual for him. So in the end you’ve got drive slow on these tyres, we’re not pushing flat out as usual, all the leaders are driving very slow to save the tyres.

Q. I’ll move to Lewis Hamilton, our third-place finisher. Lewis, you similarly had a very tough fight with your team-mate but it seemed to be all about saving fuel for you at the end of the race.

Lewis HAMILTON: Yeah, absolutely. The team did a fantastic job, it’s great to be up here for them. If I’m honest I really that Nico should be standing here. Generally he had better pace than me throughout the race. He’s a great team-mate and did a fantastic job today. On our side I was fuel-saving for a long, long time and unable to keep the pace of the guys in front but nonetheless we brought it home, the guys did a great job and I’m proud to be up here for them.

Q. Nico was certainly asking in very strong terms to be allowed to come past you at one point, but at that point I think Ross had called the race off hadn’t he?

LH: Yeah, I can’t say it’s the best feeling being up here but racing is racing and I really just have to keep looking forward.

Q. We’ve got to ask you about that pit stop – you fancied stopping at McLaren, for old times’ sake maybe?

LH: Yeah, I just did a Jenson. He did that a couple of years ago. Used to, for so many years, driving to the McLaren pit stop I don’t know how I got it wrong. So big apologies to the team.

Q. I respect you’re such competitive drivers, such competitive athletes. You’re all kind of happy/unhappy up here today. It’s been that kind of race. But at the end of the day, Sebastian, looking pretty good for the championship – not in the long-term but for your championship position obviously it’s been a great day.

SV: Yeah, I think in that regard it’s obviously a long race. It’s good at this stage of the year to score points and we go from there but thinking about the championship right now, it’s way too early. I think it was a great race for the team today. I think we did better on the tyres than we expected. Obviously it dried pretty quickly but we had a pretty clean race in terms of tyres after that.

Q: Sebastian, congratulations, your 27th career victory, equalling Sir Jackie Stewart and on a day when one of your main rivals for the championship, arguably, Fernando Alonso scored no points. You said at the midway stage in the race, something along the lines of “I’m faster than Mark, let me through.” But in the end, you did it yourself. Can you tell us how your race unfolded.