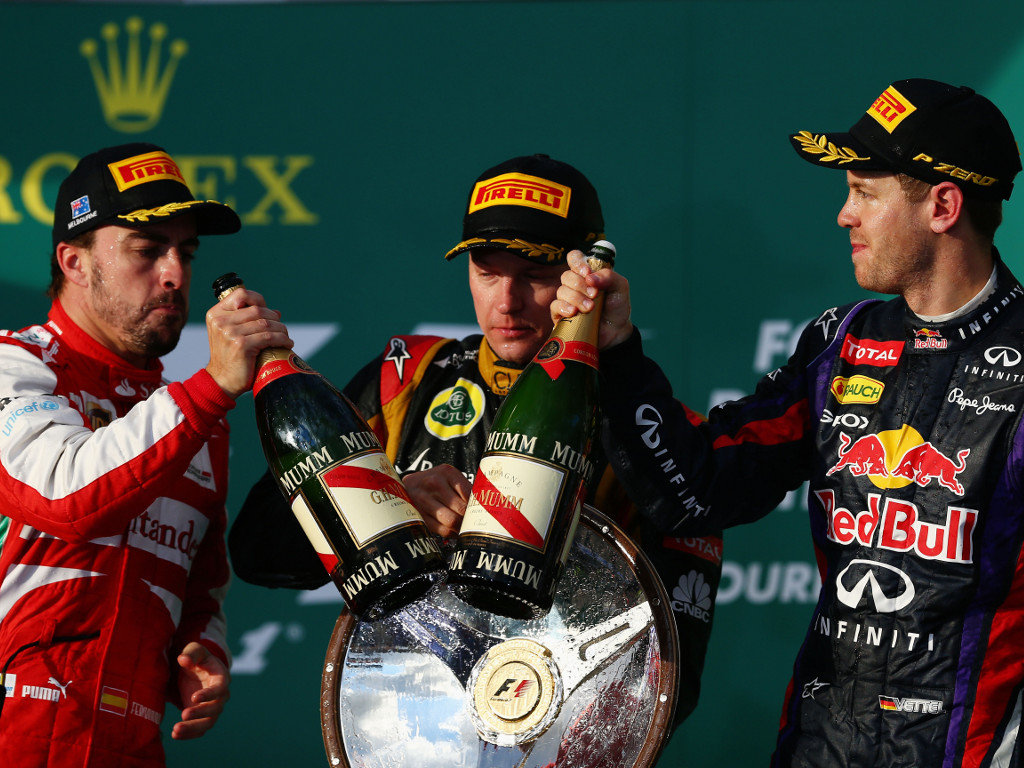 Kimi RAIKKONEN: It’s the first race, so you don’t really know how it’s going to go, how the tyres are going to be. I didn’t really do any long runs in the winter. I knew that I had a good car, so I had a feeling that it was going to be a good race but you have to get through the first laps and then go from there.

KR: No, I mean Fernando was catching me at some point, when I was taking it a bit more easy and there was some traffic, so I just wanted to make sure that if the rain comes or something happens we have a bit more gap. I was still taking it pretty easy. Like I said, the car has been very good all weekend and it was a pretty nice race, not so difficult.

Q. Fernando, second place. How are you feeling about that?

Fernando ALONSO: Fantastic. Obviously it was fantastic race, with fighting all through the race. Big thanks to the fans all weekend. We felt sad yesterday when we postponed the qualifying until today, because they were in the grandstands with the rain, the windy conditions and at the end we didn’t run. So today we had to put on a good show for everybody and I think we did it, because the race was action every lap. I personally enjoyed it. Obviously at the end it was a little bit sad not to be able to win the race, but Kimi was fantastic today, the Lotus car as well. We need to congratulate them for a fantastic race.

Q. You made some pretty bold moves when you came out of the pits after your stops. You really had to push, with Adrian Sutil and generally you had to push hard for that.

FA: Yeah, it was not an easy race. At the beginning traffic with Sebastian and Felipe and then traffic with Sutil, some tricky moments. But at the end, as I said, extremely happy. We had a very difficult start to the season two years ago and last year as well and this year is very different. We feel much more optimistic. The car is responding well, we are competitive so we have a very interesting season ahead of us.

Q. But isn’t it very worrying that they could do two stops? I’m assuming you couldn’t do a two-stop race.

FA: It is a worry, yes. Obviously Lotus did a very good job. Kimi was driving fantastically all through the race and he managed two stops, so we need to analyse what we can do for the next race. We have only four days to work on the car to prepare for the next race and I think he will again be a tough opponent.

Q. Sebastian, only third today but the crowd are obviously very appreciative of what you did. But what happened to the Red Bull pace we were expecting?

Sebastian VETTEL: Well, I think first of all we can be happy with today. Obviously we wanted more. Clearly when you start from pole you want to win. I think we could see after a very good start, and a good first two or three laps, that the tyres were falling apart and we couldn’t go as long as other people. So congratulations to Lotus and especially to Kimi, I think they did the best job today. An little bit of a surprise when I saw on the pitwall that I was lacking one position to count because I knew Fernando passed us at the stop but I didn’t know where the other car was coming from but I think they had incredible pace. Same goes for Ferrari. I think we were third-quickest today and very happy to get third place.

Q. Do you think it was just the conditions, the track temperatures or are you seriously worried about the pace of Lotus and Ferrari?

SV: No, I’m not worried. I have to admit sometimes that other people are faster. I think we can be very happy today. We had a great qualifying session this morning and this afternoon unfortunately didn’t quite work the way we would have liked but it’s a long season, a long way ahead of us, so good points to start. Surely we wanted a little bit more but there’s no reason to be disappointed.

SV:Q. One quick word with our winner Kimi Raikkonen: Kimi, you lead the world championship. You had two years away rallying, you came back and won a race last year did a great job but here you are leading the championship again. How does that feel?

KR: It feels good but it’s only after one race. It doesn’t really change our aim and our work for this year. Definitely we are happy with the win but there is an awful lot to still do to try to win the championship. We seemed to have a good car here and hopefully it works well in the next races also.

Q. Kimi, did you believe from that seventh position the win was there for you today?

KR: I was pretty disappointed this morning after the qualifying. Obviously there was only one lap really on the dries and I took it a bit too easy and got a bit of a small mistake in one corner. It was more timing and getting it right than really the maximum speed from all the cars, so not the ideal starting place but it was still ten places better than last year, so not a disaster in that way. I knew that my car is quite good. It’s been feeling good all weekend and when we did the longer run it felt good. We only destroy the front tyres so we knew if we get the front tyres lasting it should be fine. In a way I was pretty confident – but of course you have to get through the start and the first lap and it’s the first race so you never know what’s going to happen with the conditions and the circuit after the rain and with tyres, so there’s a lot of question marks. I felt I had a good car and it turned out to be pretty good.

Q. Alan Permane said to you, on the subject of tyres in parc ferme, “we got it absolutely right today.” Was that just one of the ingredients where everything seemed to fall into place for you?

KR: Yeah, I mean our plan was to do two-stop and it’s always difficult, especially the first races, to really know when to stop, and not doing it too early and not too late. We got it, like he said, exactly right. The team worked very well and we had a good plan, and we follow the plan and it work out perfectly for us. I could save the tyres and I could go fast if I needed and I could really drive very easily. One of the easiest races I’ve done to win the race. Hopefully we can have many more of this kind of races.

Q. Fernando, turning to you, you