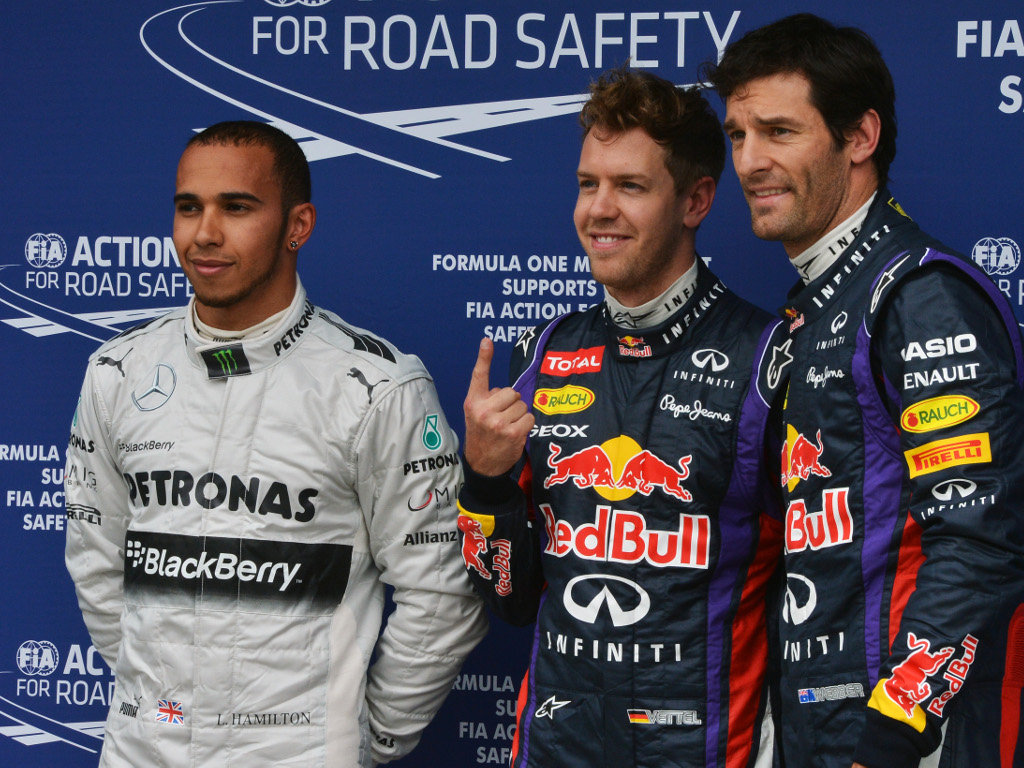 Q. Sebastian, surely that was the best way possible to start the season?

Sebastian VETTEL: Yes, obviously it’s been a very good weekend so far for us, I have to say. Obviously, we came out of winter testing and didn’t know what to expect, but since Friday we got into the groove, I had a good feeling with the car, so I think we confirmed that in all conditions. Obviously a bit tricky yesterday and I think it was the right decision to call off qualifying and continue today but the main task is coming this afternoon.

Q. And the team seemed to run it absolutely right. I think you probably had another lap to go if necessary right at the end?

SV: Yeah, but then obviously with these conditions there is the fact of always getting quicker just because the circuit dries up and you get more confidence, you know, the exits of the corner when you turn in. You can adjust the amount of risk you take but obviously there is always the tyres. The supersoft used by the majority of people, or everyone, is very good for one lap but you can definitely feel the step down in grip, so we’ll see what happens this afternoon. But for now a perfect result for us as a team. Mark in second, so I think it’s a great way to start the race but it will be a long race. Weather-wise I’m not sure what is going to happen, probably a little bit better than it was so far but we’ll see.

Q. And surprisingly, perhaps, this is fairly similar to Barcelona testing in terms of temperatures.

SV: Yeah, so that’s what we are going to find out – whether it’s similar in terms of tyre wear this afternoon. Could be quite funny. I think it will be all about watching after the tyres. We’ve had a lot of practice in winter testing, the temperatures were very different; the circuit was very different. I think that’s the main difference, even though now it seems a bit cooler than the last couple of days.

Q. Mark, you’re equal best ever grid position here. What are your hopes for this afternoon?

Mark WEBBER: Yeah, first of all I think it was a great job from the team. Very, very tricky in those conditions and also very easy to make errors on any side – driver, procedurally, planning, all sorts of stuff. We survived the small bullets yesterday and then also got through today’s session with not far off the maximum we could get. In the end it was very chaotic, very difficult to get all the planning right. I think all the drivers are probably quite frustrated that they didn’t put slick a little bit earlier because it was just the third sector that was a little bit wet and you’re not quite sure h0ow the slick will take – the intermediate was well out of bed, you’re not sure how the slick will go. In the end it was a good quali and as you say this afternoon we’re now in a position to have a good afternoon. Five per cent of the job’s done. We know that the big stuff’s this afternoon, looking forward to the race. Unusually we finish quali and talk to you guys and we’ve got to get ready for the race now. Certainly we’re ready for it. I’m ready. The team’s ready, so looking forward to it.

Q. What can you do about that chap [Sebastian] beside you?

MW: Well, yeah, there’s got to be some calls made today on tyres and strategy and see how the balance of the cars are, and yeah, so it’s going to be a tight grand prix, potentially. But also if you’re not in the window with the tyres or having the balance where you need to be… it’s so early in the Championship for all of us on these tyres and working out how we’re going to execute a long grand prix, so things can blow open as well. I think we’ve done as much as we can in Europe. As you say, temperatures are very similar to Barcelona today – if not the same. 13 [