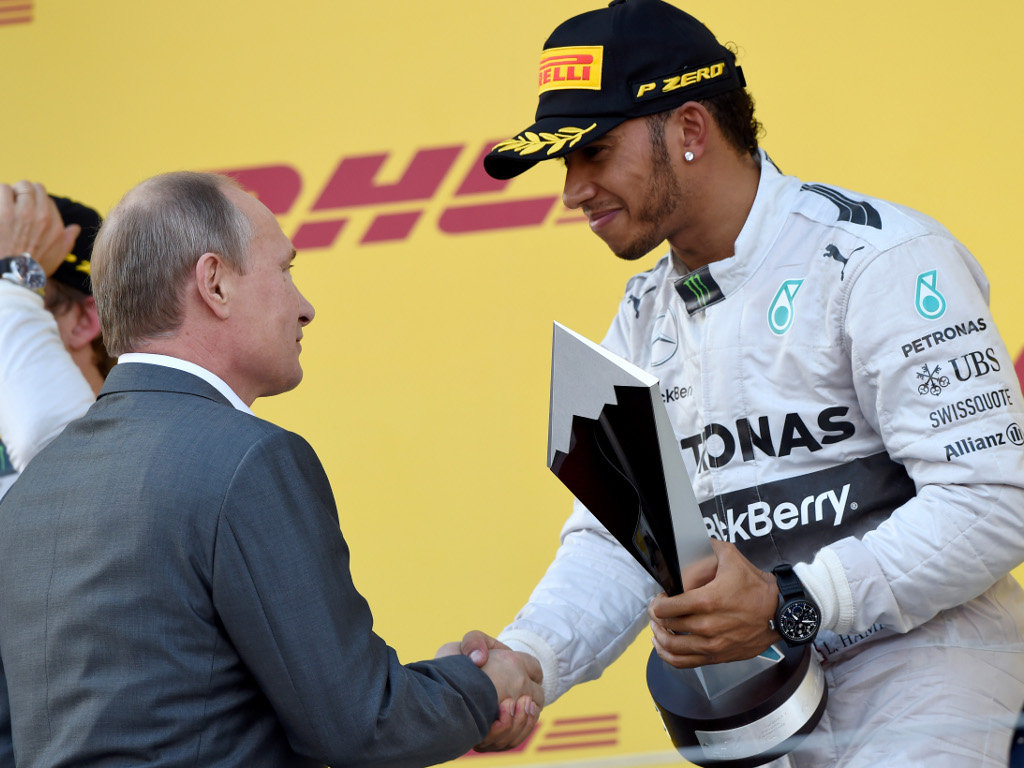 Q: What a wonderful race guys. Thank you very much? I know Lewis you are a real fan of Russia, Russian racing. You were back in Moscow sometime and now you’ve won first ever Russian Grand Prix since 100 years exactly. How do you feel?

Lewis HAMILTON: So happy to be here. We’ve had an amazing week. The fans and really the organisers… Russia’s been so good to me and to the team. I’m so grateful for all the support and I’m really looking forward to coming here many, many more times. It’s not very far from where I live so I’m going to be hopping over for some holidays for sure.

Q: I know you’re impressed by the ski resorts here. Look, 17 points now, you have. Seventeen points in front of Nico. You think it’s enough or not?

LH: Obviously Nico did a great job to recover from his mistake earlier on today but the car was performing really well. We did a great job as a team. It’s history for us, so I feel very proud to be a part of it – me and Nico and all the team members. To get the first Constructors’ Championship for Mercedes Benz is amazing, so it’s a beautiful day.

Q: Nico, it was a really wonderful fight with Valtteri and you won it. Do you really think the tyres were gone or was it a bluff, like in poker?

Nico ROSBERG: No, it was a great strategy from the team. The thing is that our car is unbelievable. It’s so good; everybody has done such a great job building this car. That’s why half of me of course is extremely disappointed that I messed up today but the other half, I’m really, really happy, because everybody in the team deserves it so much. For them the most important title of the year is the Constructors’ Championship, that’s why I can even smile a bit, because I’m happy for everybody to have achieved that.

Ladies and gentlemen, 52 laps on the same set of tyres, what a great race.

Q: Valtteri, on the last lap of the race, this man set the first ever in the history of Formula One fastest lap of the Russian Grand Prix. But you lost the fight with Nico, so are you happy or not?

Valtteri BOTTAS: Well, I need to be happy for us as a team. You know, what we have been doing since last year is amazing. Again on the podium, so a good amount of points. We were today ‘best of the rest’. Unfortunately, Mercedes is still quite a bit ahead but, you know, we did the best we could from where we started, so we need to be happy as a team.

Q: This man is still in the fight for third [in the Drivers’ Championship] with Daniel Ricciardo. But we are back for one quick question [with Lewis] because we all know the Russian story: the evening after the race, we must celebrate. And you have three weeks…

LH: Is there vodka?

Q: Lewis, congratulations, tremendous win there. We could see you were pushing very hard by the number of fastest laps you did – but you seemed to have virtually no problems. Any problems with fuel consumption? Any problems with tyres? Just one little lock-up we saw from you.

LH: Yeah, it was a good, good day and an amazing weekend. Firstly, I’m just so proud to have contributed to have worked with this great team, to get the first Constructors’ Championship for Mercedes-Benz. I could have only dreamed of that when I joined this team. So, a great day for that. Huge congratulations to all the guys that are here and back home in the UK and also in Germany. But yeah, today, once I was out in the lead I was really just having to control, just looking after the tyres, managing the fuel was quite straightforward. And then, towards the end of the race the car felt great so I could push or not push. I wasn’t really having to push much and even when I was having to pick up the pace a little bit when I eventually found Nico was behind, it was easy to match the times. And the car’s been amazing this weekend and I really, really enjoyed the track. I tell you, Russia’s been one of my favourite places so far this year, so it’s very cool to have won the first race here.

Q: Nico, a fantastic drive through the field really – but what happened on the first lap? We heard you say you had a vibration. Did that go with the change of tyres? Tell us about that because that really governed your whole race.

NR: Yeah, of course. It was just a mistake on my side, braked too late and that’s it. Very unnecessary because it was my corner and should have been in the lead after that. So, obviously very disappointed with that. After that my tyres were just square. They were vibrating so much I couldn’t see where I was going so I knew that I had to pit. For me, I thought that was it. I thought that was the end of the day – but then of course, partly happy to get back all the way to second, passing Valtteri along the way and then… yeah, it’s just thanks to my car. My car was just unbelievable today and that’s what allowed me to come back through the field. That’s the main thing really. In hindsight really, even if it was a bit… I could have pushed more during the race, y’know? But it’s always easy to know afterwards but even at the end my tyres were fine. So, yeah, that’s a pity but anyway, it’s difficult to know that during the race.

Q: Valtteri, at one point the pace seemed to be really close to Mercedes, perhaps closer than we’ve seen in any race so far this year.

VB: Yeah, the beginning seemed to be very good and I was not far off from Lewis and everything was going into the plan. The tyres were feeling good and suddenly the rear tyres started to go, started to lose pace and was struggling more and more and Lewis was getting far a way. Then we stopped for the Prime and it took just a really long time to get the Prime tyre to work. It was just getting better towards the end. I did my best lap in the last lap of the race. It was really weird. And as it took so long to get the tyres to work, Nico got me in Turn One. It was a bit of a surprise for me, didn’t expect him to come inside. Luckily I saw him in time so there was no contact. Yeah, as a team I think we again did a good job. We’ve come so much forward from last season so it’s again, really good to be on the podium.QUESTIONS FROM THE FLOOR

Q: (Michael Schmidt – Auto, Motor und Sport) Nico, when you tried to overtake Lewis at the first corner, you were on the inside line; is it because it’s not the racing line, is that line, let’s say, that you normally have to brake a little bit earlier to compensate?

NR: No, I don’t think so. It was definitely do-able and I just messed up, very simple, no explanation. Just braked too late and too hard.

Q: (Heikki Kulta – Turun Sanomat) Valtteri, last year you had your best result in Austin. Is it going to happen this year also?

VB: I really hope so. I got my first points in Formula One in Austin last year so it would be nice to have a good weekend there. I think the track should be OK for us so let’s aim for that.

Q: (Frederic Ferret – L’Equipe) Nico and Lewis: now that the Constructors’ title has been won, will you change your way of racing together or will it be the same?

NR: It’s the same, you know. Up until now, it’s always been we can fight and it continues to be like that. We can fight, it doesn’t change.

Q: (Haoran Zhou – F1 Express) Lewis, can you describe your experience on the podium and especially when you were handed the trophy? Be as specific as possible.

LH: Well, it was kind of normal really. Kind of surreal for the president to be presenting the award. That was a great experience. The crowd have been amazing this weekend. I don’t know, I just never… I didn’t know that Formula One was something that people followed here in Russia. I didn’t know that there was actually a real love for it. To see the people turn out in their thousands yesterday and the grandstands full and then again today… They’re really enthusiastic, it looks like they’re really excited that we’re here and on top of that they did an amazing job with the track, the layout, with the surface, with the actual event. You would have thought they’d had this event many many times. I take my hat off to them.

Q: (Leonid Khayremdinov – Red Star) Lewis, you had a wonderful season with this ninth victory and your lead is now 17 points, but I remember this in 2007 and you had the same 17 points behind Kimi Raikkonen. Are you not afraid of repeating the situation as in 2007?

LH: I remember 2007 very well. I wasn’t afraid then either but I guess I was perhaps less experienced so I’m a completely different man today so I’m looking forward to the races coming up.