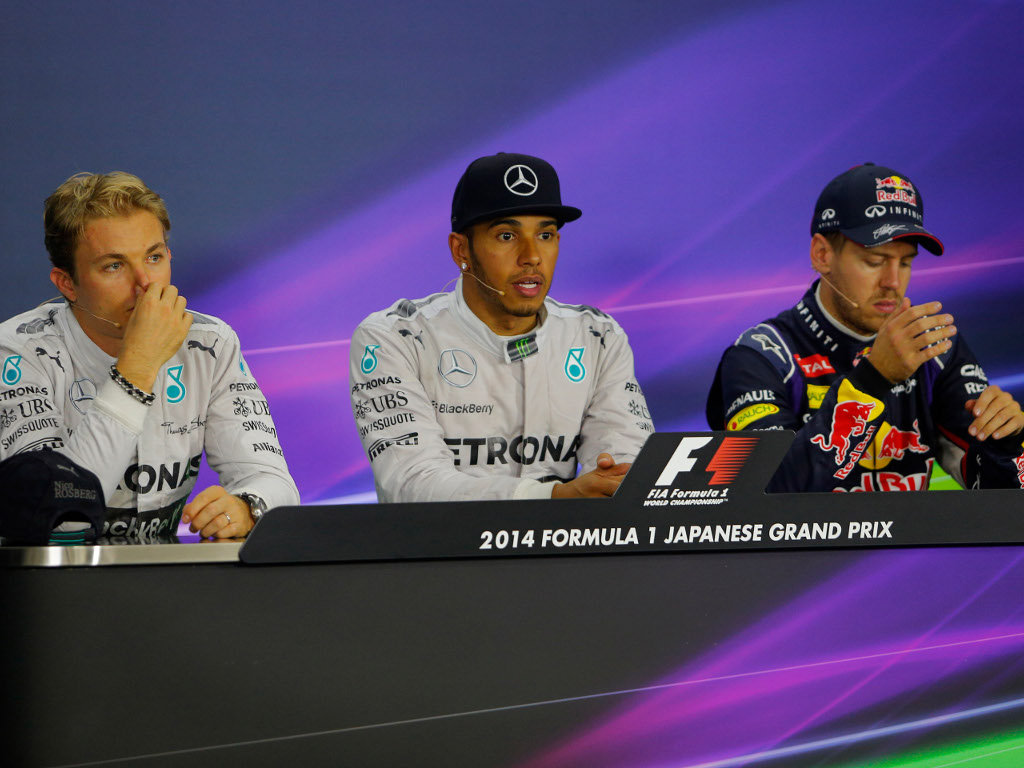 Q: What a race we just had ladies and gentlemen, a very tough one at the office for these gentlemen. Brilliant drives everybody. Lewis, your 30th win, my goodness me, how did you enjoy that?

Lewis HAMILTON: It was great. What a day it’s been. It’s been a very difficult weekend. Today, to be raining so much, it was very difficult, tricky conditions. We hope that Bianchi is OK. But we had a great crowd this weekend, as every year.

Q: Tell us about those hot laps, 15 or 16 laps before the end there. You were putting in some hot laps, a second or second and a half quicker than anyone?

LH: Yeah, I really got into a groove. In terms of feeling it was very reminiscent of Silverstone 2008.

Q: Tell the fans what you really thought when you went off at the first turn when you were really pushing hard early in the race?

LH: I was pushing to get by Nico and I had the DRS open and I forgot to turn it off. When I went into the corner the rear end stepped out. It was very, very close but I saved it.

Q: Well, a brilliant win. Nico, you did everything perfect, great pole position yesterday and then great drive. You were doing all the hard work, acting as the brake, because being out front is difficult isn’t it?

Nico ROSBERG: It’s been a good weekend for us as a team. Of course it’s great for us as a team to get a one-two. And you fans have been absolutely spectacular again this weekend, it’s very, very special to drive here and to really get an impression of the whole atmosphere here. Congrats to Lewis for winning today, of course with my thoughts at the moment with our colleagues Jules, because it seems quite serious, so I really wish him all the best.

Q: As we all do. Unfortunately, we don’t have any news about that at the moment. But brilliant drive and congratulations Nico. Seb, unbelievable drive, you made things very exciting with the Williams drivers, getting on the inside and then the outside. How did you enjoy that today?

Sebastian VETTEL: As they both touched on it was very, very tricky. Took a while to get the race started, waiting for the conditions but then I think it was very good fun. Concentration has to be very, very high when it’s wet; it’s so easy to do a mistake. In the end obviously we pitted, decided to go for fresh tyres, lost one position only. Obviously I got lucky to have the safety car coming before, so I’m quite lucky to be up here. Great race, we seemed to have great at some times as well. Overall, very happy and last but not least best to Jules Bianchi.

Q: Lewis, an excellent race, the right result for you in very difficult conditions.

LH: Yeah, absolutely. It’s been an interesting weekend. Obviously a great result for the team. I think we’re all very concerned about our colleague, Bianchi. Don’t really know what to say. But again, to have the result, this has been a great weekend with the car; qualifying obviously wasn’t perfect for me but generally the car was absolutely fantastic through the race and once I was passed Nico I was able to really manage the gap and enjoy the ride. Obviously didn’t finish the way we would have hoped but really, my prayers are with him (Bianchi) and his family.

Q: A great overtaking manoeuvre round the outside of Nico going down into the first corner; tell us about that.

LH: Fairly straightforward, really. I had a lot more pace than Nico. This is not a very easy circuit to follow but fortunately I was able to get quite close and particularly in the last corner and I think perhaps he had a small oversteer moment out of the last corner and I didn’t. Obviously the DRS enabled me to get alongside. I was fairly confident with the balance of the car so I put it there and stuck it out. And after that it was really about trying to… you know, the whole approach changed after that because I was attacking, attacking and after that, I kind of took different lines and managed it differently. But it felt very reminiscent of a time years and years ago, of 2008, and it was a great feeling in that respect.

Q: And you had a couple of excursions but they didn’t really seem to hurt you at all.

LH: Yeah, I only remember one of them but yeah, I went into turn one with the DRS open and there’s so much less downforce when that wing is open. You’ve got to remember to close it again and then I started to turn and brake and it was still open, so the back end stepped out. It was very very close but yeah, kept hold of it, didn’t really lose too much time so fortunate.

Q: Nico, we heard you talking about a lot of oversteer, is that what the problem was throughout the race?

NR: I was definitely not happy with my balance but I think we had pretty much the same set-up so Lewis must have had the same oversteer. I just wasn’t happy with that and tried to figure out a way to reduce that and found some improvements then with the pit stop, put down the front wing so that was a bit better but still not good so just need to look into that. But all in all, Lewis just did a better job today and deserves to win. OK, second place is damage limitation and taking everything into consideration, it was very very difficult conditions out there on this track and everything so seven points lost to Lewis… you know, there’s worse than that.

Q: Sebastian, a late stop and we weren’t awfully certain if we’d see you or Daniel in here; it was a bit worrying with that late stop.

SV: Yeah, obviously we didn’t know what happened. The safety car came out and I think we were aware that Adrian went off in turn seven and obviously it was difficult to see what happened after that. From a racing point of view, the safety car comes in and we saw that there was quite a good gap and so we decided to pit and lost only one position. Obviously, as it turned out with the red flag, we thought initially we were not on the podium, but as the rules are similar to… I think a little bit of confusion. Five years ago in Malaysia I think we had a similar scenario and we found ourselves back in third. Obviously it was great to be on the podium, this is my favourite track, it’s for sure very nice in those tricky conditions. In the end, I don’t think it really matters. I think the most important thing, as we’re all probably thinking, is that we hope the best for Jules, obviously currently not in the best shape but we hope that we get some very good news very soon.QUESTIONS FROM THE FLOOR

Q: (Michael Schmidt – Auto, Motor und Sport) Question to all three of you: you were out in the last few laps on intermediates as well when the accidents happened. How slippery was it and was it already too wet for intermediates at that period of the race?

LH: For me personally it wasn’t. There was more and more rain coming and you could see the circuit… you started to see more reflections and so you could see that it was increasing – the amount of water that was on the track, but it wasn’t… I didn’t notice any difference so I was still able to maintain the same pace. I would imagine that we would probably have been able to finish on those tyres since there was only ten laps left. Yeah, but the tyres performed quite well today.

NR: Yeah, it was fine but the thing is that we have so much more downforce than some other people, so I can imagine that maybe for them… because it was starting to get a little bit more difficult for us and maybe for them, with so much less downforce, it was already on the limit of needing to go to full wets. That’s very possible and I myself was a little bit surprised to hear that other people were already going for full wets but I guess that must be the explanation.

SV: Yeah, it was borderline. At some stage, towards the end, just before the safety car, it started to rain a little bit less with a little bit less intensity. Also when the race was stopped it was just a drizzle and a couple of laps before it was getting quite bad, that’s why we decided to pit and we decided to go for intermediates again. I think the problem, in general, is that once there is a lot of water, visibility is very poor and once there’s too much water, the inter doesn’t work any more and the extreme wet only has a very very narrow window where it works because also, with a lot of water on the track, water drainage on the extreme tyres is not as good as it probably should be, so that’s why I think the window is narrow and that’s why other people probably decided to pit. For us, I think it was borderline but for sure, the better your car, the better – Nico explained it well – the better it is for you.

Q: (Frederic Ferret – L’Equipe) Nico and Lewis, do you have any kind of explanation of the difference of balance and settings for the car and the difference during the race between the two of you?

NR: We had pretty much the same set-up, so I’m sure the balance was similar for Lewis and I just struggled more with it I suppose: a lot of oversteer and I don’t like that.

LH: Yeah, we had pretty much exactly the same set-up so as Nico said, maybe he took out some wing later on in the race. I didn’t really have any problems with the balance of the car. It was oversteery but it was manageable.