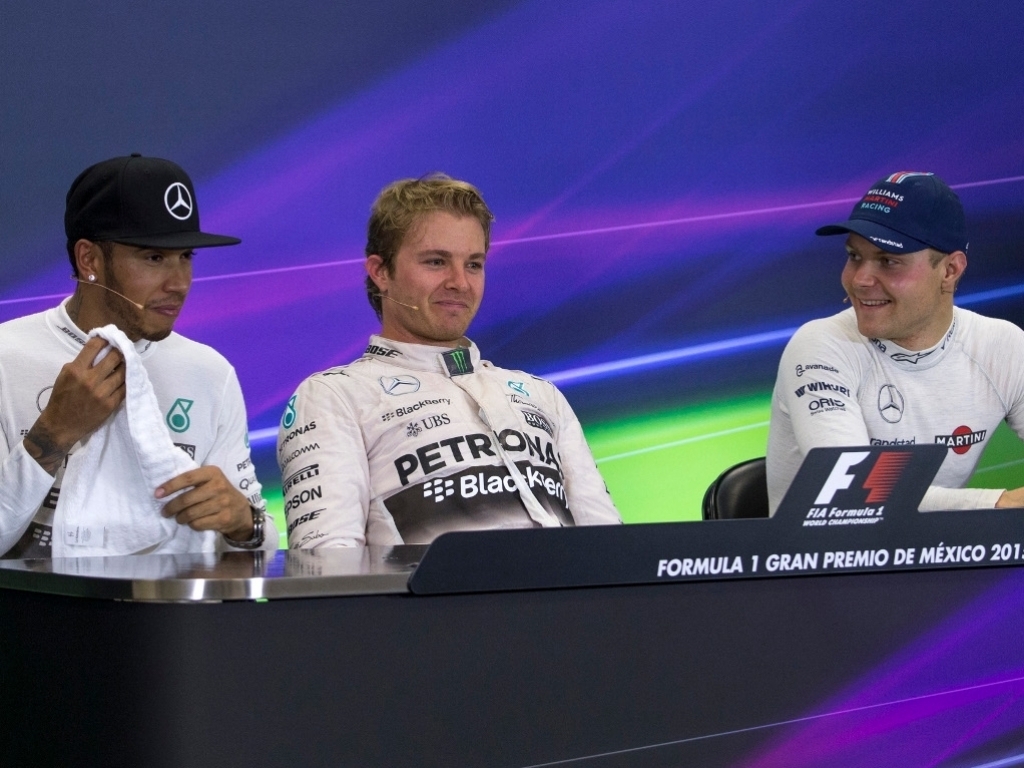 Q: Viva México! What a race ladies and gentlemen. What a brilliant race we had. Can we get the drivers to come down here; get closer to you. We'll talk to Nico. Nico, what a flawless drive. My goodness me, you were probably wondering what you had to do when the Safety Car came out. How does it feel?

Nico Rosberg: Que tal México! Yeah, amazing; amazing day. Great race, great battle with Lewis, he drove really well. Just really, really happy to get the win and this is really the best podium of the year, what a place to do it.

Q: OK, across to Lewis now, ladies and gentlemen. Lewis, you pushed really hard and when the Safety Car came out you had younger tyres, the crew did a brilliant job in the pit stops, you were pushing hard but you couldn't quite do it today.

Q: Well, you're a great champion and I'll tell you, Nico, you've just beaten Lewis absolutely fantastically. Let's go across to Valtteri here, such a well-deserved podium today, ladies and gentlemen, so well deserved. An exciting race, you had a little flirtation with a Ferrari there, what did you make of that?

Valtteri Bottas: First of all, I have to say a big thanks to the team. We did a mega job today. We were racing like a race-winning team, so I'm really proud of that. Yeah, obviously it was not that easy a race, a bit of contact with Kimi. It didn't have to end like that. It was a bit of a shame for me, there was nowhere to go, but that's racing.

Q: But great for you today, a great podium, congratulations. The last word with our winner Nico Rosberg. Nico, the last word's with you.

Q: Nico, you looked in control throughout that race but were there any nervous moments and how much was tyre management an issue? Did you ask for that second stop for safety because of the wear on the first set you changed?

NR: At the time I wanted to do just… I didn't want to come in because I was really comfortable at the time, I had a good gap to Lewis so it sort of reset things a little bit, going on another set of tyres – so I wasn't too happy with that but I understand that it was the better thing to do – especially in light of the Safety Car that came out because it was important to have fresher tyres at that point in time. I'm happy I was able to control the race. The only moment that was a bit difficult was on the restart with the cold tyres – but it was OK.

Q: Lewis, can you just talk us through your thoughts on the team strategy regarding that second pitstop – and did you think you could get to the end?

LH: It doesn't really matter now but good race, the team did a great job, Nico drove really well today, no mistakes, no gust of wind and… yeah, it was very difficult to follow here but what a crowd we had today, it was just incredible. I gave it my all, it was quite fun actually just to be able to push and not really have to be worrying about points or anything like that. Just go out and just race. That was one of the fun races for me.

Q: Valtteri it was a very eventful race for you. Hard-earned third place. Can you talk us through it and also tell us your thoughts on that moment with Kimi?

VB: Yeah, overall really good race, plenty happening but it ended up well. First of all I have to say a big thanks to the team. I think as a team we did a great job today, especially with the strategy. The guys were really on it, so really pleased with that. Obviously from the start, the first corners were quite tricky but managed to gain some places as well as further places during the race. The latest one with the Safety Car restart with Daniel. There was the contact with Kimi. We had a contact in Russia but this was just unlucky that we got together again. I was trying to overtake him in Turn Four-Five and there was just no room when I was inside into Turn Five and then we collided – which is a shame because it didn't have to end up like that but for me, I had no space to go. So, yeah…

Q: (Dan Knutson – Honorary) Valtteri, as you say, two clashes with Kimi in the last few races. Is it time for you and him to sit down and have a bit of a chat?

VB: I don't know if there's anything to really speak about. For me, we were racing hard, obviously, and normally, what I'm used to in those kind of situations, there is enough for two cars when you go into a chicane like that but this time there wasn't. And of course I'm not going to back off, I'm fighting for the positions. I was calculating the risk, I think there was a decent possibility to get through. But, hey, it ended up like this. I don't know if there's anything really to speak about. Unlucky that it was us two that collided again.

Q: (Livio Oricchio – Globo Esporte)  Lewis, were you on the limit during the race or the fact that you won the world championship in the last race, maybe you didn't give that extra power that you normally use during the race?

LH: Not at all. I was pushing the whole way it's just that you can't follow. Soon as I'd get four, five, a few car lengths behind, just to lose the aero, and he had perfect aero so it was impossible to get close enough but I had good pace – but as soon as you get closer and closer and closer you lose all your downforce, so…

Q: (Ricardo Roura – Reforma Cancha) For all three drivers, your opinion of the Mexican podium this afternoon.

NR: The Mexican podium? It's the best podium of the year, I think, to be in a stadium like that and the atmosphere and the energy was just unbelievable, so I'm really thankful to all the Mexican people and to all the people that have been here today, for the massive support also. Really special.

Q: (Christopher Joseph – Chicane) All three of you have mentioned the stadium and mentioned the crowd; is there a real feeling of energy as you enter that section of the track, and does it give you a lift?

NR: During driving it's really difficult because I'm just so focussed on what I'm doing, I don't look around, so it's more after the race and after qualifying when I'm aware of that and take it all in because it's just unbelievable.

VB: Yeah, I agree. When you drive here, you don't really look around but after the race you have the time and I was lucky enough to be on the podium, because it was incredible really, just got goosebumps and everything, it was pretty special and I think the best drivers' parade I've ever had as well and really a lot of support from the fans.

LH: It's the most incredible thing I've ever seen; in the whole entire time I've been in Formula One, I've never seen anything like it, this crowd.

Q: (Dan Knutson – Auto Action and Speedsport Magazines) Valtteri, on that last restart, you were on the medium tyre whereas Daniel was on the softs. How difficult was that and how did you set that up, for the pass?

VB: Well, I think it was a really good call from the team; they knew that I would come back after the pit stop in the same position than before the safety car. And why we opted for the medium was that it is a lower working range tyre, it works better with lower temperatures so it seemed to work. I saw Daniel sliding in the last corner and I managed to get really close and then got through.

Q: (Eduardo Polaco – AutoBild Mexico)  Did you feel the track different from practice because some of you said that it was very low grip at the beginning, so was there a difference?

VB: Yeah, I think it was improving on every lap during the race, actually, so the lap times were getting quicker and quicker so every session, every lap of the weekend so maybe next year we actually have some more grip which would be nice.

LH: I think they should make special tyres for this race. We need more grip.

NR: Well it's normal, you know, a new track, it takes a bit of time because the asphalt is just so smooth so it's the normal story like we've seen with most of the new tracks lately. It's just one of the challenges that we've had this weekend but it's all good, you know, and it's been a great track, they've done a great job with it, so I think the whole race has been an amazing success for F1.

LH: It was fairly easy, it was fairly easy. There was not really much degradation on tyres, if any, and the brakes, yeah, you just have to do a little bit of lifting and coasting but it's no different to anywhere else.

NR: No, the team did a great job so we were fine. There's been other races that were more critical; today was no problem.

VB: Yeah, not a big problem. I think if we would have been following other cars for a long time then maybe but all good.

Q: (Livio Oricchio – Globo Esporte) Nico, your start was decisive for your winning. In the last few races you didn't start well; can you describe your procedure of starting?

NR: Well, it's just like everything else. I've been working on it to try and get everything perfect and today it worked out to be first and that was important, maybe the most important part of the race, so I'm very happy about that.