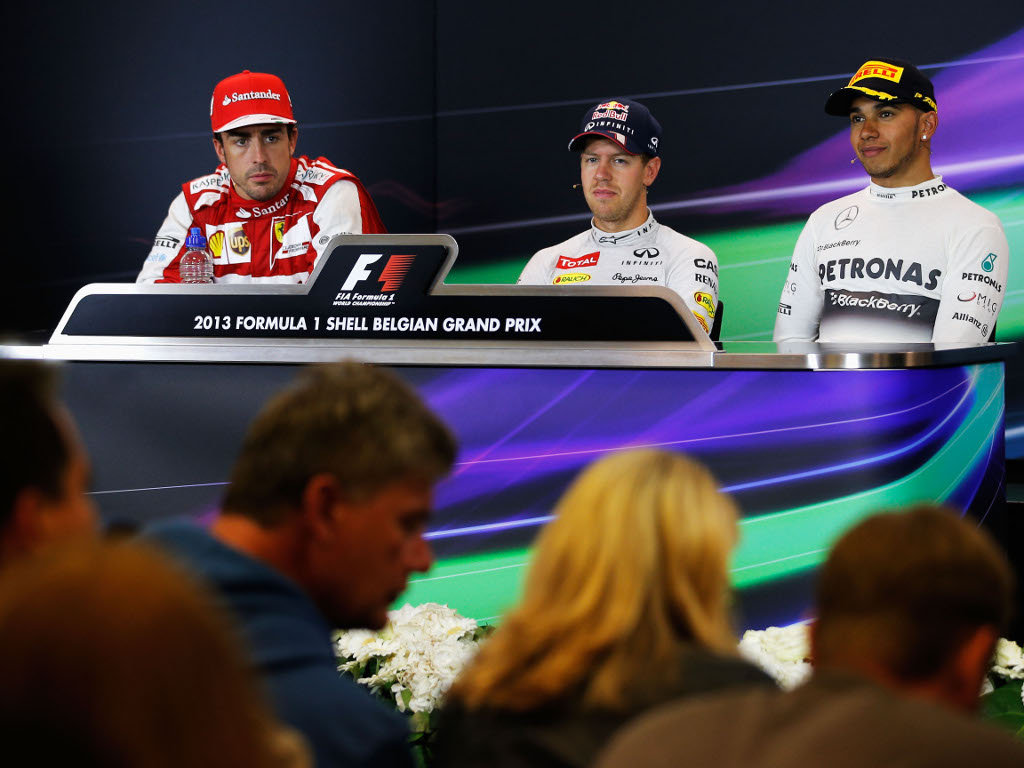 Sebastian Vettel, Lewis Hamilton and Fernando Alonso spoke to the media on Sunday…

Q: Sebastian, your 31st career victory – two less than Fernando – and your fifth this season. Clearly the decisive moment was the opening lap of the race. Tell us about that and how it set you up for the rest of the afternoon.

SV: Yeah, obviously very difficult around here to plan your start because first of all you need to have a good launch off the line and then there’s a long straight coming. A bit like Korea. I tried my best to line up behind Lewis and basically benefit from a massive tow through Eau Rouge. I think especially in the opening lap when the tyres are not yet completely there and the fuel tank is full, Obviously the cars are quite heavy up the hill and produce a lot of drag and I was able, in the tow, to make up a lot of speed and when I got side by side I had a lot of advantage over Lewis and was able to get straight ahead. So, yeah, it worked very well, what I was trying to, let’s say, plan at the exit of turn two. And after that I just tried to settle into the rhythm. I tried to open a gap to be flexible at the first stop and yeah, until the end we had incredible pace. We didn’t expect that. We knew, probably, going in that, in the dry, we should be able to beat Mercedes on the track but we knew other cars – Lotus, Ferrari – they looked very competitive in the dry, so in that regard yeah, we had massive pace and could control the race until the end.

Q: You’ve increased your championship lead as well, now over Fernando, almost two race wins clear. How are you feeling about it at this stage?

SV: For sure a positive message today but I’m honestly more happy to win the race today: it’s a fantastic track and especially when the car works well, you don’t want the race to stop. The car is getting lighter and lighter and I was very comfortable at the end on the Primes. The car, as I said, was just a pleasure to drive. You don’t… I didn’t think about the championship or points. Obviously I know the higher up you finish the better it is: ideally ahead of everyone else, which worked today. But yeah, such a great circuit. We’ve had good races here in the past so it’s nice to have another one, another great memory today. So, that’s what honestly I was focussing on most. For sure, regarding the championship, it’s a bonus.

Q: Fernando, obviously for you also the start was pretty decisive. Ninth on the grid, up to fifth on the opening lap. You passed Rosberg, Webber, Button, Hamilton to come through to second place. That’s quite a recovery from what must have been a very disappointing qualifying performance yesterday.

FA: Yeah, I think the weekend was more or less good for us with recovering some feelings that we lost in July with the car especially. We were a little bit more competitive – or we felt a little bit more competitive this weekend. Not for sure maybe for pole position but to be in the first four or five positions on the grid, maybe that was possible but yesterday I think were extremely unlucky with the situation in Q3 with weather and the track: where we were, in the place we were, at the time we were was wrong. So, unfortunately some times in these changeable conditions you are lucky, sometimes unlucky. I remember Malaysia very well in Q3, we were in the right place in the right moment and we were second and third of the grid. Yesterday was a little bit the opposite. So we had to plan a perfect race from the start to the pace of the car, to the strategy and everything worked fine and we could recover some places and extremely important for the championship also to get some good points again after three races not so good.

Q: Lewis touched on it yesterday in the press conference here, that throughout the practice and qualifying as well the Ferrari looked quite quick and looked like it had taken a step forward. Do you feel that over the course of this weekend? Is that giving you encouragement? Obviously we’re going to some very different kinds of circuits in the next few weeks but are you taking encouragement from this weekend?

FA: I’m happy. I’m happy with the feeling that I had this weekend. I’m happy with the parts that we brought here, seems that they are working fine. We need to take things very carefully because, as you say, this is a very specific circuit and we are not first and second in any practice or any qualifying or any race. We are ninth and tenth in quali and now we are second and seventh in the race. At the moment it is still work to do.

Q: Lewis, great getaway from pole into the first corner but describe the remainder of that first part of that first lap from your perspective.

LH: It was not particularly exciting or anything. It was pretty straightforward. Half-decent start and I felt like I got a good exit out of turn one but these guys… Sebastian just caught me massively, particularly through Eau Rouge. There was no defending really. I could only move once, so I moved once and just had to watch him glide by. After that it was very, very difficult to hold onto him. And also when Fernando came by, particularly down the straights, he was just pulling away.

Q: At one point on the radio you were saying “I’m getting everything I can out of the car.” Obviously finishing around 27 seconds behind at the end of the race. Is that a concern for you, given the way you translated pole to victory before the summer break?

LH: Not really. I think every year you come here – here and Monza – you come with a new package, new front and particularly rear wing and sometimes you hit the nail on the head and sometimes you don’t. I think we’ve done a decent job but obviously these guys have done a slightly better job. Whether or not we can make an adjustment before the next race, we’ll wait and see but I think more importantly we’ll be back to being very competitive – or more competitive when we get to Singapore.