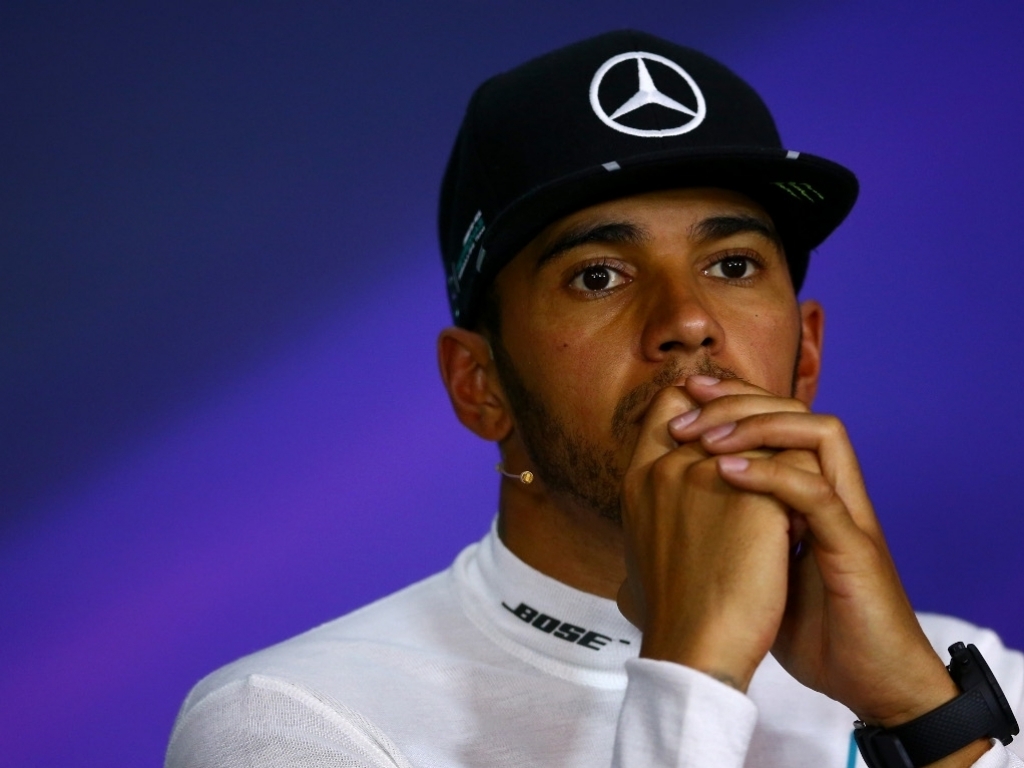 The top three finishers of the USA Grand Prix.

Lewis HAMILTON: How are you guys doing! What an incredible crowd we have here. It’s you guys that make this race so special. Thank you for so much for coming out.

LH: I feel OK. This has always been a good hunting ground for me. I love being here in the States. It very much feels like home and, as I said, we have had some incredible support this weekend, which I’m so thankful for. So a big, big thank you to everyone and the team did a great job this weekend to put us both up there and I’m very proud to be a part of it.

Q: So you’ve won, what is that, four times here now, five times in America, you love this track, and it’s your 50th grand prix win! One off Alain Prost – amazing.

Q: [Nico] How do you doing? How are you feeling, talk us through it, an unusual opening?

Nico ROSBERG: Yeah, I mean I lost out a bit at the start unfortunately, then gave it everything to come back. Second place is OK, it’s damage limitation here today of course. I wanted to win here in America, that would have been awesome, but it wasn’t to be. Next time, maybe.

NR: No, no, definitely not. Flat out all the way to the end.

Q: Daniel! I hope you’re going to speak to me not in your Aussie accent. I’m a Red Bull man so, like you, I’m very happy. What a great start.

Daniel RICCIARDO: Thank you very much. I hear Mr Butler does not drink alcohol, I respect that completely – but I believe he’s going to drink some Red Bull out of my shoe right now. The race wasn’t that exciting but hopefully now…

Q: I did not… Listen, I love Red Bull but you’ve got to be kidding me! I hate you… actually quite tasty…

DR: Thank you very much for that sir. That was an absolute… display.

Q: I though you did absolutely fantastic. Tell us a little bit about the start for you

DR: This is quite overwhelming. So yeah, the start went nearly to plan. The start was OK. The plan was to try and get both Mercedes. We at least got Nico, which was a positive. Then we were looking like we were holding second quite well and then the Virtual Safety Car. It is what it is, it’s a bit of a frustrating one sometimes. Nico was able to jump me through that procedure. Bit of a shame obviously. I think we would have had a good fight at the end, so sorry about that but a bit out of my control.

Q: OK Lewis, gloves are off.

LH: How did that taste? Bit of toe-jam and Red Bull?

Q: Well Red Bull’s quite a powerful drink – so fortunately I could taste mostly the Red Bull.

Q: So, gloves are off, what are you feeling now. You’ve tightened it up a bit…

LH: All I can do is do my best and continue to drive as I have this weekend. Nico’s been driving fantastically well all year. So the battle will continue – but I know we’ll have all this support that will continue as well. So please keep your fingers crossed guys

Q: Are you going to take him?

Thank you guys, thank you very much.

Q: We’ve got to talk about this milestone: fifty Grand Prix victories. Only two men have ever done it before: Alain Prost and Michael Schumacher. You must be so proud.

LH: I had completely forgotten that it was going to be the fiftieth. It’s been a long time coming. Once again, and I know I’ve mentioned it before but I’ve been here for ten years, I’ve had lots of ups and downs and lots of great opportunities to work with some incredibly gifted people who have helped me get here today. Then my family as well without whom I wouldn’t be here today. It’s kind of very surreal, for sure. I can’t believe that there are only three of us but hopefully onto bigger and better things.

Q: It was important today that it went this way for you because if it had gone the other way it would have been forty points with three races to go, which would have looked a bit of a tall order. It was interesting to see you on the grid though, you looked extremely relaxed. Why was that, why were you so calm going into this race?

Q: Nico, we’ve got to talk about the start You got away well, you went across to the outside and Daniel came up the inside. Talk us through it.

NR: Yeah, got away really well. Not quite enough to give it a go down the inside so Lewis would just have closed so no point in trying that so just went round the outside. All was looking good, actually, I just struggled for a bit of grip then out of the corner and Daniel had that extra grip and that’s it. We knew that that was going to be a risk with that supersoft. Then flat out after that and it worked out of course with the VSC.

NR: Yeah, I felt really good out there in the car, we found a great balance and I was feeling really comfortable  and so I was just able to push really well and so that was a good feeling, yeah.

Q: Daniel, we’ve got to talk about the start. From your perspective, were you a bit surprised Nico went to the right? How did you read it and talk us through how you got ahead?

DR: Yeah, I think the actual launch itself didn’t seem that much stronger than the Mercedes on the soft tyres so I was hoping it would go a bit better but then, yeah, Nico opted to go to the outside so I had some room on the inside there. Yeah, I got one at least. I was obviously hoping to get two but that was better than nothing and then yeah, I think the first part of the race we sort of just seemed to… everyone just seemed to have similar pace. I guess Lewis was probably controlling it at the front but we seemed at that stage to be able to hold on to second and then the virtual safety car, I think we lost ten seconds it worked out to be, with Nico. I believe after the pit stops we would have had about five seconds on him. And then after the virtual safety car he had close to five seconds on me so that was frustrating, I guess. It just would have been interesting, even if he caught me at the end, just to at least have a fight. I think the race, after the virtual safety car, became a bit… not that exciting. I guess without it it would have made it a bit more spicy at the end. That was that. Unfortunately third was the outcome but it was still nice to be on the podium. It’s a cool place, I’ve always loved it here for everything: the anthem before the race kind of gives you goosebumps and then the crowd… obviously on the podium is pretty cool. It’s been a good weekend.

Q: Does it make it worse that the virtual safety car was actually triggered by your own teammate?

DR: Absolutely sir. When I saw Max out there I thought ‘ah, hell. My boy’s done it again!’ So anyways, that was a devastational moment but we’ll keep soldiering on. We still got some points over Ferrari today so I’m pretty pleased with that.

Q: (Dan Knutson – Auto Action and Speedsport) Daniel, what are your thoughts regarding the upcoming three races if you can get close to these guys again?

DR: We’ll try. I think looking at it, on paper I would say Abu Dhabi is probably where I fancy my best chances. It’s been a strong circuit for me and I think us as a team have normally been pretty good there so that’s probably one. Mexico is still new. I think the surface is going to be a lot different when we go there next week, it will be more rubbered in. I think it’s going to be a completely different track to last year and we will see. Brazil, it’s been a while since we had the sort of magical Brazil downforce so maybe we can get one of those this year and have a chance. We’ll keep trying, keep doing what we can. Obviously they’re hard to beat but maybe next time the virtual safety car will help us out. We’ll see.

Q: (Seff Harding – Zero Zone News) Nico, you put in another one-two for Mercedes; do you feel like you’ve lost any momentum after this race this weekend, heading into Mexico?

NR: I just feel that it’s a pity that it didn’t work out with a win this weekend. I was going for that. It would have been awesome here in America but it didn’t work out. Lewis did a great job this weekend, all the way through, qualifying and race so it just wasn’t to be. I’ll live with second place now and next race is another great opportunity.

Q: (Livio Oricchio – Globo Esporte.com) Lewis, there’s no way not to question the mathematics of the championship. To Nico, two second places and one third would be enough to be champion. Do you think about it and what can you do to maybe change it or are you just going for the races and trying to win?

LH:  Honestly, I just focus on doing the best job I can. Honestly today, beyond doing the job… I felt comfortable doing the job, I was just the whole race concerned the car was not going to make it so right, I’ve been told the line, I was just in fear of the same thing, the same feeling, the sound that I heard in Malaysia, so I was grateful that the car made it across the line and I have a lot more confidence in his reliability. It’s going well for him. I’ve just got to continue to do my job and hope for the best.

Q: (Laurence Edmondson – ESPN) Lewis, having Daniel put a bit of pressure on Nico through that race, does that give you some extra hope that maybe the Red Bull will be able to finish between you and Nico and give you a better chance of taking this championship?

LH: I don’t really think about that. I just kept focusing on doing my job to the best of my ability. I can’t control what’s behind and there’s no point in even hoping for anything, just hoping to do the better job on the weekend and have more weekends like that. That would be great.