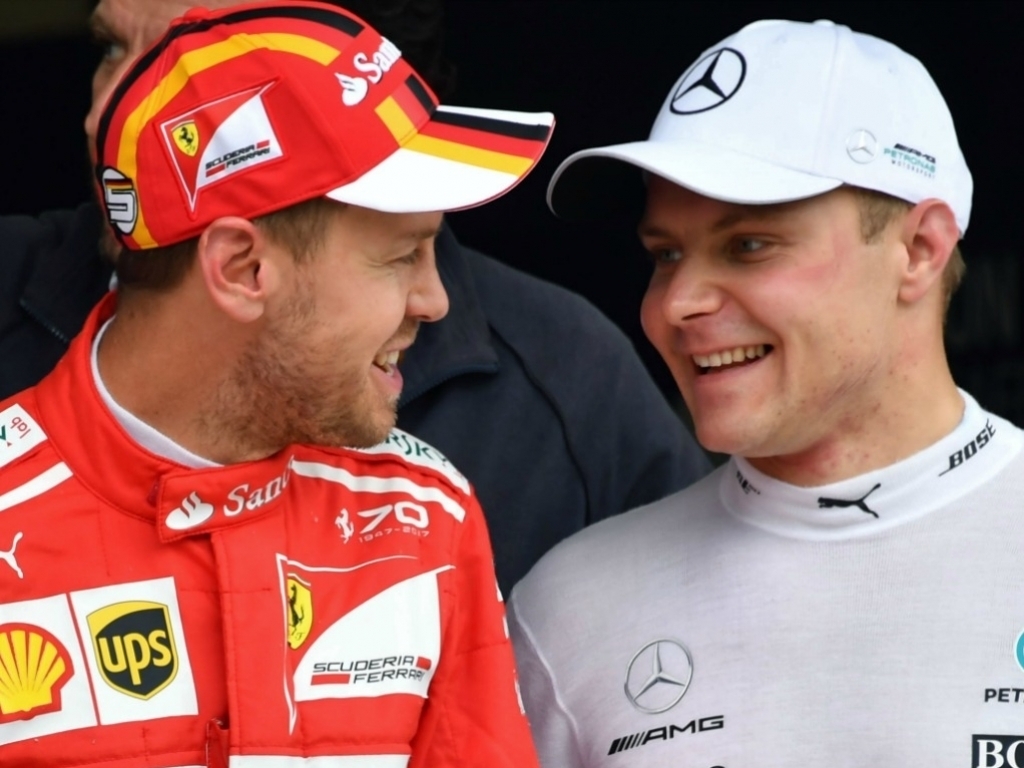 The season ended with a victory and a TMW’s point for Valtteri Bottas while Pascal Wehrlein’s point doesn’t look as if it will be enough to secure his F1 future.

Mercedes
Hamilton 15 – Bottas 5
Race: Bottas
He said after his Championship win in 2015 that he wouldn’t let it slip – and he let it slip. These last two races have gone to Valtteri Bottas who has been under pressure to match Hamilton, mostly due to the fact that Daniel Ricciardo becomes a free agent at the end of 2018.

This Bottas did in Brazil and even more impressively in Abu Dhabi. When it counted in Qualifying Lewis came up short, and there is too limited a run to Turn 1 at the Yas Marina circuit to overturn pole unless the polesitter has a clunker of a start.

Hamilton’s end-of-season tail-off (now that it’s been repeated) will be cited in many years to come when people get together to discuss the greats and greatests of F1 drivers. You cannot imagine Lewis battling hard for P9 in a McLaren-Honda, or its equivalent, four years down the line.

Ferrari
Vettel 12 – Raikkonen 8
Race: Vettel
Raikkonen was curiously off Sebastian Vettel’s pace at a track where he normally excels. We all remember, “Leave me alone, I know what I’m doing.” I, among many others, have the T-shirt. It never fails to amuse my boss. That win for Lotus was at Abu Dhabi, one of the most riveting ends to a grand prix you can wish to imagine. Like last year when Lewis backed up the front of the race, ignored team radio requests to speed up, and put Nico Rosberg on the edge of a nervous breakdown.

But the problem with Yas Marina, is that it is too difficult to overtake, and a season finale shouldn’t be a procession predicated on the need for someone to make a mistake to shake some action. The two Red Bulls closed on Raikkonen in turn, but no way were they ever going to be able to get past.

Sebastian Vettel was looking at the long game and wondering how Ferrari could improve at a track where they have never won. The irony being that the circuit is sat next to the biggest Ferrari exhibition space in the world. Abu Dhabi’s Ferrari World is surely bigger than Maranello, so it’s like Ferrari can’t win at Fiorano.

Red Bull
Max Verstappen 14 – Daniel Ricciardo 6
Race: Ricciardo
The malaise that set in in Brazil continued at Abu Dhabi, especially for Max Verstappen. Given that the Monaco-like section of the track should have suited the Red Bull Renault (now happier at sea level) only Daniel Ricciardo threatened to get in amongst the Ferraris and stay there. And then his hydraulics decided they’d had enough. Max soldiered on, presumably thinking about what other more interesting things he might be doing other than driving a grand prix that had all the thrill of a simulator.

Force India
Sergio Perez 11 – Esteban Ocon 9
Race: Perez
We have a go at Romain Grosjean for moaning all weekend long, but Sergio Perez had a justifiable gripe in the race. Nico Hulkenberg nicked a place off him and should have given it back. At a circuit  where track position is everything, a five-second penalty imposed many laps before a pit-stop is something that can be earned back in track time.

Had Lewis Hamilton known that the tariff was set at five seconds, maybe he should have driven straight across the run-off the moment he got onto the gearbox of Valtteri Bottas. Maybe that’s something they should programme into teams’ race computers, as they do the pros and cons of stopping for tyres during a Safety Car period.

Unless he was onto a big points bonus from Force India, Perez will have been pacified by the fact that he finished in front of Ocon in a race where they were both technically off the leash. After Hulkenberg came out in front after the pit-stops, you got the impression that Sergio was probably looking more at the gap to the car behind him (Ocon) than the car in front.

Williams
Felipe Massa/Di Resta 16 – Lance Stroll 4
Race: Massa
To be honest I haven’t listened to many of Lance Stroll’s radio messages this year, and maybe it’s because I know his father (who blocked Lando Norris’s move to the Prema F2 team, who have run the victorious Charles LeClerc this year) has pumped millions into the Williams team, but he sounded a bit demanding on team radio at Abu Dhabi. My car’s wrong, fix it. “Dad!”

Stroll had no real answer for his lack of pace and while team-mate, the presumably-not-taking-too-many-risks-at-his-last-race-thirty-something Felipe Massa made it through to Q3. Lance was out in Q1.

McLaren
Fernando Alonso/Button 17 – Stoffel Vandoorne 3
Race: Alonso
Fernando Alonso worked extremely hard to campaign his McLaren-Honda to P9. While Vandoorne was complaining that his car had so little grip it felt like rallying, El Nano got on with the job. To see a McLaren-Honda pass a Williams-Mercedes on a long straight was a sight that we had to wait three years for. And we won’t see it again.

Toro Rosso
Carlos Sainz 11 – Daniil Kvyat/Pierre Gasly 5
Kvyat 1 – Hartly 0
Hartly 3 – Gasly 0
Race: Hartley
The Toro Rosso garage in Abu Dhabi was more like an episode of Scrapheap Challenge as the team cobbled bits and pieces they found off old vacuum cleaners and spin-driers to get the cars on the grid and finish the season. Pierre Gasly made a worryingly innocuous mistake while running in P14, letting both Hartley and Magnussen through. Right now, neither of the junior team drivers look capable of matching their illustrious predecessors: (Vettel, Ricciardo, Versatppen and Sainz).

Haas
Romain Grosjean 11 – Kevin Magnussen 9
Race: Grosjean
Kevin – suck my Mintoes – Magnussen had an unruly start to his race. Forced wide by an inexpert attempt to make up places round the outside of Stoffel Vandoorne, he rejoined by just barging his way back onto the track and was skilfully avoided by Lance Stroll. He then spun the car and started back after the rest of the field, plain last.
His team-mate also had fun with Lance Stroll in a ballet sequence of overtaking moves where the rookie certainly held his own as they passed and re-passed each other. Grosjean took the honours.

Renault
Nico Hulkenberg 15 – Jolyon Palmer 1
Nico Hulkenberg 2 – Carlos Sainz 2
Race: Hulkenberg
I have to confess, dear reader, that I watch other sport, not just motorsport. And when I watch American Football I always feel sorry for the kickers who miss crucial field goals. Often it may not be the kicker’s fault, it might be the center who snaps it back too high, or the guy who tees it up badly, but if the kick doesn’t go through the uprights, the locker room becomes a lonely place for the smallest guy on the field.

Thus, when Nico Hulkenberg came in for his one and only pit-stop, racing for a place that could be worth $9m, and the guy on the right rear failed to remove the tyre properly, I felt for him. There was one tiny mistake everyone could point to as the reason they didn’t get their Christmas bonus at Enstone. No matter that others might have made mistakes all season long, that was going to be the moment everyone remembered. (For BBC viewers of a certain age, the Michael Fish moment)

Luckily, Hulk managed to get back out in front of Sergio Perez and his car lasted till the end of the race. And the cement of a points-finish for Carlos Sainz wasn’t needed. Carlos may have lost his left front wheel, which wasn’t seated properly at his pit-stop, but had Hulk exited the race and the Spaniard climbed past Alonso and Massa, it’s unlikely he would have got any higher than 8th.

Given Renault’s ongoing worries over reliability, those laps between the pitstop to the finish must have seemed like years. Watching on television it seemed like years anyway. Hulk re-established his position as the fastest Renault driver, but next season might be extra-problematic with all the weight of the halo.

Sauber
Marcus Ericsson 2 – Antonio Giovinazzi 0
Marcus Ericsson 7 – Pascal Werhlein 11
Race: Wehrlein
As Toro Rosso have cascaded towards the back of the field, suddenly Sauber have found themselves someone to race. Wehrlein managed to put significant daylight between himself and Ericsson this race, and with George Russel emerging as a likely reserve driver for Force India next year, the DTM looks to be beckoning for Pascal.

Star of the Race: Nico Hulkenberg
Overtaking Move of the Race: Romain Grosjean on Lance Stroll. It took a few laps, and Lance managed some racecraft that belied his rookie status, but the magnificent thing was, they didn’t touch once. Now imagine that with Kevin Magnussen…
The Maldonado Award: Kevin Magnussen
The Last Word: Channel 4 commentator David Coulthard talking freely with Mark Webber (surely no better TV duo in F1) in the paddock after the race about the driven, yet moody nature of Fernando Alonso. Mark and Fernando are good mates so Webbo could slip things in like, “he can be a bit of a monster sometimes.”
David Coulthard: “Yes, you wouldn’t want to be camping next to him on a dark night.”