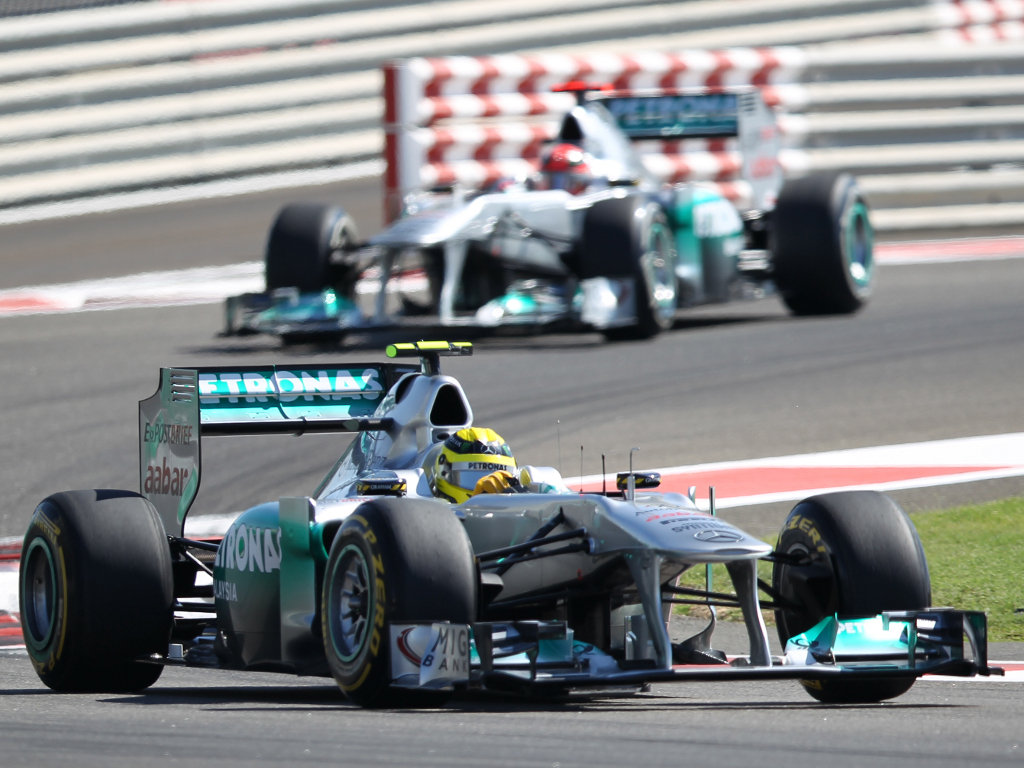 Nico has clinched the intra-Mercedes battle, while Seb and Fernando go sailing on unassailed

In F1, the first person you have to beat is your team-mate…

McLaren
Season: Hamilton 8 Button 10
Race: Hamilton
After another altercation with Felipe Massa in India, Lewis wasn’t taking any chances and brought his mum to this GP, just in case. It went part of the way to creating his ‘happy bubble’. Both Lewis and Jenson did impressive jobs. Hamilton controlling the race from the front, Button playing ‘guess how much braking I’ll have at the next corner’ thanks to his KERS failure.

Red Bull
Season: Webber 2 Vettel 16
Race: Vettel
Pirelli say it wasn’t a structural failure on Sebastian Vettel’s rear tyre, so whether some of the bodywork was rubbing or it got too hot on the grid, or the load on full tanks was too much for the tyre and Red Bull were running it too far under the recommended pressure… even if the team find out they’re probably not going to say. Seb picks up the TMW points because yet again he qualified in front of his team-mate and exited the race thanks to a technical failure. Mark Webber made one fair pass on Button and one that was close to a puncture/lost McLaren front wing.

Ferrari
Season: Alonso 16 Massa 2
Race: Alonso
A sublime performance from Fernando Alonso that started off with yet another banzai first lap. Alonso can overtake people the old way – without aids, drafting behind Button and then going the difficult way round the outside of Jenson into Turn 8/9. Now that’s what I’m talking about. It would have been the pass of the race if not for Kobayashi’s opportunist move later in the race. Massa had less distractions than of late but still managed to contrive a harmless spin on tyres he was still getting to know. It didn’t lose him a place, but following two broken suspensions on two kerbs at the Buddh circuit it was still an extra question mark he didn’t need.

Mercedes
Season: Schumacher 8 Rosberg 10
Race: Rosberg
Nico’s done it. He’s got the official TMW victory – in qualifying terms it’s something like 15-3, but Michael has made up 42 places from his starts this year without going backwards, while a few of Nico’s have been poor. Some might say Michael started well because he’s always starting with cars that are slower than him. (These people wouldn’t have the surname Foster). But he’s also started a lot of races surrounded by a bunch of cowboys and managed to wriggle clear, even if they caught up with him and ran over his wing later in the race.
Abu Dhabi showed a feisty Rosberg who again got embroiled with his fast-starting team-mate but managed to put some manners on him later in the first lap. From that pointon it was clear that Nico is a lot faster round the Yas Marina circuit than Michael and got very close to Massa by Lap 55.

Renault
Season: Heidfeld 7 Petrov 10 Senna 1
Race: Petrov
Having returned to F1 so well, Bruno Senna hasn’t had the impact he would have liked, especially in the last few crucial races where 2012 is being discussed. Gold-plated 2012 returnee Vitaly Petrov got the advantage at Abu Dhabi while Senna attracted the ire of a particularly benign bunch of stewards for not looking at the blue flags.

Williams
Season: Barrichello 9 Maldonado 9
Race: Barrichello
Rubens drove a storming drive to finish just outside the points. Indeed the Williams car in the hands of Valtteri Bottas looks remarkably quick round Yas Marina finishing up fourth quickest on Wednesday. Maldonado couldn’t qualify well, but Rubens would probably have got into the points had his engineers been able to fix the Saturday oil leak. Only one more race to go for the Cosworth and very likely Rubens too, and there’s a glimmer of hope in my heart that Williams will do well in Brazil because Hulkenberg got the pole last year. Even Michael Schumacher will be rooting for Rubinho at Interlagos.

Force-India
Season: Sutil 8 Di Resta 10
Race: Sutil
Di Resta lost out in qualifying after getting blocked by Schumi in Q1 and having to use up a set of Options to be certain of getting through to Q2. The balance of fortune was weighted against him after that as Sutil had a set of tyres for Q3 and he didn’t (even though, bizarrely, Paul only ran a single set of Options in the race). Di Resta had some good battles out on track nevertheless.

Sauber
Season: Perez 9 Kobayashi 8
Race: Perez
Perez and Kobayashi both had strong races, but it was a joyous return to form for Kamui who got into the points and hurled his car into some unlikely overtaking manoeuvres.

Toro Rosso
Season: Buemi 8 Alguersuari 10
Race: Buemi
Buemi was on a charge when a lack of hydraulic fluid in his car meant all those little niceties like gear-changing went straight out of the window. He was in a strong position having just overtaken Paul Di Resta and had he lasted the distance he would have denied Sauber the point that now takes the Swiss team in front of them.

Lotus
Season: Trulli 6 Kovalainen 12
Race: Kovalainen
Lotus mixed it with the midfield again, Kovalainen running as high as 14th on Lap 23 with one stop to his name. Tony Fernandes may have accepted a cash settlement for giving up Team Lotus, but with a planned move from Norfolk to the old Arrows factory at Leafield, he’s still going to be a thorn in Lotus-Renault’s side. Leafield must be the closest F1 factory to Renault at Enstone, so he might start tempting some of the experienced guys away.