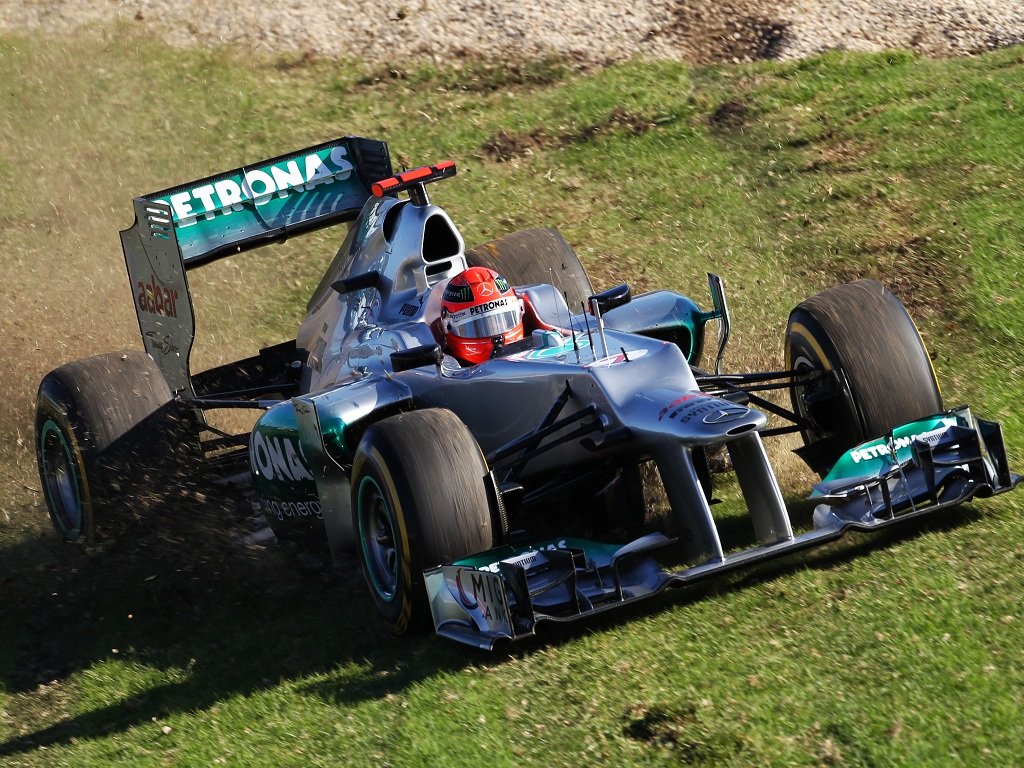 Of the six World Champions on the Melbourne grid – only one failed to beat his team-mate. But then again he’s a World Champion too.

Red Bull Racing
Race: Vettel
Season: Sebastian Vettel 1 – Mark Webber 0
The fact that Mark could outqualify Sebastian again seems to add weight to the theory that Webbo does indeed like the RB8 a lot more than the RB7 (He’s said it, but that’s the kind of thing you say pre-season). And he’s lot more confident in it. Apart from when the lights go out. This sets us up for quite a season, because Vettel’s unchallenged dominance last year was exacerbated by Webber’s failure to get to grips with his car and take points off him. Malaysian qualifying should be very interesting.
What Christian Horner said after the race was not sour grapes, it was a fair point – the Albert Park track doesn’t have a lot of fast, aero-sensitive corners, and McLaren are usually good at point-and-squirt street circuits. Martin Whitmarsh says they’re better at speedy corners now. That may be so, but we can still regard the Aussie GP as the Foreword to the book; Chapter 1 starts next weekend.
Vettel had a great race, crucially getting past Nico Rosberg early on with an overtaking move that was among the best. All four drivers swapped fastest laps in the final 17-lap sprint to the flag, so he’s not going to have it all his own way this season.

McLaren
Race: Button
Season: Jenson Button 1 – Lewis Hamilton 0
Almost all of last year Jenson spent his grands prix recovering from poor qualifying or a bad start and trying to make up ground. This was an entirely different race pattern for him. This was back to the Brawn team of 2009 where he got a great start and set the pace in the grand prix. He seemed to be able to set successive fastest laps at will and only eased off to save tyres and fuel. Apart from the dodgy moment when McLaren left him out on track too long before the first tyre stop it was a commanding display. It’s not surprising that Lewis looked so glum, he was comprehensively outdriven. Reinstated girlfriend Nicole Scherzinger and mum Brenda were sat together in the McLaren garage watching their boy fail to reward his happy bubble… I wonder what Brenda thinks of Nicole…?

Mercedes
Race: Schumacher
Season: Michael Schumacher 1 – Nico Rosberg 0
A stirring performance from Schumi – qualifying in front of both Red Bulls, both Ferraris and most importantly, the whipper-snapper. What’s more he got his trademark good start and was up to P3 by the first corner. In a repeat of last season, the Merc’s tyres were quick to fade in the race, but not as conclusively as his gearbox, which denied us the thrill of seeing how far he could test out the new 2012 blocking rules with a friend. Nico had an even better start. Why bother with qualifying any higher than P7 when you can just sashay round people at the start?

Ferrari
Race: Alonso
Season: Fernando Alonso 1 – Felipe Massa 0
A tale of two drivers. One squeezed the most out of his difficult charge, the other made a difficult charge through the field. No sooner had Felipe got past a load of cars than he had to come in for new tyres and overtake them all over again. This could turn out to be Felipe’s Groundhog Day season if they don’t stop his tyres wearing out. Now that Lewis Hamilton is qualifying a long way in front of him he needs to sort himself out a regular Bash Buddy and right now it looks to be Bruno Senna. Athough if Bruno loses interest he can always count on Kobayashi on the way through.
Further forward Fernando Alonso had a great race, aided by Nico Hulkenberg’s race-rusty shove at Mark Webber, that cleared cars out of the way for Fernando to sweep forward. Even so, despite being presented with a gift-wrapped P8 on the opening lap, he looked like he had the pace for P5 or P6 – the only cars that looked quicker than the Ferrari (which weren’t in front of him) were the two Lotus-Renaults.

Lotus
Race: Raikkonen
Season: Kimi Raikkonen 1 – Romain Grosjean 0
Having spent a lot of time developing their dynamic braking system which corrected the ride height of the car – and was banned – Lotus were a bit miffed to arrive in Melbourne and find that Mercedes has a new-fangled gadget attached to their car. That Charlie didn’t have an objection to. You should start going on fishing trips with him, Eric.
As for the drivers – Grosjean produced a brilliant qualifying effort, not too bad a start given that the Mercs are starting maestros, but should have realised he’d been overtaken by Maldonado. Raikkonen put in a good shift at the office. His lap times didn’t drop off nearly as fast as the Mercedes, Ferraris and McLarens and while Lewis was struggling with a 1:36 on Lap 16, Raikkonen was still in the 1:34s. Eric might not be too happy right now but the propsects are bright.